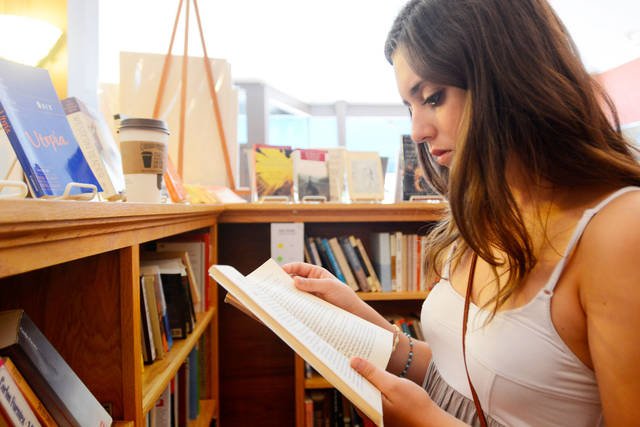 (Photo by Cora Nelson) First-year student Allie Gooley pages through a book Aug. 30, 2014, at Espresso Royale in Dinkytown. "Book and Brew" is the new collaboration between the Book House and Espresso Royale, which now offers books for sale in the coffee shop.

Thousands of books from the Book House in Dinkytown now line the walls of Espresso Royale as the result of a new partnership between the two businesses.

As apartment complexes and chain restaurants began to pop up in Dinkytown, the shops formed a plan to merge their businesses in an attempt to stay afloat financially. Now that both stores have seemingly stable locations after years of uncertainty, they’re collaborating to potentially boost revenue.

The uncertain futures for each store prompted discussions between Zielske and Book House owner Kristen Eide-Tollefson about finding a space together.

But Book House found a new space in Dinkytown last summer and began storing books at Espresso Royale in exchange for rent money. In August, Zielske and Eide-Tollefson decided to take some books out of storage and move them into the coffee shop.

Eide-Tollefson said she’s excited about the new collaboration because it could give her business more visibility. And the partnership feels natural, she said, because coffee and books blend well.

“We wanted to be able to feed that sort of longer, larger tradition of books, conversation [and] coffee that is just an enriching atmosphere intellectually,” she said.

The partnership between the two Dinkytown businesses is relatively informal, Zielske said, and they haven’t yet decided how the money will be split.

Book House manager Matt Hawbaker said he chooses genres based on the kinds of people who frequent Espresso Royale and what he thinks they might enjoy. History, art and poetry books sit on the shelves below displays of works by Shakespeare, Tom Wolfe and Virginia Woolf.

Cultural studies senior Pascal Filatre said he frequents Book House and he’s been going to Espresso Royale for years. He said he thinks the books make a great addition to the coffee shop’s atmosphere.

Jason McLean, owner of the Loring Pasta Bar and Varsity Theater, said he’s glad to see other businesses in the area merge and believes it will result in a more complete experience for customers.

Ultimately, though, the collaboration is still about business. Espresso Royale manager Rex Vogen said the shop has been selling books every day since they hit the shelves, and it’s important to have revenue continue to stream in.

The café is on a month-to-month lease and is still recovering from a fire in its building last fall. The heavy construction in Dinkytown this summer has also added stress to the business, Vogen said.

“It’s not like we’re going out of business or we’re dying or anything like that, but it definitely is a good idea to try something new,” he said.