Minnesota Twins pitcher Joe Nathan talks about what motivates him.

Signing autographs to the delight of fans during team warm-ups at Target Field on Friday, Minnesota Twins pitcher Joe Nathan seemed to be getting his groove back.

Nathan, closing pitcher on opening day, was making his first appearance at Target Field after missing all of last season because of reconstruction surgery on his right elbow.

In an on-field interview, Nathan said his elbow is healing, although it’s not where he would like it to be.

“Some things are definitely improved, other things still need a little bit of time,” he said. “You know, time is ultimately the best healer. As much time and work as you can put in. There [are] still things that need to be done. History shows that this thing takes usually about 16 months. I’m trying to speed that curve along a little bit and get back to full strength as soon as I can.”

The bag of dirt Nathan brought with him and sprinkled on the pitcher’s mound before Friday’s game came from his last pitched inning at the Metrodome on October 6, 2009, against Detroit. He said he’s cared for the dirt all that time. “I had it stored in a safe place and kept it around me during the off-season at home. Then I put it in the trusting hands of Rodney McCormick, our clubhouse guy. He did a good job of keeping it safe for me.”

Nathan, 36, talked about what kept him motivated after being put on the disabled list in March 2010. “There’s always motivation. Anytime you get hurt, if you’re not motivated to get back, then maybe it’s time to hang ’em up. So you got to come in and be ready to put the work in and try and treat each day as a chance to get better for that next day. Fortunately I had some good people around me that helped me on days that I wasn’t as motivated as I should be, to push me along and get me through those days. But, for the most part, we had a pretty good team around to get through this thing.”

Recent spring training helped him settle down, he said. “That first time out there definitely felt a little strange,” he said.

Being with the Twins on the road helped out emotionally as well, Nathan said. “It’s going to be an exciting time when I get the chance to pitch here at home.”

Nathan’s anticipation still runs high. “I think you always expect more. You always want more. I think it’s in our nature to want more but at the same time, it’s as expected. I have to kind of step back and look at a year of uncertainty. I am closing here so I really got to be happy about that and not look at ‘I want more, I want more,’ and just be happy where I’m at,” he said.

Nathan’s happiness returning to pitching at the Twins’ first home stand paid off as the team went on to win 2 to 1. Joe Nathan achieved his record of 250 saves.

Attendance was up slightly at this season’s opener: 40,714 compared to 39,715 on opening day 2010 against the Boston Red Sox. The Twins went 53-28 last season at Target Field, the third-best home record in baseball and tops in the American League. They won 18 of 26 series at home and recorded seven sweeps.

The Minnesota Twins record was 2-4 and the Oakland Athletics were 2-4 going into opening day. The Twins went 6-3 vs. Oakland last season, with eight of the nine games being decided by two runs or fewer.

Infielder Tsuyoshi Nishioka is on the 15-day disabled list after fracturing his left fibula; the Japanese press at Target Field covering Opening Day seemed disappointed. A photojournalist from Japan’s Kyodo News, however, said that he found Minneapolis to be a “very nice city.”

The “Countdown to Cooperstown” banner was unfurled with the number 51 written on it; the number will change each game as it counts down the days until the 2011 Hall of Fame ceremony on July 24 in New York. With the 2011 induction of former Twins pitcher Bert Blyleven, a total of seven players with ties to the Minnesota Twins organization have earned election to the National Baseball Hall of Fame. It was Blyleven’s 14th attempt at being named to the Baseball Hall of Fame. He is a 287-game winning pitcher who ranks fifth on the all-time strikeout list.

The bat used by Twin Jim Thome to hit his 587th home run on September 11, 2010—to pass Hall of Famer Frank Robinson for eighth place on the all-time home run list—was the latest Twins artifact at the HOF.

Tony Oliva threw out the ceremonial first pitch before the Twins home opener to Casey Killebrew, grandson of Harmon Killebrew. The National Anthem was performed by singer Maria Versalles with guitar accompanist Rick Oliva. Bloomington native Rick Oliva also plays for the local bands 8foot4 and World According to Garp, and is a music teacher.

The biggest glitch on Opening Day was the frequency and number of cars on the popular Metro Transit’s Hiawatha Line light rail leaving Target Field.

After Friday’s opener, thousands of fans waited for the train, which came every 15 minutes and typically had two cars coupled together. The cars were so packed that passengers at stations along the route could not board. They usually waited for the next train, but each proceeding train was similarly filled. Riders filled the bike storage area of the train cars, making it useless to the many bikers at Target Field. Passengers with suitcases at the two airport stations just stared when the doors opened and didn’t get on.

The 27 light rail cars hold 66 seated passengers plus standing room for 120. There are four luggage racks and four bicycle hangers. All of those areas were filled with standing riders.  More than 120 passengers were standing on the trains. 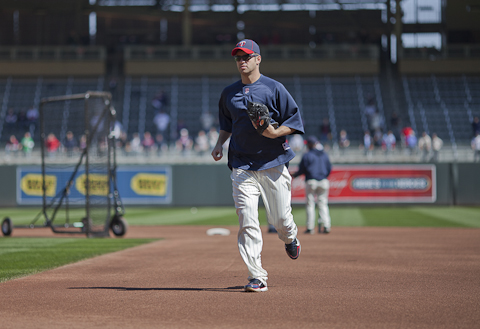 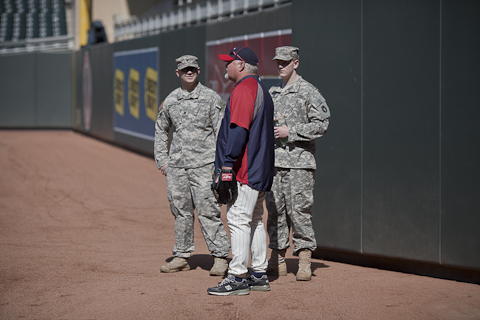 Twins manager Ron Gardenhire chats with members of the military who were at the game to unfurl the American flag.

The “Countdown to Cooperstown” honors and counts down the days to Bert Blyleven’s induction into the Baseball Hall of Fame on July 24 in New York. 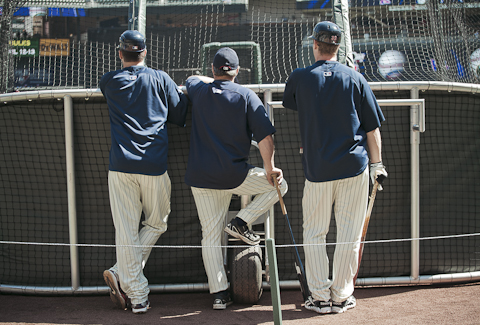 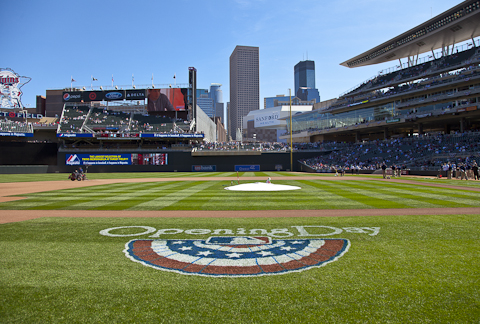 Sun and temperatures in the 60s greeted Target Field on the Minnesota Twins opening game Friday. Much appreciated by fans is the newly installed right field Daktronics Scoreboard and video board. 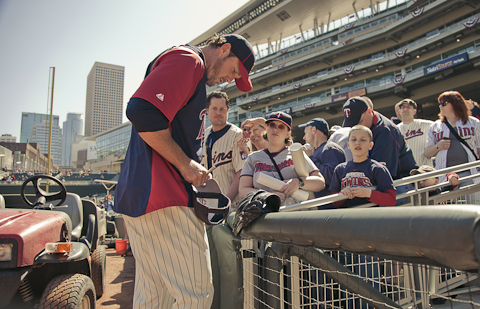 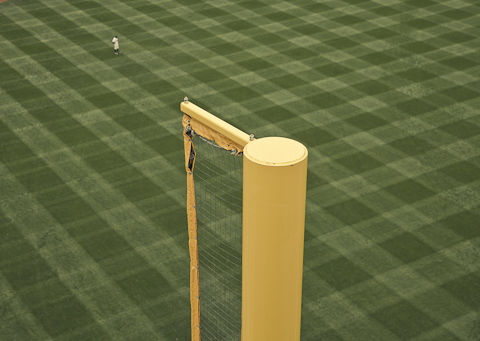 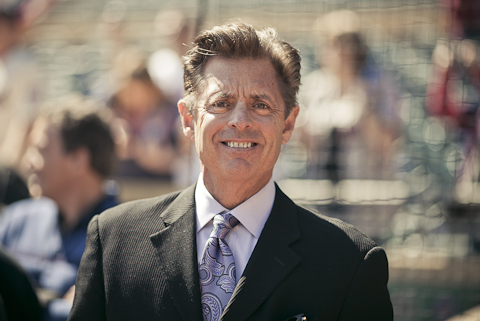 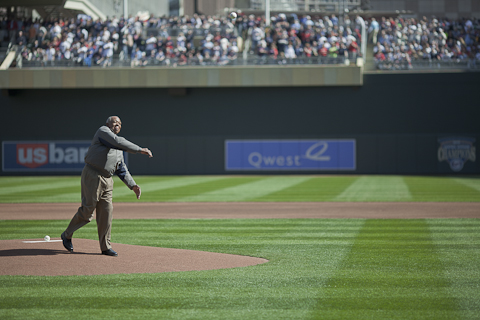 The ceremonial first pitch was thrown out by Tony Oliva and was caught by Harmon Killebrew’s grandson, Casey Killebrew. 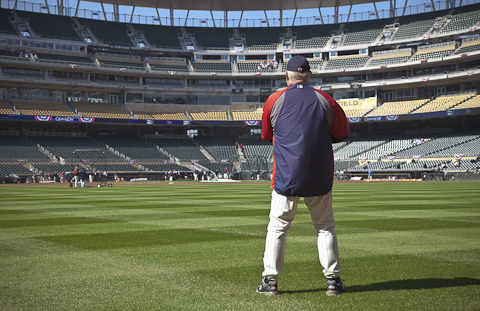 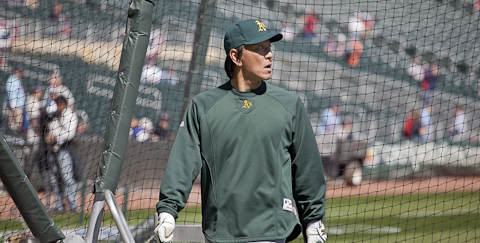 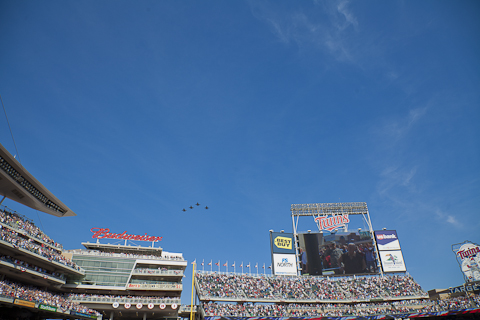 The traditional flyover on opening day over a crowd of 40,714. 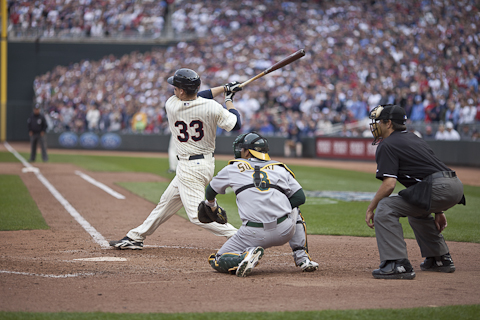 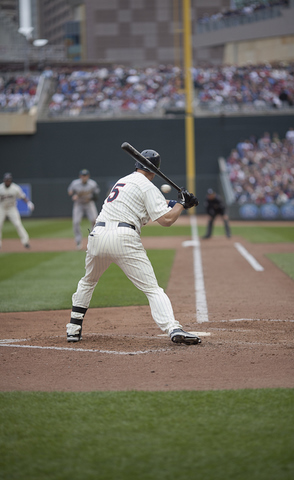 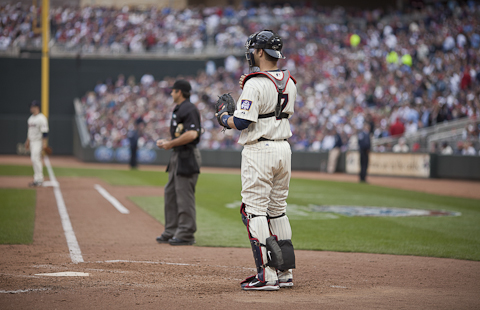 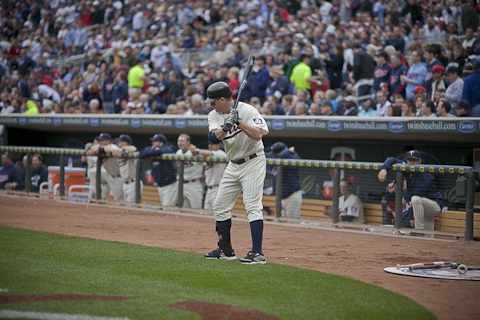 Cliff Pennington of the A’s.

Delmon Young in the outfield. 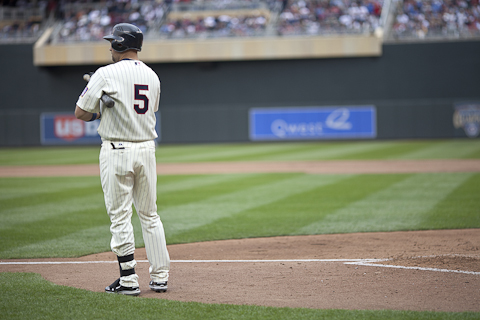 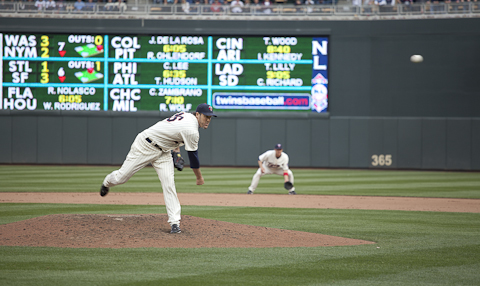