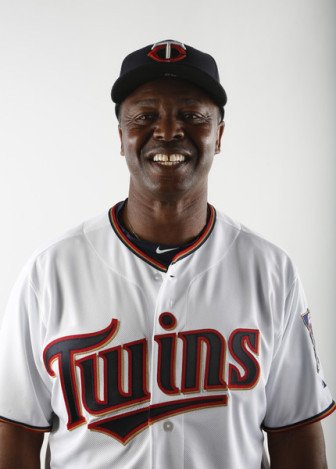 The Minnesota Twins earlier this week opened its 2015 season with a new manager and its first Black coach since 2012. Butch Davis was hired in January as first base coach. Photo courtesy of the MN Twins

“I’m very easy to get along with,” said Davis during a conference call with reporters, including the MSR, shortly after his hiring.

Twins General Manager Terry Ryan said he brought Davis on board for his base-running teaching expertise.

When asked, Davis downplayed the fact that he is the team’s only Black on staff. “I’m not adding to the diversity,” he told the MSR. “I like to think I am just one more staff member. I just want to be on the staff to help make the Twins better.”

Ryan, however, didn’t shy away from the question when asked later: Having more diversity on the staff “was one of the objectives to make sure that we covered all the areas,” responded the Twins GM. “We all believe we have the right people.”

“I know diversity is a big issue,” surmised Davis, “but it comes down to playing baseball. That’s all.”

Nonetheless, with Blacks accounting for barely eight percent of MLB players, and 10 percent of coaches in 2014, Ryan admitted, “Diversity is a huge issue for me. We — I can do better. Everybody would like to improve on this issue because it’s important for our game.”

When Torii Hunter left for free agency in 2007, he unfortunately created a leadership void that existed for six subsequent seasons thereafter. That void finally got filled this past off-season when the Twins re-signed Hunter and brought him back to the organization where he got his pro baseball start back in the 1990s.

“I believe in the man and I believe in his ability, and I believe in his leadership,” admitted Ryan of the multi-time Gold Glove outfielder, who played for Detroit the last two seasons. “We needed a right-handed bat to complement our lineup. Two, he knows what we’re all about and we got a lot of young guys, particularly in the outfield, who Torii can influence.

“I think he will fill a void in a lot of areas, but most importantly the man can still play the game,” concluded Ryan on Hunter.

Of the 12 Final Four teams’ head coaches in the two NCAAs and the NIT, only two were Black — Stanford’s Johnny Dawkins, who won the NIT, and Dawn Staley of South Carolina, the first former WNBA player and the first former college player to play (Virginia 1990-92) and coach in the Final Four.