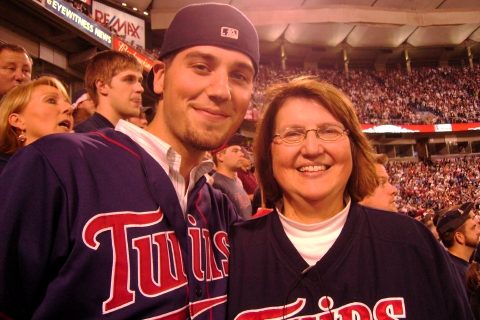 The Twins were seven games out on September 6, but they caught the Tigers by winning 17 of their next 21 games. They became the first team in Major League history to win the division after trailing by three games with four to play. It is good that the Twins had a lead for the entire game on Sunday, because we needed every bit of emotional stamina we had to get through the tie-breaker game on Tuesday.

The Twins had to wait until Tuesday to play the game with the Tigers because the Packers came to the Metrodome on Monday night to face their former favorite Favre. I can’t imagine that the Metrodome has ever seen such a string of exciting games as they have in the past  two weeks. On Tuesday they even honored the Metrodome crew who did such an amazing job of converting the playing field (Mall of America Field, I should day) from baseball to football and back again and hosting over 250,000 fans in five days.

The game with the Tigers started at 4:00. The Tigers took a three-run lead early and held it until the bottom of the seventh inning when Orlando Cabrera hit a two-run homer to take a 4 – 3 lead. The Twins immediately gave up a home run in the top of the 8th to create a 4 – 4 tie. After that every pitch became a possible game-winner. Joe Nathan had runners at first and third in the ninth and no one scored. Cabrera started an inning-ending double play by snagging a line drive and then throwing to home for the third out. The game went into extra innings and the Tigers took another lead in the 10th—and the Twins tied it again in the bottom of the 10th. The Tigers had the bases loaded in the top of the 12th with one out and got out of that jam. Bobby Keppel, the Twins’ eighth pitcher, finished that inning by striking out Gerald Laird after Laird had three balls. A walk would have scored the go-ahead run.

Finally, in the bottom of the 12th, it was Carlos Gomez and Alexi Casilla, two players who have struggled this season, who put together the walk and then the game-winning hit four hours and 37 minutes after the first pitch. It was a storybook ending to an unbelievable game. And now we are playing the Yankees in the first round of the playoffs. It is almost anti-climatic after the amazing run the Twins have had in September and early October. I was so physically and emotionally drained on Wednesday that I didn’t feel I could watch another game. Can you imagine what the players were feeling?

There was a cold windy rain all day Tuesday—if the game had been scheduled for Target Field we wouldn’t have played. Of course, we also would not have had to bow to Monday Night Football and would have played on Monday. There was so much rain on Tuesday that towards the end of the 4½-hour game water was actually dripping from the speakers over our section in the Home Run Porch, appropriately landing on two outspoken Detroit fans. It was dripping in a couple of other spots too, including center field where we saw Gomez glancing up at the ceiling at one point. It made me happy to be in the relatively dry Dome but glancing nervously up to that teflon roof at times.

I think everyone who experienced that game felt that it was the best game they have ever seen. I wondered several times how anyone could say that baseball is boring.  There were times when I couldn’t watch, but I couldn’t not watch. The emotional roller coaster of that game was unbelievable. I literally would just shake my head in amazement every time the Twins did something to keep the game alive. The fans were pulled to their feet time and time again doing everything they could to bring in that winning run or get that third strike. As my sister-in-law said after the game, “We just were part of baseball history. Some day Ken Burns will be talking about this game.”