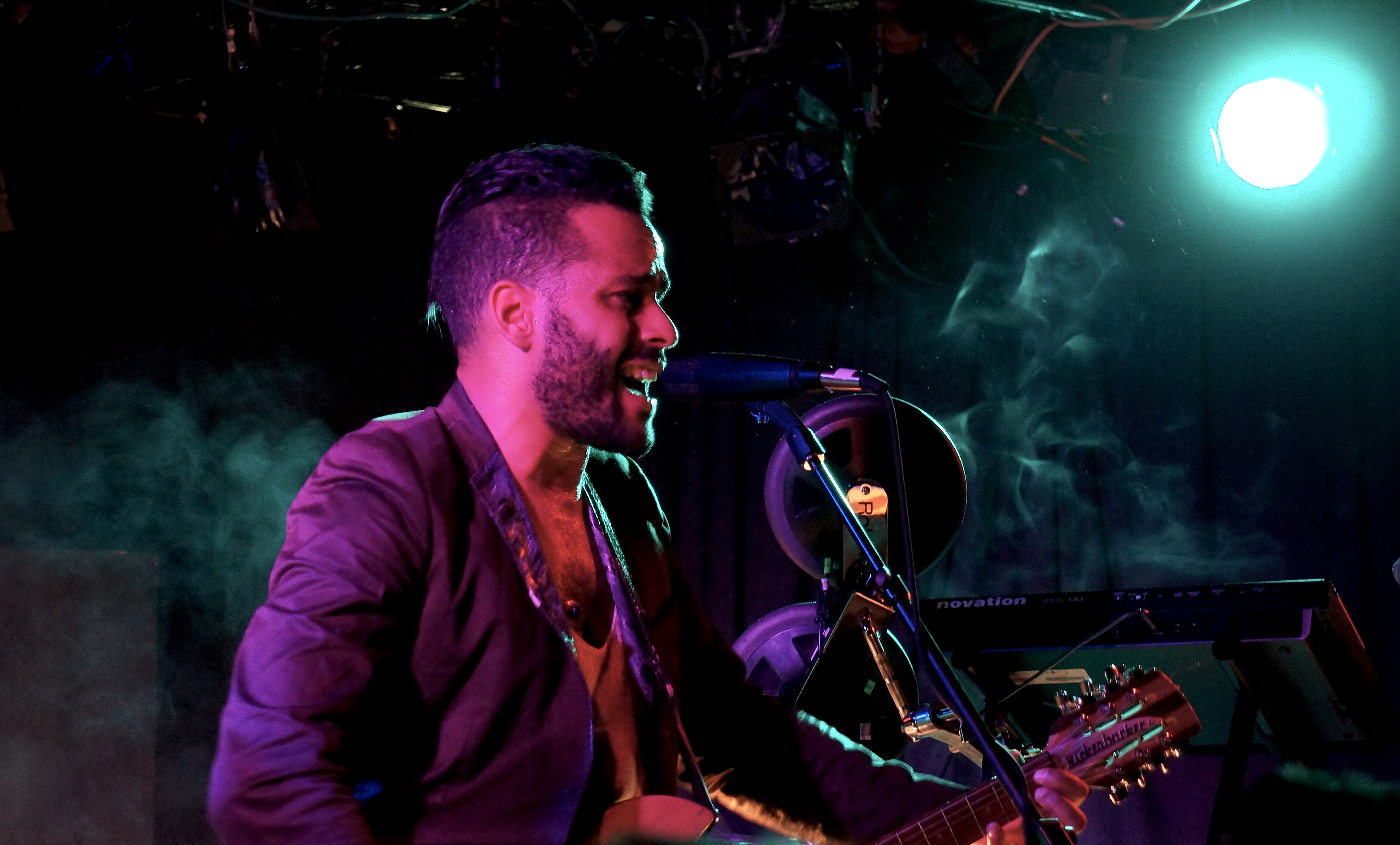 Twin Shadow—the name that George Lewis Jr. performs under—is a complicated man. Perhaps embodying the archetype for what means to be a “modern man” in today’s society. Lyrically the protagonist in the songs comes across as a man yearning to let his emotions spill but hiding behind a wall of misogyny, not willing to put forth the effort to let someone in.

George Lewis Jr. is “model hot” but with the bad boy vibe. He’s the type that could whisk you away on the back of his motorcycle but then take you to a secluded area and sing you on a song.

All of this is important because Twin Shadow isn’t just a band or a performer that shows up and plays a single you’ve had on repeat this summer (although he could—his songs are endlessly infectious). It’s an entire package that makes his live performance worth going down to the 7th St. Entry on a Monday night and packing yourself into a sold-out crowd.

As soon as the band started playing “Shooting Holes” it was immediately apparent why it is such a treat to see them live. His records are great but they are recorded entirely by him writing and playing all the instruments. In a live setting they come alive by the energy brought by a full rock band. Striking a balance between new wave rhythms and 80s synth vibes with the ability to totally rock out when needed. And rock out they did while launching into “Five Seconds” probably the bands biggest single to date, putting that song so early in the performance showing that he was confident that they weren’t going to have to rely on crowd favorites to garner applause later in the show.

In between songs the affable Lewis entertained the crowd with a quip about the Twin Cities. “This is a generalization…forget it” Lewis stopped but was prodded to continue by the screaming crowd. “It’s been a while since I’ve been back to Minneapolis. I like a big girl every now and then, but I’ve got to say you guys are really in shape. I thought the Midwest was just the opposite. You guys look like it’s all together. I don’t mean to put the big girls and boys out, I like you too.”

Engaging and magnetic the show continued, moving into a slow burning block of songs including “Golden Light” and “When We’re Dancing.” Fog swirled and danced around the band during “I Can’t Wait,” mixing with the warm glow of lights creating a chiaroscuro effect, enhancing the feel of a party you’d find in a Bret Easton Ellis novel, dangerous yet sexy at the same time, as Lewis sang, “Her face to me, I see she’s asking for a dance / You know she loves my moves”, as if he were seducing the entire crowd at once.

The evening wasn’t all love soaked slow jams. He brought the energy back up with the funky drum line beats in “Patient” a standout from his newest album Confess. “ Run My Heart” was absolutely heart breaking when the bridge found Lewis breaking from his usually tender and smooth croon into a throated repeated scream of “I’m not in love / I’m not in love” as if he was trying to convince himself.

Lewis continued to connect and deliver a towering performance while they played fan favorites like “Slow” and “Castles in the Snow” the audience hooked on each note played and word spoken. During the last song of the evening “At My Heels” he whipped the crowd into singing along with the chorus turning his microphone jutting out over the crowd while the band played and people danced and sang a long.

At the end of the night it was evident that Twin Shadow continues to be the complete package: endlessly confident, charismatic and talented, delivering an exhilarating performance that many bands could only hope to achieve. Even though he sings songs about the struggle between embracing your feelings and pushing them aside, he has found a way to connect with audiences and judging by the Entry’s reaction he’ll have no trouble finding people to embrace him wherever he goes.