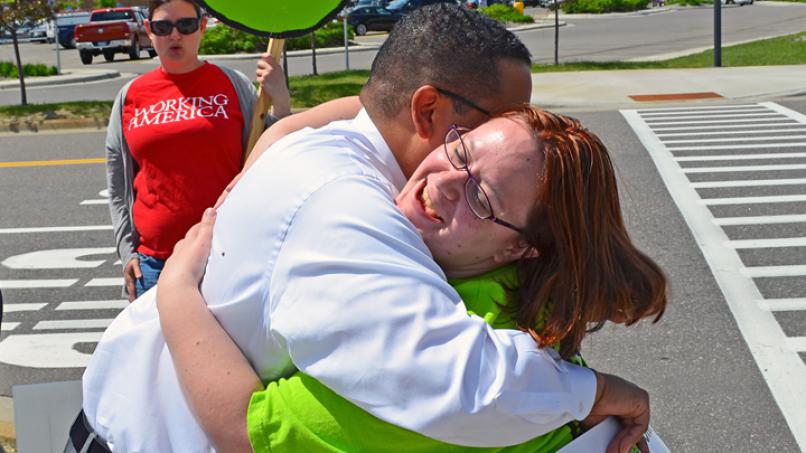 U.S. Rep Keith Ellison hugs Cantare Davunt, who walked out of her job at Walmart in Apple Valley to join the OUR Walmart strike. (Photo by Michael Moore)

Walmart associates from Apple Valley and Brooklyn Center walked off the job Wednesday, joining another nationwide wave of strikes and demonstrations targeting the world’s largest retailer for its low pay and retaliation against workers looking to organize.

Similar strikes took place in 20 other U.S. cities, as members of the workers’ group OUR Walmart built up momentum for demonstrations Friday outside Walmart’s annual shareholder meeting in Fayetteville, Ark.

Twin Cities supporters, including U.S. Rep. Keith Ellison, demonstrated outside the Walmart in Brooklyn Canter. They rallied around Cantaré Davunt, an Apple Valley associate and one of three local OUR Walmart members who joined the strike.

“I walked into work today and told them I will not be coming in, even though I was on the schedule” Davunt said.

Two workers at the Brooklyn Center store walked off the job earlier this week. They traveled to Arkansas and were scheduled to take part in protests outside Walmart’s shareholder meeting, OUR Walmart organizer Diana Tastad said.

Strikers nationwide are demanding Walmart pay $25,000 a year for full-time work, reinstate workers who have been fired for taking part in OUR Walmart activities and end its campaign of retaliation against workers standing up for a voice on the job.

“I’m on strike today to end retaliation,” Davunt said. “I’m tired of seeing (OUR Walmart) members and other associates bullied in the workplace because they want to speak out. We want Walmart to end the retaliation so we can finally live better.”

The midday demonstration in support of striking workers drew about 30 people, including clergy, other low-wage workers, small business owners and supporters from the labor community. In addition to ending retaliation, demonstrators called on Walmart to raise wages and provide more stable scheduling, so that working parents are better able to balance work and family commitments.

A DFLer from Minnesota’s 5th Congressional District, Ellison and his staff have become a fixture of local Walmart walkouts, providing assurance to workers that they have the right to strike – and warning Walmart that it is illegal to retaliate against workers who participate.

“Our country has been made great because of courageous people like you,” Ellison told Davunt. “I want you to know you’ve got the love, affection and appreciation of people all over this state and this country.

“If anybody messes with you, we want to know about it right away. We’re going to do something about that because it’s retaliation.”

The NLRB last year charged Walmart with illegally threatening, disciplining and firing workers for participating in OUR Walmart protests and strikes – charges the retailer is currently fighting in court.

Among the incidents included in the NLRB’s case against Walmart is the disciplining of an associate in Sauk Centre, Minn., who joined an OUR Walmart strike one year ago. Mike Ahles, who took part in protests surrounding the company’s 2013 shareholder meeting, received a “coaching” – Walmart’s term for disciplinary action – from his manager for missing work. After three coachings, a worker can be fired.

Davunt said she’s seen too many “coachings” come on the heels of workers speaking out.

“If you do something to speak out, they’ll find a reason to coach you,” Davunt said. “It’s scary when you can’t afford to run the risk of losing your job and your income.

“I’m not afraid because I believe no matter what Walmart chooses to do, I’m doing the right thing. There are too many people who are scared to speak up, so I’m doing this for them too.”