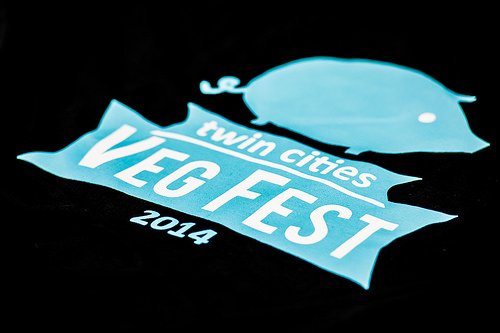 When Sal Kravik became a vegan 12 years ago, she didn’t eat the way she does now.

“When I first changed my diet … there were so few options,” Kravik said. “Vegan cheesecake was not a thing.”

Now Kravik volunteers for Compassionate Action for Animals (CAA) and wants people to understand that living the vegan lifestyle doesn’t mean eating bad tasting food. And the word is spreading.

The nonprofit, which advocates empathy for animals and a move towards plant-based diets, held their third annual Twin Cities Veg Fest on Sept. 28 at the University of Minnesota with record high attendance. About 2,300 people attended the festival, which hosted a variety of vegetarian and vegan vendors.

The Herbivorous Butcher, which creates vegan substitute meat, made their debut at Veg Fest this year. Co-founders and siblings Kale and Aubry Walch started selling the homemade meat at farmers markets this year after friends convinced them that people would buy it.

“We didn’t think we would sell anything the first day,” Aubry Walch said. “By the end of the weekend, we had sold everything we made.”

“It’s so exciting. It goes to show that times are changing and minds are changing,” she said. “People are opening their minds to compassion, health and the environment. It gives me faith in our future as people.”

The Animal Rights Coalition’s vegan boutique Éthique Nouveau made an appearance as well. The group works to end the suffering, abuse and exploitation of non-human animals through information, education and advocacy. Éthique Nouveau carries products like shoes, purses cosmetics and soaps, that are created without the use of animal testing or animal products. And all of the purchases help fund animal advocacy programs.

Wisconsin native and University of Minnesota student Dustin Seiltz said he started volunteering for CAA three years ago. He grew up on a farm but became a vegetarian and then a vegan because he thinks the carnivorous relationship people have with animals is cruel.

“In middle school, I got made fun of sometimes,” Seiltz said. “But it was important to me so I wasn’t going to hang out with people who were harassing me for my beliefs.”

Seiltz said he discovered CAA when they were handing out free vegan food to students on the university campus. He said that he appreciates how the organization focuses on the positive sides of the issue without making people feel bad about themselves if they have different views.

Registered dietician Kristina DeMuth spoke at the festival about the benefits of eating a vegetarian diet.

“People seem afraid of being nutritionally deprived or missing out on their favorite foods,” DeMuth said. “If you stock your shelves right, it’s not that different. It just doesn’t include animal products.”

Many favorite foods can be reproduced as vegetarian or vegan, she said, you just need to “veganize” them.

Hamline University professor Mark Berkson said when he became a vegetarian 20 years ago, he wanted to do more than just refrain from eating meat; he wanted to educate others about the benefits of vegetarianism.

“One of the most important things that come out of an event like this [is] … just to be more conscious about what we eat and wear and the impact on other beings and the environment,” Berkson said. “Every action we take has an ethical component to it.”

CAA executive director Unny Nambudiripad said he used to get angry with people for not agreeing with his beliefs, but since then has realized it’s important when campaigning for vegetarianism to be compassionate to others beliefs.

“People are much more likely to change if they see that other people are also embracing vegetarianism and if they taste really wonderful food. And if they’re presented with resources in a positive light,” Nambudiripad said.

As for next year’s festival, Nambudiripad said they need to find a bigger venue to accommodate all the people and the growing number of vendors. And they’ll also be looking to improve cooking demos, he said, now that they have the 2014 demos under their belt.

For more information and upcoming events, check out CAA’s website at www.exploreveg.org.