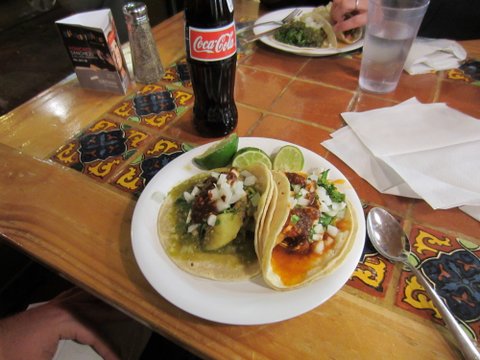 Ten of us began our quest in the heart of one of the oldest Latino neighborhoods in the Twin Cities: St. Paul’s West Side. Our mission: to test the tacos nominated by TC Daily Planet readers, friends, family and other assorted taco fans as  “top tacos in the Twin Cities.” Most of the taste testers had enjoyed tacos in Mexico and the United States, and one had eaten tacos on five continents during military service. Our first expedition visited two restaurants in St. Paul — more to come later! 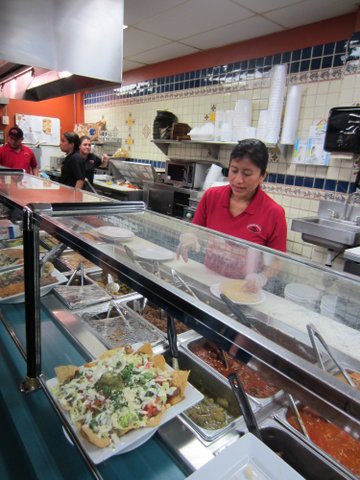 Tacos are assembled to order at the counter (photo, below), with your choice of spice. The fillings are guisados (stewed meats and vegetables), which are an essential part of Mexican cuisine. Spicy beef and spicy chicken tacos got good reviews, moist and leaving a satisfying “after burn” taste in the mouths of the meat eaters in the group. The vegetarians were pleased with their tacos too, describing the mixture of veggies (sautéed greens, mushrooms, and corn) as “unique.” The barbacoa got a less favorable review: “It was dripping wet, but the beef was dry — like the sun was shining but it was raining.” Tacos were a bit pricier here than at some other venues, at $2.50 each. The variety of salsas available at the fresh salsa bar was a hit. As a bonus, the café is adjacent to a well-stocked Mexican grocery store where you can procure your own ingredients to whip up some  tacos at home.

A few blocks away, across the street from Boca Chica’s famous restaurant, their more recently opened Taco House bustled with activity. The building resembles a fast food taco restaurant, with a red tile roof reminiscent of Taco Bell. We left our orders at the front counter and they were brought out  to us as they were prepared. As we tasted the tacos, there were more and more reminders of Taco Bell: ground beef instead of shredded meat, a lack of spice, a “salsa bar with eight containers of salsa that all taste the same.” One of the group, speculating about the building’s possible history as a former Taco Bell restaurant, quipped, “They must have just left the recipes behind.” Most of us, aficionados of Mexican-style tacos, were disappointed. Not so our veteran transglobal taco taster, who declared he’d “never had as good a fried taco as here.” Other than fried taco fans, we decided we would recommend this place “if you want the Taco Bell experience but on the West Side,” or if you are looking for cheap tacos, as these were $1.19. The absence of Latino customers reinforced our conclusion that this venue offers American style tacos.

We hope you’ll try them and tell us about your experiences, and about your own favorite St. Paul taco places.

If you enjoyed this article, you might also like Taquerias Sabrosas: Andale in Richfield and Maya Cuisine on Central Avenue Northeast in Minneapolis.