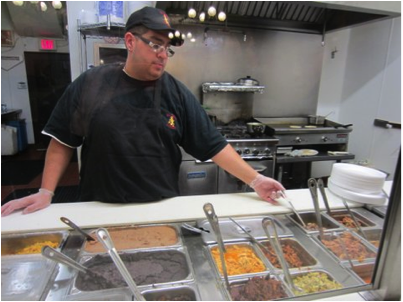 When we walked in, those of us who have been in Mexico felt an immediate rush of nostalgia for its cenadurías (economical hole-in-the-wall dinner places). There were Mexican soap operas on the television in one corner, mariachi hats and cattle skulls hanging on the wall, the walls themselves had been decorated with sponge-painting techniques that are passé here but in style in Mexico. 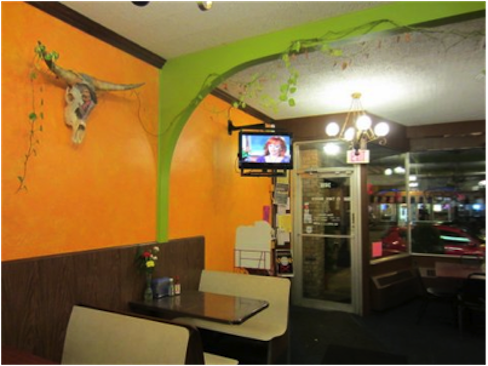 The clientele were all speaking Spanish, and all signage was in Spanish as well. The bathroom paper towel dispenser had even been programmed to dispense a mere 5 inches of paper towel, instead of the more wasteful American-style 18 inches. (It’s funny what you miss after having been out of a favorite place for a while!) 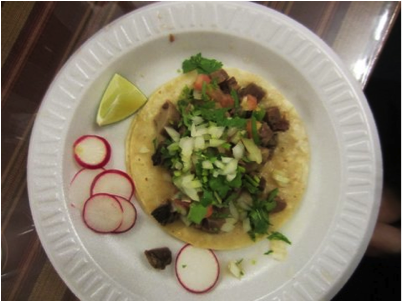 Getting back to the food…The menu also featured the kinds of tacos we had seen during our travels to Mexico, including guisados (stewed meats and vegetables which are staple Mexican fare). Taco choices such as tripas (intestines), chicharrones (pork skin) in red sauce, lengua (tongue), and chorizo (spiced sausage) reminded us of Mexican dishes. 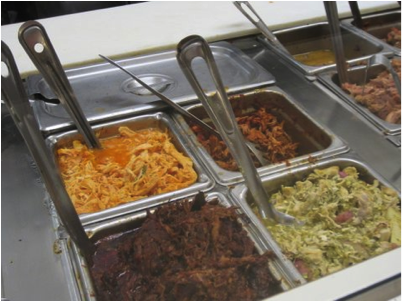 Among our group, the favorite dish seemed to be the chorizo which was, “Really good, spiced well, moist, with a nice bite to it…with a cumulative spicy effect. Love it!” The tripas were described as having “good flavor” and “tender.” The counter set-up where toppings could be chosen and added was seen as a plus.

The vegetarians among us were disappointed however, as the only veggie option was a giant burrito deemed to be “too overwhelming.” The chicharrones also got negative reviews, “Like eating a big piece of fat.” However, we would recommend this place especially for adventurous carnivores and Mexicans, or fans of Mexico, nostalgic for the old country. 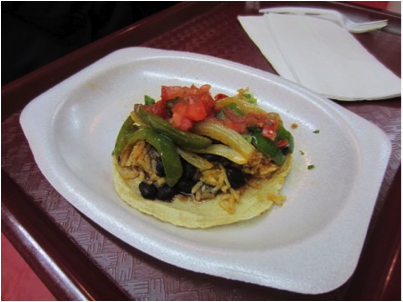 Vegetarians and meat eaters alike were pleased with the options here. As mentioned in a TCDP review, this is a new restaurant. Reaffirming Jeremy Iggers’ experience here, we enjoyed the items mentioned in his article as specialties: homemade tortillas, described as “girthier,” and homemade tamales. 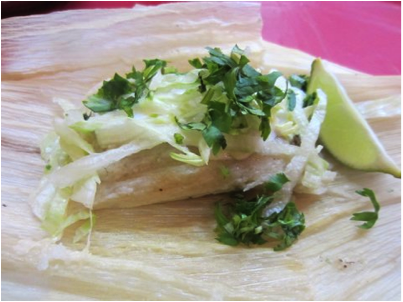 Vegetarians in the group were pleasantly surprised by the wider than normal array of vegetarian tamales including their “excellent” spinach, mushroom and cheese tamales and their unusual flavors of sweet tamales including pineapple-coconut-raisin, and strawberry-peach. We also noted that the tamales seemed very fresh and were not greasy, as can unfortunately happen. 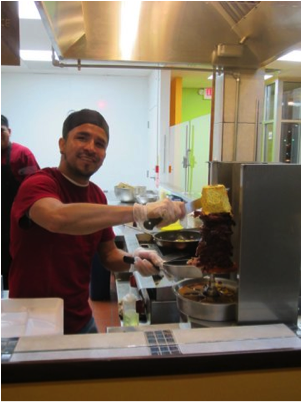 We encountered exceptionally friendly and attentive employees, who seemed to be having a great time cutting meat off the kebab to make Al Pastor tacos at the grill and enthusiastically offering us free samples of their delicious flavored waters. We found the coconut water to be especially tasty. The Al Pastor tacos were described as, “good, authentic options.” 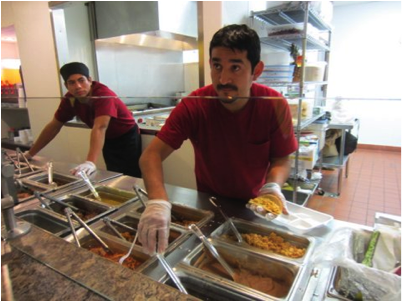 Overall, one of us noted, “They definitely win on the friendly scale.” The atmosphere was perhaps less homey and Mexico-nostalgia-inducing than El Taco Riendo, but clean, bright, and cheerful nonetheless. In conclusion, we decided this was one of our favorite places of all the ones taste-tested, especially for its friendly atmosphere and the fact that it satisfied all, regardless of carnivorous or vegetarian preferences.