Amina Hassan hasn’t felt this helpless in a long time. A refugee who fled Somali 20 years ago and now an American citizen, the middle-aged single mother can’t send remittances to her impoverished relatives in Somalia anymore.

Hassan is one of thousands of Minnesota Somalis who have despaired ever since the shut-down of Somali-owned money services businesses (MSBs) in the Twin Cities two weeks ago.

Hassan has a sister and three cousins in Somalia, aged five, six and nine. The children’s father – her uncle – recently died, and the family is homeless, she said.

“They don’t know what to do. They live on money we send monthly to buy food, and they will not have money next month,” she lamented. “We don’t know what we’re going to do, we’re just waiting for Allah, for God.” 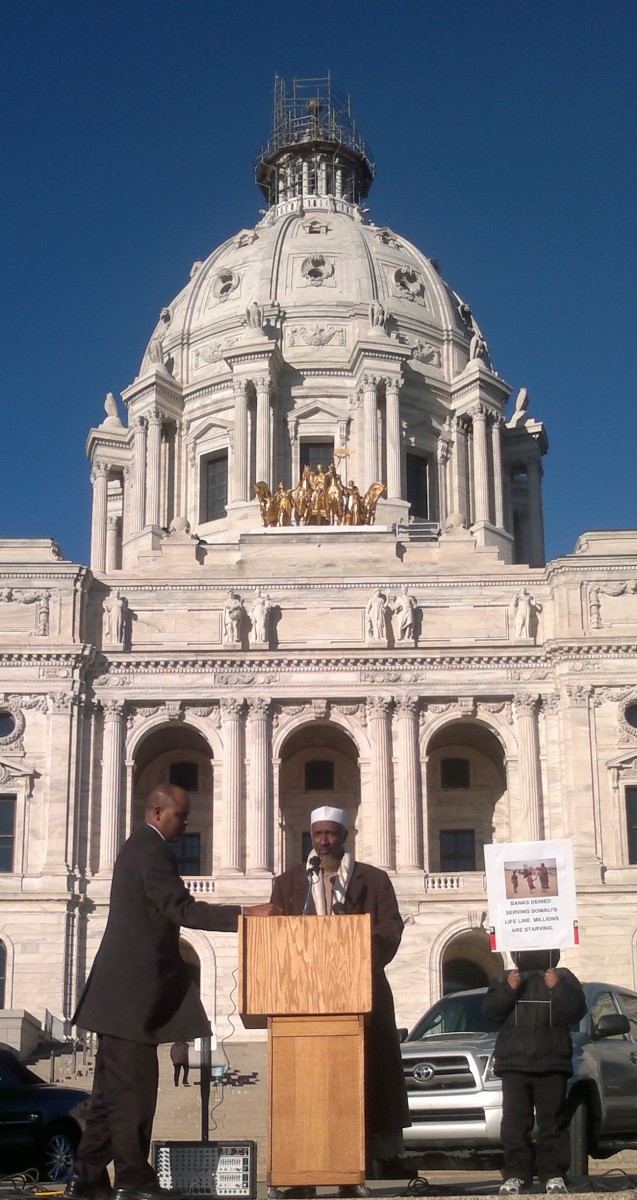 Hassan was one of about 200 mostly Somali and Oromo protesters outside the State Capitol last Friday, January 6, demanding that the state and federal government come up with a solution to allow Africans in the diaspora to send remittances to loved ones in the Horn of Africa.

Sunrise Community Banks, the last Minnesota bank to work with Somali-owned money services businesses (MSBs), stopped transferring remittances abroad on December 30. The Somali community has scrambled to figure out alternatives ever since.

“My community has been in chaos these past few weeks,” said Hinda Ali, community organizer with the Somali Action Alliance and board member of the Somali American Money Services Association (SAMSA). “Everyone is in pain because they don’t know what they’re going to do when the next month comes.”

Since they first starting operating in the Twin Cities about 15 years ago, MSBs — colloquially known as “hawalas” — have been the only option for Somalis in the diaspora to wire money cheaply and efficiently to relatives. Typical money-transfers, such as Western Union and Money Gram, don’t operate in Somalia because the country has no functional banking system. Somali-owned MSBs operate like a Western Union, but they can reach the most remote places — refugee camps, villages, deserts — that other banks can’t.

“Hawalas are everywhere, you can send money to China, to Australia, and it will get there in 10 minutes. Guaranteed,” Ali said. She added that Eritreans, Ethiopians, and Kenyans also use the system.

Somali families typically send between $50 and $200 on a monthly basis to support the livelihoods of relatives in the Horn, she explained. With Somalia’s 20-year civil war and two famines in the past decade, the hawala system has served as the lifeline for the Somali diaspora.

“People [in Somalia] are surviving because of the little money they get from the U.S. through the hawala,” said Ali. “For the diaspora to sustain a country for that long through a hawala system has been proven effective.”

Despite this, there have been growing fears that Somali-owned MSBs may help facilitate terrorist activity abroad. Concerns heightened after two Somali women from Rochester, Minnesota, were convicted last October of sending money to the terrorist group al-Shabab in Somalia.

As a result, banks in Minnesota, Ohio and Washington State — all centers of Somali refugee population — have stopped working with Somali-owned MSBs.

The closures aren’t new. Most corporate American banks cut off ties with hawalas in 2005, after Congress passed stricter banking regulations in a post-9/11 era. The regulations designated MSBs as “high risk.”

Abdirahman Hassan (no relation to Amina Hassan), an MSB manager and SAMSA secretary, said he thinks the “high risk” designation is arbitrary. Somali-owned MSBs operate like any other MSB, and require clients to provide identification before wiring remittances, he said. Hassan also explained that Somali MSBs pay insurance fees and have independent financial audits, like any other MSB.

“It’s absolutely safe and we have bigger scrutiny than even the big banks,” he said. “We’re regulated by the state and federal government, we comply with the Bank Secrecy Act, we have anti-money laundering programs, we have licenses with every state that we operate in, and we’re 100 percent legal.”

From Somalis in the United States, $100-120 million in remittances is sent every year through MSBs, part of a global two-billion-dollar industry, Hassan said. He added that the term “hawala” is actually a misnomer, since hawalas are informal businesses. Technically, hawalas don’t even exist in Minnesota, he said.

“Somali MSBs have been in the U.S. for almost 15 years and the only incident were those two ladies,” he said of the Rochester women. “But, people can send illegal money to non-Somali businesses, [too]. … The difference is Somali-owned banks … were targeted.”

Others in the community are concerned the closures will hurt Somalia’s economy and trigger international hawala closures.

“[Banks worldwide] will follow suit because the U.S. is the big player,” said Abdiaziz Hassan, Somali Action Alliance communications director. “If the U.S. closes, others will do the same.”

For Ali, an immediate concern is Al Shabab, which might use the closures as an opportunity for propaganda, she said.

“Al Shabab is very well funded. People have nothing during a famine,” she said. “If Al Shabab is the only group that can get them money, then, not because of a principle but because of a need, they will join Al Shabab. It’s survival.”

“It’s scary. It’s crazy,” she added. “But we are working hard, with all levels of government. I just hope we find a solution.”

CORRECTION: From Somalis in the United States, $100-120 million in remittances is sent every year through MSBs, part of a global two-billion-dollar industry,