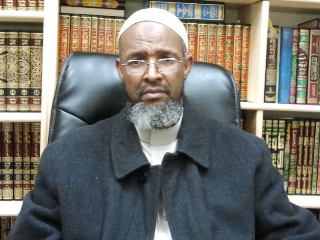 Ahmed Burale, imam of Masjid Omar mosque in Minneapolis, poses for a photo after a TC Daily Planet interview in the mosque office (Photo by Ibrahim Hirsi)

The growing Somali-American businesses, emerging leaders and professionals, and dozens of community and Islamic centers in the Minneapolis and St. Paul have punctuated the success stories of Somali-Americans in Minnesota over the past 15 years.

But it’s also undeniable that some Somali-Minnesotans have shown the state a dark side of gang violence, sex trafficking and terrorism cases, which community members say have tarnished their reputation.

The community’s young people, age 18 to 27 years old, reportedly have committed most of these crimes.

I spoke with Sheikh Ahmed Burale, imam of Masjid Omar mosque in Minneapolis, and Somali Action Alliance Executive Director Hashi Shafi about advice they would offer young Somalis in Minnesota.

The following is a translation of our conversation.

Ahmed Burale: Seek knowledge of your Islamic religion. If you have the right understanding of your religion, then you have all the basics of life. Once you acquire your religious knowledge, the worldly education gets easier for you. It teaches you how to respect yourself and others, how to be kind and compassionate. You’ll be disciplined. But most importantly, find the right people, who don’t give the wrong interpretation of the Islamic teaching.

Hashi Shafi: Take advantage of your youth and get a college education — it will set you free. Many people in the community don’t have the opportunity to attend colleges and universities. Many come to the United States in their 30s or 40s with children. It’s really hard for them to attend college as they work to feed kids. I would encourage you, young men and women, to do anything to get a college degree. That’s the only way you can be competitive and be somebody in this country.

Ahmed Burale: Take the best out of the American culture. Be inspired by America’s leading scientists, politicians, engineers, civil rights activists, and other successful people. Despite their race and religion, follow their paths to success. Never embrace those who would lead you to gang, drugs or terrorism — it doesn’t matter whether they’re the same skin color or speak your mother tongue. 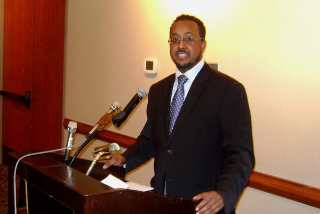 On responsibilities and rights

Ahmed Burale: Stay out of trouble. Never think of breaking a law, no matter how small you think it is. No crime is too small. The United States isn’t like Somalia. This country has tougher consequences for felons. Once you break a law, you go to jail. And once you serve time in prison, it’s hard to put your life together again — no one will hire you for a job, no one will rent a house to you, no one will ever trust you again…not even your own community or family.

If you’re a citizen, then you need to see yourself as an American and that the country is also your country. It’s where you live, where you work, where you will start families and have children. Respect its law and order, and abide by them. That’s what your Islamic religion and culture teach you. You can be a good Muslim, keep your Somali language and culture, and at the same time, be a good American who contributes great things to this country. Be all you can be: imam, doctor, lawyer, journalist…whatever your dream might be.

Hashi Shafi: Know your rights and responsibilities as an American citizen. You’ve all the freedoms and opportunities as any other American. Therefore, you should not feel that you’re a second-class citizen. You’re not just a guest in America — you’re an American.

Remember that the problems you left in Somalia still persist. Somalis are still fighting a civil war. Don’t go back to Somalia to fight. You’re not helping anyone in Somalia by going back and shedding more blood.