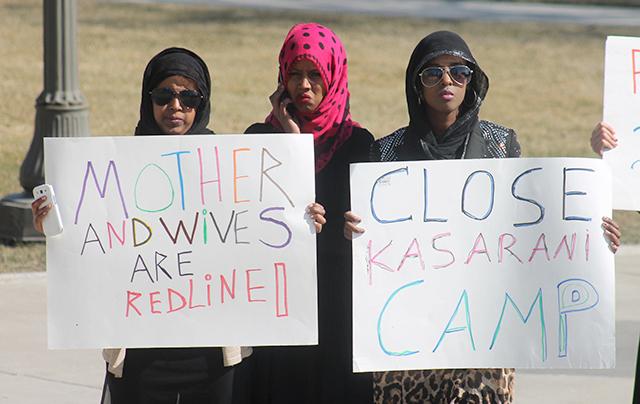 Nearly 100 picketers joined the Friday demonstration in St. Paul, condemning actions by Kenyan government and demanding the release of those detained. (MinnPost photo by Ibrahim Hirsi)

After members of the Twin Cities’ Somali-American community said their afternoon prayers Friday, they gathered at the state Capitol to express solidarity and demand justice for relatives in Kenya.

Reports from human rights groups, news stories and communications with relatives describe abuses against Somalis in Eastleigh, a suburb of the Kenyan capital of Nairobi that is known for its large Somali population.

As part of an ongoing counter-terrorism crackdown, Kenyan security forces launched house-to-house searches in Eastleigh last Monday. They forcefully snatched people from their bedrooms in the middle of the night, put them in trucks and took them to jails and detention centers.

Thousands have been arrested and scores expatriated to war-ravaged Somalia, according to news reports. Among the arrested are pregnant women, children and seniors.

Nearly 100 picketers joined the Friday demonstration in St. Paul, condemning actions by Kenyan government and demanding the release of those detained.

Jibril Afyare, an activist who organized the demonstration, said the event was meant to raise awareness and ask the U.S. government to intervene and stand with Somalis in Kenya.

“The Somali refugees and Somali-Kenyans are under siege,” Afyare said. “They’re detained illegally in mass numbers. We demand the Kenyan government to stop the human rights violations and crimes against humanity.”

Fatush Ibrahim, a demonstrator and a longtime St. Paul resident, said in an interview that her brother was arrested in Nairobi last week. She said Nur Ibrahim was born in Kenya and had his identification documents at the time of the arrest. No one asked him to show an ID, she added.

“They forced my brother into the car,” she said. “They abused him verbally and physically.” He was taken to a Nairobi jail cell, flooded with sewage, and later released, she said. 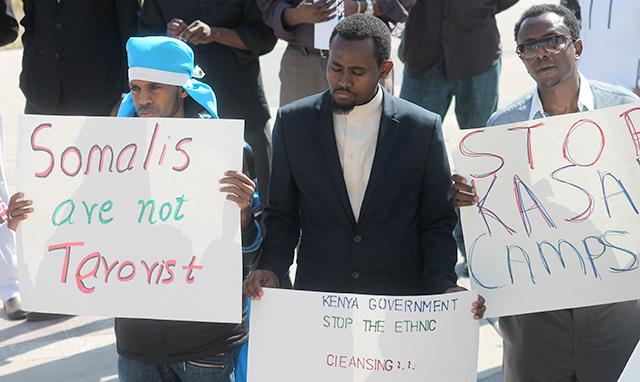 Jibril Afyare, an activist who organized the demonstration, said the event was meant to raise awareness and ask the U.S. government to intervene and stand with Somalis in Kenya. (MinnPost photo by Ibrahim Hirsi)

When the civil war erupted in Somalia in 1991, hundreds of thousands of the people ended up in Kenya in search of protection and stability.

They went on to established a vibrant community and successful businesses, transforming the nearly deserted Eastleigh into the site of high-rise commercial and residential buildings and an economic hub that generates millions of dollars in tax revenue for the Kenyan government.

But Somali immigrants have long been subject to ethnic abuse by government forces, according to reporters from human rights groups.

The ongoing manhunt for Somalis in Nairobi has sparked a string of attacks in the city. The Kenyan government says al-Shabab, the Somali-based militant group, is behind these attacks. 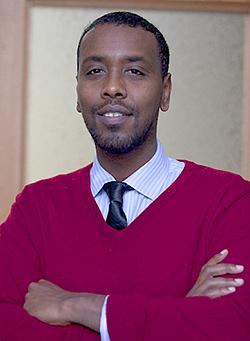 While other speakers and demonstrators aimed comments at lawmakers inside the state Capitol, Warsame told the crowd that no one will come to their rescue if Somalis don’t stand up for themselves.

“Since I was born, Somalis are at war with themselves,” said Warsame, whose mother lives in Mogadishu and daughter in Nairobi. “We always protest, even though the problems come from us. The Senate can’t do anything for you. No one will help you if you don’t help yourselves.”

Another speaker, state Rep. Karen Clark, said many state leaders don’t know about the issue, but promised she will help write a resolution demanding freedom for the Somali people in Kenya.

“I just learned about it today,” she said. “I’ll make sure that my colleagues know about this; it’s something I want to pledge I will work with you, also. I’m outraged by what is happening in Kenya.”

Kenya receives $652 million in U.S. foreign aid each year, the largest amount of any African country, according to a 2012 report by the Congressional Research Service.