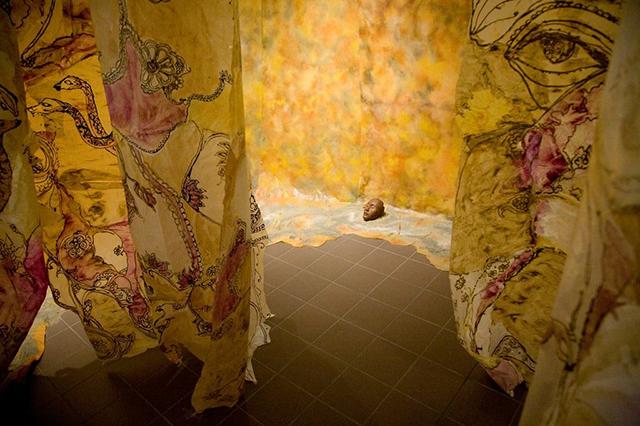 Have you seen the tree trunk standing before a corner house where Hague Avenue intersects with Pierce Street north in St. Paul?

That elm tree was alive and flourishing for many years, until it succumbed last year to root diseases. The City of St. Paul responded with cutting tools and a plan to level the tree to the ground. But Hend Al-Mansour, Saudi-born artist whose house faces the tree, presented the city crew with a different idea: Leave the trunk untouched so she could paint on it.

Al-Mansour, 57, is a veteran artist, whose work has been showcased nationally and internationally, including in the United States, the United Arab Emirates, Saudi Arabia, England and Singapore.

An installation artist and silk-screen painter, Al-Mansour creates artworks of women in Islam, the Islamic religion and pre-Islamic goddesses.

“I’m a very spiritual person because I grew up in Saudi Arabia and with a lot of religion around me,” said Al-Mansour, who is Muslim and is married to David Penchansky, a Christian theology professor at the University of St. Thomas. “So, I like to talk about the Islamic religion, pre-Islamic history, women’s rights and equality through my art.”

Al-Mansour added that she hopes her artwork will inform people in the West that women in Islam have a powerful voice.

“I want to bring the Arab art voice into the contemporary world of art in the West to show that we have a different voice, which is beautiful and unique,” she said. “We don’t have to mimic or do exactly what Western artists do in order for us to have art.”

Al-Mansour both creates her own art and collaborates with other artists, and recently worked with Michal Sagar in creating “Shadow Sisters.” Al-Mansour’s website gives this description of “Shadow Sisters,” the tools used to create it and the message it tries to convey: 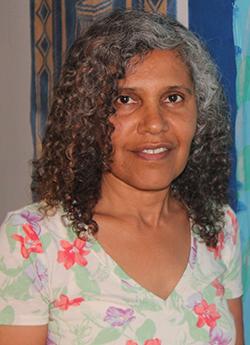 Viewers enter a passage of glassine paper painted with henna, a labyrinth leading to an enclosed space, a sand strewn cave-like inner sanctum. Hend Al-Mansour and Michal Sagar remain open to the unexpected, move beyond their separate paths and collaborate to produce one body of work. From two peoples with a heritage of conflict, Arab and Jewish, the artists go beneath the surface to explore the idea of shared ancestry.

Sagar is the visual arts department head at Breck School in Minneapolis. Like Al-Mansour, Sagar’s artworks have been exhibited nationally and internationally. The two have worked together for several years on various art projects.

“I asked Hend if she would be interested in working collaboratively with me to explore creatively an installation that other people could participate in,” Saga said. “We would go back in a very ancient time as artists, maybe before when we were still related more closely and less in conflict.” 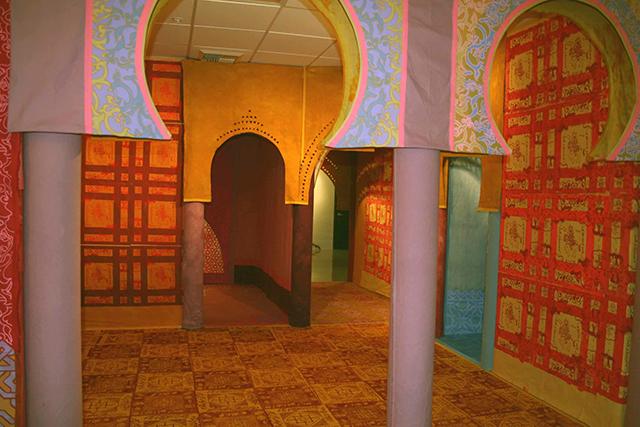 (Courtesy of Hend Al-Mansour) Hend Al-Mansour: “I want to bring the Arab art voice into the contemporary world of art in the west to show that we have a different voice, which is beautiful and unique.”

Such artwork and collaboration could help bridge the gap between Muslim and Jewish communities, Al-Mansour said. Despite the prolonged conflicts between Israel and Palestine, the two communities have more things in common than there are differences, she added.

In collaboration with Leili Tajadod-Pritschet, an Iranian artist, Al-Mansour has created another piece of art: “Great Mother of Islam,” an installation piece, which will be on display in November at the gallery of the College of St. Catherine in St. Paul.

Al-Mansour has recently become part of The Lahd Gallery, a London-based e-commerce gallery, which houses some of her art.

Al-Mansour, who was born and raised in Hofuf, Saudi Arabia, and lived in segregated communities where men and women were not allowed to mix. Her hometown didn’t have a high school for girls, so she moved to another city in search of education.

After graduating from high school, Al-Mansour went to Egypt for medical school because her country didn’t offer medical training for women.

“The government of Saudi considers women as second-class citizens,” she said. “If you’re a woman, you feel like you’ve less brain and you’re less valued than a man.”

Driving a car when she wanted, dating who she wanted and dressing how she wanted were among the experiences Al-Mansour yearned for during the first 40 years of her life in Saudi Arabia. 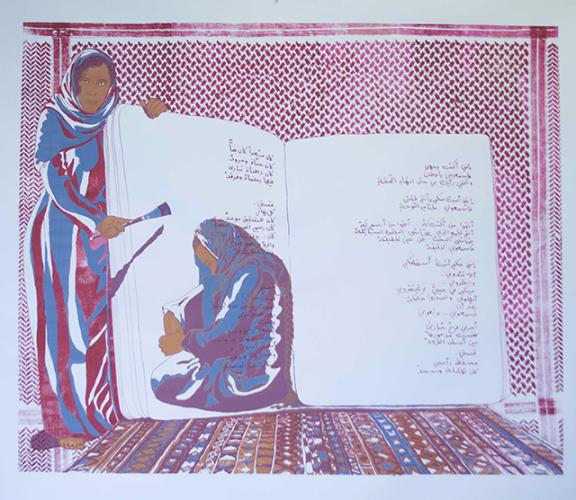 (Courtesy of Hend Al-Mansour) An installation artist and silkscreen painter, Al-Mansour creates artworks of women in Islam, the Islamic religion and pre-Islamic goddesses.

After earning her medical degree from Cairo University in 1981, she returned home where she worked as a doctor for nearly two decades.

Even as a doctor at King Faisal Specialist Hospital and Research Centre, Al-Mansour wasn’t allowed to drive, rent an apartment or run a business without the consent of a male relative, known as “mahram.”

Saudi Arabia remains one of the world’s most restrictive countries for women, and is among the few — perhaps the only — country in the world where women are not allowed to drive. It’s also considered illegal for women to work or travel abroad without a mahram: husband, father, brother or son.

“I thought I had enough of Saudi Arabia. I didn’t think I should stay there anymore,” she added. “I gave it a chance, but I eventually thought I should go somewhere else.”

Al-Mansour received a two-year fellowship at the Mayo Clinic in Rochester, Minn., in 1997 at the age 40. But less than a year into her fellowship, Al-Mansour was diagnosed with breast cancer. With each tick of the clock, Al-Mansour came to realize that time is precious — so she sought refuge in art to cope with the illness.

Al-Mansour left medicine behind. “It was taking up all my time,” she said of her work as a doctor. “And I loved to do art. I felt there were a lot of things I wanted to say and express through art.”

After about a year of extensive treatment, Al-Mansour was pronounced cancer-free. In 2000, Al-Mansour enrolled at Minneapolis College of Art and Design, where she earned her master of fine arts degree two years later.

That same year Al-Mansour married Penchansky, and the couple now lives in their St. Paul home, where Al-Mansour perfects her craft in a basement studio.

Al-Mansour said she hopes her work will leave an enduring stamp on the art world as well as on the political and social philosophy toward women in the Middle East.

“I don’t want to only show the oppression of women, I also want to show how women have power that’s inherent to them,” she said. “I want to show the beauty of power and to encourage them to seek their rights.”