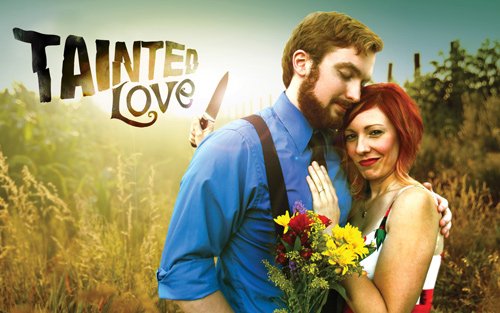 CAVEAT: Courtney McLean (the storyteller) is a founding member of the Rockstar Storytellers, and I have worked *extensively* with her over the years.

SHOW TITLE: Tainted Love
PRODUCER: Erin Sheppard Presents
HAILING FROM: Minnesota
SHOW DESCRIPTION: From sirens of the sea, to toys that are tired of being played with, find out just how horrifying love can be. From the group that created last year’s Bump in the Night, Tainted Love uses cheeky story-telling and lively dance to delve into the horror that love can bring. Can you love yourself too much? Love of technology is a good thing, right? One thing is for certain, sometimes love can kill you.

Actually, that caveat at the top of the post may be insufficient — enough so that if I wasn’t determined to review every show in the Festival, I might recuse myself from this one. I very much believe every member of the Rockstars to be an excellent writer/performer (they wouldn’t be in the group otherwise), but we get some pretty intense exposure to each other’s work — it’s one thing to see a storyteller once a year, quite another to see them month after month at various events for years on end. It’s impossible not to develop a hypersensitivity to each other’s performance tics and structural devices. I just don’t know that I can fairly speak to how her stories play to someone without that degree of familiarity. (I will observe that the Courtney onstage for this show is probably the one less-well known to her followers, but it is my personal favorite Courtney: a little bit darker, a little more expressionistic, a little more imaginative.)

I have not, however, seen Erin Sheppard’s company at work before, and was pleased with what I saw — they’re consistently playful and energetic, throwing up big sloppy fun with wild abandon, and there’s a real lightness of touch even in the more macabre pieces. Tonally, they would seem to be well-matched to Courtney’s style. And I love variety shows. So why was I having trouble with the transition from one to the other?

Perhaps partly because Courtney’s material here is uncharacteristically dense, which I applaud — but I often found myself zoning out sequences in both halves, because I was working to readjust. Oddly, I found myself thinking that I might enjoy the two shows more in isolation from each other — I’d gleefully take an hour of dark storytelling from Courtney, or an hour of high-energy dancing from the company, but I found that they didn’t complement each other well for me. An oddly lukewarm conclusion, regarding a show with so many pieces in it that I enjoyed, but my overall impression was one of tonal whiplash.