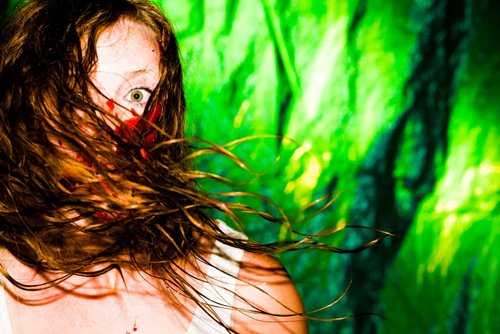 SHOW TITLE: Hear No Evil
PRODUCER: RawRedMeat Productions
HAILING FROM: Minnesota
SHOW DESCRIPTION: Seven women work here.
Do not ask what they do,
Nor why they do it.
Their business is blood,
And no one can stop its flowing.

BLOOD: 5/5 (Wow, they are not kidding)
AGES: 16+
PRE-CRINGE PROFILE: I first was introduced to horror theater when I learned about the Theatre du Grand Guignol in Paris- the self-proclaimed “Theater of Fear and Terror”.

For me, one of the key scenes in Bram Stoker’s Dracula takes place about halfway through the novel. Up until that point, the title character has been a completely mysterious, almost omnipotent figure — he can crawl down walls, hypnotize, fly, command animals and storms, seemingly appear and disappear at will. He’s terrifying because he’s demonic, incomprehensible — and the central characters are entirely at his mercy.

Then there’s the scene in which, finally, Van Helsing sits down with all of those characters and exhaustively briefs them about what Dracula is, his history, his limitations and vulnerabilities. That is exactly the point that the tale stops being horror and becomes a more conventional adventure story.

This is a very, very tricky tightrope for a more expressionistic horror piece to walk. Explain too much, and you rob it of all of its mystery and power — explain too little, and what you’re watching is random chaos. This is complicated by the fact that different audience members have widely varying expectations. What I’m saying is that, for the single data point that is me, this show walked that tightrope very, very well.

I was never given great detail, but I was given exactly as much information as I needed to follow what was going on. I knew that there was a group of women, and that they had a very dangerous, unsettling job. I knew that “the night shift” was something that they had a genuine, mortal terror of. I knew that when the lights shifted, no actress on the stage gave me a false moment: they became tense and alert, shifted together for safety, and I was concerned for them. I knew that if one of them removed her ear protection when that was happening, the results were really, really fucking bad. I didn’t need more detail than that.

Likewise, the company seemed to be in clear control of what I didn’t know. One of the women obsessively recited Catholic prayers — but I had no idea if, in this world, those softly spoken magic spells had power, or were merely an empty compulsion.

This kind of thing has to be driven — almost entirely — by physical cues from the company. I’ve seen magicians pull scarves out of their mouths before, but when I see a weak and frightened woman pulling a thread from her throat — gagging as it catches — watching her shaking hands and barely repressed nausea — I know that it means something. To be clear — what makes this work is not that I know what it means, but that I never doubted that they did.

I personally found the final (oddly Catholic) explanation to be a masterstroke — it wasn’t a pat explanation that diminished the torment of the individual characters, but told me enough about who they were and why this was happening to them — that it clarified that what we were witnessing was as much a moral torment as a physical one.

(I should clarify that I don’t think everyone in the audience was on the same page as me. There was definitely some chuckling in the moments that I was watching tense, breathless. It’s a show that shows us some very strange images, and I can easily see how they could be comical to someone who hasn’t, say, wasted a lifetime of obsession on this kind of thematic material.)

The first two shows I saw were excellent — cleverly conceived and skilfully executed — and I wouldn’t hesitate to invite just about anyone I know to them. I can’t think of many people I would cheerfully recommend this one to. If I’ve been at all coy about this, let me be perfectly clear and state that this is one of my favorite things I’ve seen on a stage in a damn long while. It made me intensely jealous of the work they get to do — of the work they apparently still have the moral courage to do. In a little way and for a little while, it made me fall in love again with the unique feats that our medium alone is capable of.