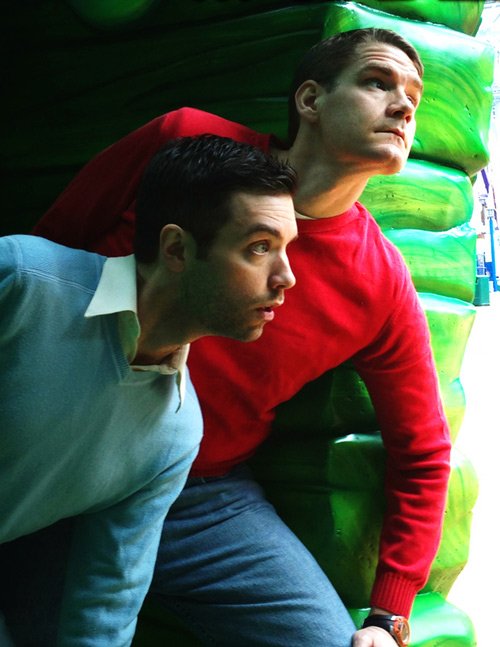 CAVEAT: I have worked with several of the cast on a handful of small projects through the years.

SHOW TITLE: The Harty Boys in the Mystery of the Mall of America… of Death!
PRODUCER: Comedy Suitcase
HAILING FROM: Minnesota
SHOW DESCRIPTION: Join sibling detectives Fred and Jack Harty as they match wits with their newest enemy; Chuckles the Undead Clown! “The brilliant comedic minds of Comedy Suitcase” (Star Tribune) blend local humor, social satire and sharp physical comedy to create a Halloween show for the whole family!

Y’know, I can’t make any pretense of objectivity here — I am just totally susceptible to Josh and Levi’s schtick as the Harty Boys. They’ve solved The Case of the Limping Platypus, joined the august ranks of those who have Saved Christmas — even sent up Sherlock Holmes — and that dopey, wide-eyed, unquenchable optimism reduces me to helpless schoolboy giggling every time.

(This is trickier than it looks, particularly since they manage to keep the characters both totally sincere — sustaining their charm — while constantly poking holes in just how weird and dysfunctional their relationship is. On a related note, I find casually oblivious, old-timey racism to be freaking *hilarious*.)

I’ll confess I wasn’t sure exactly how you go about doing an all-ages show in a horror festival, but they seem to have aimed tonally for a superior episode of Scooby-Doo — i.e. it’s basically a farce with some vaguely spooky tropes in the background. But with kind of a self-referential [adult swim] sensibility. But without any uncomfortable conversations you’d have to have with your kids afterwards.

(Well, maybe one, if you’ve got a child precocious enough to ask uncomfortable questions about Hooters.)

Strong as the two leads are, this is a live-action cartoon, and it wouldn’t work if everyone involved didn’t get that schtick. Fortunately, they do and it does. (Though I’ll confess that my greatest pleasure comes from the surprisingly poetic turns of comic phrase that show up regularly.)

Watching the consistently polished and inventive stuff that Comedy Suitcase turns out makes me dismayed that I don’t have kids of my own to bring to their shows. Along those lines, I was also dismayed at the relatively small, childless audience that turned out for their opening — it’s a hugely energetic show, one that really demands a large crowd giving back a strong collective response. Here’s hoping it’s a symptom of timing (early on a Thursday night) and that the audience they deserve is to come.