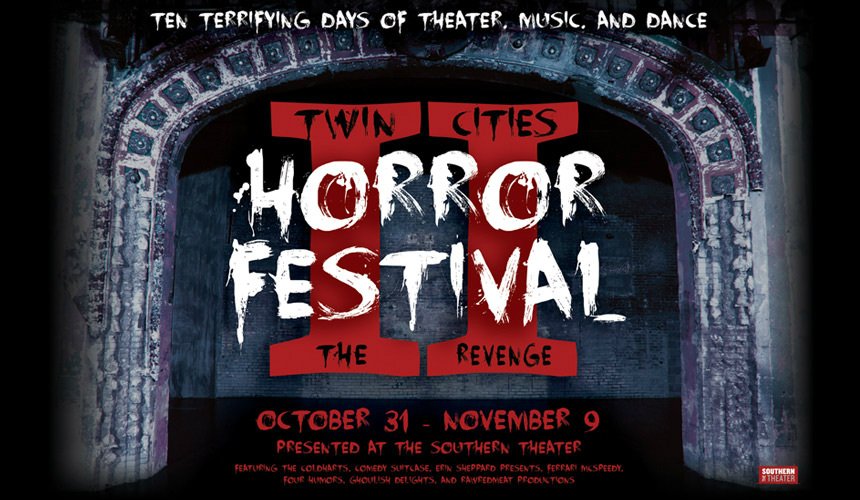 So, to my eternal (and by “eternal” I mean the exact opposite of that thing) chagrin, I managed to completely miss the first Twin Cities Horror Festival. My parenthetical is due to the fortunate fact that it survived and crawled its way into another year. I don’t plan to be so remiss again.

I’m particularly shamefaced because of my deep interest in the subject — I’m a horror writer myself, one who’s spilled some ink (and other fluids) on the nature of the medium. I’ve spent my fair share of time fumbling after ways to induce shock, nausea, and unease in an audience, and consequently have a very real, very technical interest in seeing how these six excellent companies (and they are all excellent — there’s not an obvious weak link in the clanking chain) tackle the same challenge.

(Astute readers will note that I said “six”, when there are seven companies in the Festival. Professional ethics dictate that I mention I have a small role in Trust and Obey, which I will of course not be covering in this space. I’m not aware of the various shows being in any kind of meaningful competition, but in the interests of full disclosure…)

Oh, but that’s insufficient, surely — surely insufficient for explaining why we devote so much time and energy and money to culturally agreed-upon perversion. And I suspect that both entertainment and criticism (at their best, natch) have less to do with tracking collective approval than they do with enriching our inner lives. Horror’s a lot like comedy, after all — they both revolve around provoking a visceral, physiological response. There’s no denying that fear can be physically pleasurable: the jolt of adrenalin, the contextually safe triggering of the fight-or-flight instinct…

But I Think It Goes Deeper Than That (TM). The horror that I find myself continually coming back to almost all has a deep moral dimension, as well, and that’s another respect in which it resembles comedy: both are mediums that present themselves as subversive forces but are suspiciously traditional. Horror is often stubbornly conservative: in an age of fashionable moral relativism, it’s one of the few straggling modern genres that maintains a keen consciousness of capital-e-Evil — both the ways that we make ourselves vulnerable to it and, occasionally, the ways that we can meaningfully resist it.

Not that I have any expectation that these shows are going to cater to my own specific tastes and prejudices, of course — I’ll cheerfully enjoy the milk of skillfully-executed entertainment, whether there’s much in the way of quivering meat for my pompous analysis or not. I love the genre and I love the companies. Strap in, folks: we’re goin’ for a ride.