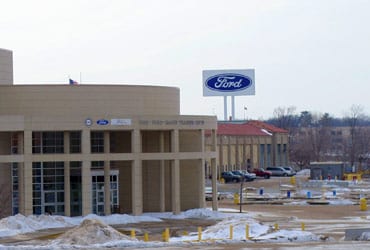 Around the end of the 1920s, my late father-in-law, Clayton Basye, joined a crew of farmhands trucked to St. Paul to pick up Model A’s at the Ford plant and drive them to a St. Peter, Minn., dealership. When he got back, Clayton told me years later, the dealer refused delivery and said: “That car’s for you. You can pay me when your crops come in.”

Just short of a century of car and truck building in the Twin Cities, Ford Motor Company is expected to shut down manufacturing forever at its St. Paul assembly plant in December. This will mark the end of a rich and varied era in which the company left a strong imprint on Minnesota’s economy, culture and transportation system. In a three-part series beginning today, Minnesota 2020 examines Ford’s history in our state, the current state of the Twin Cities Assembly Plant and its shrinking workforce. We’ll also look at prospects for redeveloping its 148-acre site overlooking the Mississippi River and the Ford lock and dam in St. Paul.﻿

Clayton drove nothing but Fords for the rest of his life, more than 50 years of devotion to the brand Henry Ford established. Along the way, Ford’s presence in Minnesota impacted not only manufacturing and transportation, but also housing, energy generation, consumer credit and buying power, worker training and the labor movement. It’s a story of triumph and decline as Minnesota adapts to post-industrial 21st century America.

“The Ford plant didn’t make us Detroit, but it’s been an important part of the social and economic culture of the Twin Cities,” said labor historian Hy Berman. “Ford was one of the first major corporations in Minnesota employing 20th century technology. Before that, it was mostly grain milling and lumber.”

The firm’s Minnesota ties began in 1912 with 100 workers building Model T’s with hand tools in a downtown Minneapolis warehouse. A year later, it broke ground for a 10-story factory next to the current site of Target Field in Minneapolis and a three-story plant near the State Capitol in St. Paul.

By the 1920s, Ford’s technical and economic innovations had built a business far too big to be supplied by those scattered facilities. Construction of the sprawling current plant started in 1923; in 1925 the first Model T flivvers and Model TT light trucks rolled off the 8.4-mile-long assembly line.

They would be followed by more than 7 million vehicles in all, 45 different models, including Phaetons, Sportsmans, Crown Victorias, Fairlanes, Country Squire wagons, Galaxys, LTDs, Mazda B-Series pickup trucks and, since 1992, Ranger compact pickups. The plant still churns out 500 Rangers in a good 10-hour day — one every 57 seconds — said United Auto Workers Local 879 President Paul Shropa. The Ranger, although considered dated by industry standards, has been given top ratings for assembly efficiency and vehicle quality in national surveys, and its sales have shown a recent uptick.

Still, Shropa said, “Our last date of scheduled production is Dec. 22.” Ford, which first announced its intention to close the plant in 2006, has extended its life past earlier projected shutdown dates in 2008 and 2009. It now says only that operations will end sometime this year. The company plans to build redesigned Rangers at plants in South America, Asia and Australia and sell them only in international markets.

Thus will end Ford’s mixed manufacturing legacy in Minnesota, leaving behind a workforce of about 900 as well as employees of at least 17 supplier businesses who have been declared eligible for the state’s Dislocated Worker program. Pre-shutdown plant layoffs began with elimination of a second shift in January 2007, cutting the staff nearly in half. Under a two-tier wage system implemented in recent years, most of the remaining workers receive less pay and fewer benefits than the 120 or so with long seniority, Shropa said.

That represents a reversal of one of Henry Ford’s most successful innovations, the $5-a-day minimum wage that doubled prevailing rates for unskilled labor when he introduced it in 1914. Ford intuited that the burgeoning productivity of his assembly lines needed to be matched by workers with enough income to buy the cars pouring out of his plants.

This then-new idea of mass production linked to mass marketing was one of the tenets of what became known as “Fordism,” a form of corporate paternalism with downsides in virulent anti-unionism and other efforts to dictate the habits and associations of Ford workers.

“Ford even had a Sociological Department that visited workers’ homes to check for tobacco, alcohol or socialist newspapers,” said Macalester College historian Peter Rachleff. “If you didn’t pass muster, you were out of a job.”

Meanwhile, the hundreds of new jobs at the plant created a housing shortage in surrounding neighborhoods. The solution was New Ford Town, an early suburban development in Richfield accessible to the plant via the new Ford Bridge across the Mississippi. In recent times, the former company town was leveled for runway expansion at Minneapolis-St. Paul International Airport.

Along with the factory, Ford built a hydroelectric plant at the bottom of the Mississippi bluff that powered the assembly line with juice left over for up to 75,000 homes. Ford unloaded it in 2008 to Brookfield Power of Canada, which sells electricity to Xcel Energy. A railroad spur and freight yard now owned by Canadian Pacific still bring parts and finished vehicles into and out of the plant. For years, Ford mined silica sand in vast tunnels beneath the plant to produce 40,000 square feet of vehicle glass a day.

The Great Depression forced shutdown of the plant for two years, resuming with new UAW efforts to organize the workforce. The union finally succeeded in 1942, when collective bargaining became a requisite for Ford to win government contracts to build World War II armored cars and aircraft engine components. Consumer production restarted in 1945.

Over time, the plant grew to more than 2.1 million square feet of indoor space, including additions to the main factory in the 1960s and ’70s, a paint building in 1985 and a 1999 technical training center that operates in a partnership with state colleges and universities. While state and St. Paul officials have conducted extensive reuse studies for the site and buildings, no plan has been adopted in advance of environmental assessments and Ford’s selection of a buyer for the property.

“This is the end of the industrial era for this area,” Berman said. “But it could become a beautiful residential area.”

Next Tuesday look for Part 2: Life and work in the Ford plant’s final days