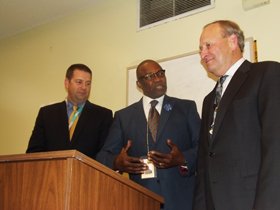 In an effort to better care for those suffering from drug and alcohol addiction, North Memorial Health Care and Turning Point have partnered to provide care for those in north Minneapolis.

With emergency room wait times up to two hours at North Memorial – attributed to the high number overdoses and those in need of detoxification – officials with the hospital said they needed to look into other ways to care for all in need. To that end, now many of those needing treatment for their addictions will be cared for at Turning Point, 1500 Golden Valley Rd.

“The reason people couldn’t be seen (at North Memorial) is because half the beds were filled with people who were intoxicated or who had drug problems,” said Larry Taylor, CEO of North Memorial Health Care. “Not only was there the problem of getting them detoxed, but many had no place to go; we couldn’t just send them out like that. This partnership is a great opportunity to correct that.”

“With chemical dependency and with the homeless we have not had the best results,” said Wicklander. “We’ve recognized we can do better, so we’re excited to partner with Turning Point.”

Turning Point is a large, multi-bed treatment facility founded in 1976 to treat those suffering from drug and alcohol dependency. The center has been heralded for its success rate of getting people to turn away from their addictions using what it calls culturally specific methods to cure abuse and addiction.

The partnership, along with routing certain chemically dependent patients to Turning Point, will have a paramedic team on site two days out of the week.

Over the past few years, chemical dependency has taken its toll on Minneapolis. According to Hennepin County Sheriff Richard Stanek, heroine alone is killing people at unheard of numbers.

“Five years ago there were six heroine deaths (in the county) … last year there were 56 overdose deaths due to heroine and this year there have been 42 heroine-related deaths,” said Stanek.

The partnership between a for profit hospital and a not-for-profit treatment facility is pretty unique, as noted by Turning Point board member, Ray Richardson.

“It’s hard to get big business and the community to get together, but when it happens it’s a beautiful thing,” said Richardson.

According to Turning Point founder and president, Peter Hayden, last year his facility, which treats primarily African-Americans, helped more than 450 people get on the path to recovery. Hayden said 63 percent of those Turning Point treated were homeless. Of that, he said Turning Point was able to get 39 percent of them into permanent housing. In addition to treating addiction, Turning Point seeks to find employment for those it treats – another key to keeping people from abusing drugs or alcohol.