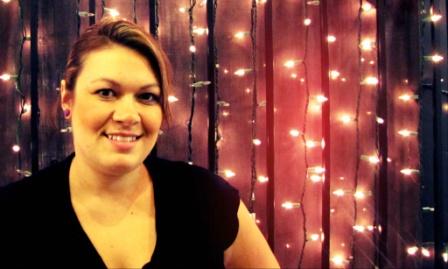 Fresco comes from the Italian word for fresh.  Renaissance artists once painted picturesque visions in plaster so fresh it was still wet.  The paintings, called frescos, lasted from generation to generation.  That sense of enduring vision is exactly what you encounter after a few short minutes of listening to Danielle Gooderum talk about the start of Fresco’s Pasta Bar at NDC’s flagship Midtown Global Market.

Dani started cooking when she was a little girl. Her first Christmas picture, taken before she was even five years old captures her spark.  In it she stands in front of a brightly colored eighties kitchenette, surrounded by utensils, rubbing her hands together and ready to cook.

“I grew up in the kitchen with my mother and my grandmother- Three generations.  We had huge holiday parties.  Fifty or sixty people would come for Thanksgiving and Christmas.  We’d all cook together so I learned how to cook for huge groups at a very young age.”

Dani’s childhood was full of happy memories of cooking with her mother and grandmother.  Then, at eighteen, tragedy struck.  Dani’s mother was killed in a car accident.  Just six months later, still grieving for the loss of her mother, Dani lost her grandmother to cancer, “I think my connection to cooking has always been through them; it always makes me feel closer to them even though they’re gone.”

Dani’s dream has always been to open her own restaurant on a lake.  After years of working for others, doing everything from bar tending to dishwashing, she decided it was time to step out on her own.  Seven years ago, drawing from her experiences growing up, she opened Catering by Dani.  In the beginning, she juggled a part-time job with part time catering but as her clientele grew, Dani was able to move to catering full time.

Last November, Dani decided to take the next step.  “We did a ton of research and the best opportunity was here at the Market and with NDC.  They gave the most help.”  Fresco’s Pasta Bar took over a vacant stall in Midtown Global Market that had never been a restaurant before.  The opportunity was perfect because Dani was able to rent space from Kitchen in the Market and minimize the costs of renovating.  She came to NDC for a loan to purchase the hot well and fridges she needed to start and Midtown Global Market lent her a deli case.  Between her two businesses, Dani now has two full time employees and up to forty part time employees based on different catering jobs.  Profits at Fresco’s Pasta Bar are increasing and Dani continues to cater full time on the weekend.

They say it takes a village to raise a child, but the same could be said of starting a business, “We would not be here if it were not for the support of our friends, our family, the Market, and NDC.  Everybody plays a role and a part in our success.”  It is with that mentality of gratitude that Dani continues to give back to the community.  Each Wednesday, no matter how busy the week has been, she puts on a Goodwill dinner for 250 people.  What comes next for Dani?  Expecting a new baby this fall, she is looking forward to passing family traditions on to the new generation.