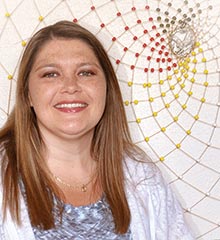 Women chair four of the 11 federally recognized Indian tribes in Minnesota. Carri Jones, chairwoman of the Leech Lake Band of Ojibwe, is one of them.

In July 2012, Jones, then 32, became both the youngest person and the first woman in her tribe to be elected to this position. “It’s a real honor stepping in as a woman,” Jones said, noting that “the majority of the council was and is dominated by men.”

She continued: “It shows women, especially younger women, that they can be successful if they put their mind into it and work hard.”

Jones has been working hard for the tribe ever since she graduated from Bemidji State University in 2003 with degrees in accounting and business administration. She started as a file clerk in the band’s finance department and worked her way up to the controller position. Then, in 2010, Jones made a foray into tribal politics by entering the race for secretary/treasurer.

After coming in third, Jones said she was disappointed at first. Then, she added, “After I woke up the next day, I thought … ‘There is nothing I should be ashamed of. I worked really hard and I did my best.'”

Although she admitted to feeling “gun shy” after losing her first race, support from many community elders persuaded Jones to run for chair. She said she knew it would be a tight race; the incumbent had held the position for 10 years. Although Jones didn’t expect to win, she did – by just five votes. A recount was requested, one that actually awarded Jones additional votes, and she began her four-year term.

“It felt like a huge weight was lifted and the tears of joy and relief just started to pour out,” Jones recalled. Also, she said, “From these two experiences I felt like I have learned not to take anything for granted, that no matter what, keep working hard and things will pay off in the end.”

As chairwoman, Jones is one of five committee members who oversee tribal government operations, housing, health care services, education and casinos, as well as manage reservation land in the Chippewa National Forest.

From her work in accounting, “I had seen a lot of things that we could be doing,” Jones recalled. “I just took it from there, wanting to make an impact on our reservation and trying to make it a better place. … I wanted to make good decisions with our resources and lead us down a good pathway.”

A good pathway isn’t always easy to come by, however. “Once you step in, you notice how overwhelming everything is,” Jones said. She relies on collaboration for guidance, especially from community elders and the other women tribal chairs across Minnesota.

“I actually seek out and ask for their advice,” she said. “I’ve always felt like that was the best thing – to seek other people’s advice and just learn from them.”

While Jones has appreciated the learning experiences offered by her position, not everybody is positive about her role in tribal government. “You’re always going to have critics out there … knowing you’re not going to please everyone no matter what decision you make,” Jones said. “It was hard to get that at first, but I’m getting used to it.”

Another collaborative effort of Jones’ is among youth. Each summer she chooses two high school students to serve as interns. For six weeks they attend lobbying sessions in both the state and U.S. Capitols, and in return they receive credits at the tribal college. This encourages them to enroll right after graduation, Jones said. “I’ve seen a lot of younger people stepping up into positions and actually being active in our election process and starting to be more engaged with it,” she said.

Jones also connects with younger children on the reservation by visiting them at school and community events. “I show them the importance of education, and build their self-esteem and self-confidence by showing them they are leaders where they’re at.”

Not all of her visits are work-related, however. Jones is the single mother of two children, ages 7 and 4. “They keep me pretty active,” she admitted. Her mother and two sisters help provide care for Brayden and Isabella when Jones needs to travel, and her workplace is built upon a supportive principal, she said: “Make sure you attend to your children first, and then we’ll do business.”

Although Jones is only halfway through her term as chairwoman, she expects she will run again. In the meantime, she will start graduate school in the fall, this time at the College of St. Scholastica in Duluth, where she will pursue a master’s degree in health care administration.

No doubt that will be a busy time for Jones – a time when she would do well to heed the advice she gives to other women considering politics.

“Don’t let the negativity bring you down. Always focus on something positive,” Jones said. “Keep pursuing dreams and goals and never give up on any of it. … Even though things get hard, in the end it usually works itself out, and usually for the better.”

“And never be afraid to ask for help with any of it.”