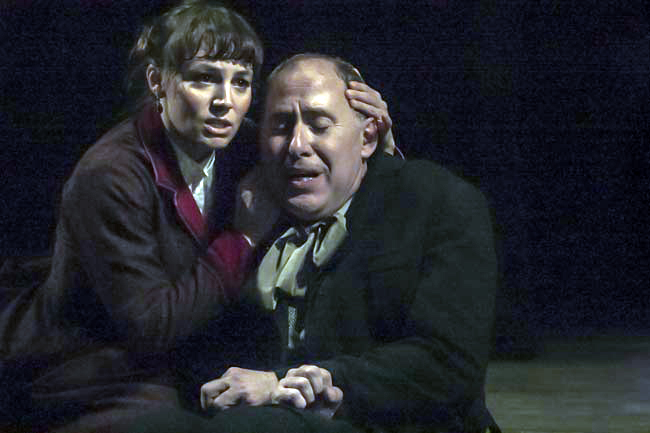 There are few things better than seeing a performance that does justice to a favorite book, and few things worse than having it fall short. So it was with intrepid anticipation that I went to see Jeffery Hatcher’s version of Henry James’s novella Turn of the Screw currently being presented by Torch Theater Company at the Minneapolis Theatre Garage. From the first moment, in the language of the show, it seduced me.

The script is sharp and quick, and it leaves room for the audience to bring their imagination and past experience with the story to the performance. The actors are amazing. Lindsay Marcy plays the governess hired to look after two recently orphaned children and manage the secluded country house for their uncle, under the condition that she never contact him. Craig Johnson plays everyone else: the uncle, the boy, the housekeeper, the ghost of the sadistic valet, Peter Quint, and in a shadowy way the ghost of the original governess who drowned herself after a sordid affair with Quint leaves her pregnant.

The play unfolds as an intense first-person account punctuated with vignettes of interaction between the characters. Hatcher maintains much of the language from the original work; it carries the weight of the 19th century Essex country house and the intimacy of the first personal narrative. Marcy leads the audience through the experience with masterful storytelling. Johnson brings the story to life with his facial expressions and physicality. One cold look from Johnson can leave you looking for a Bible or other talisman! He moves seamlessly from 10-year-old boy to aging housekeeper, Mrs. Grose. Despite no costume change for characters, there is never an unintended ambiguity about which character stands before us.

That of course isn’t to say there’s no uncertainty in the show. More than in the original work—or what I remember of reading it 20 years ago—surfaces a theme of reality versus imagination. Are the children haunted by the ghosts? What does the governess see? Is it her own imagination? On one level, Turn of the Screw is an old school ghost story, similar to anything written by Bram Stoker about what takes places in lonely dark places with sad histories where ghostly antagonists try to keep a foot in the mortal world by grabbing the soul of a child. On another level, the story is a psychological thriller about serious depravity and loss of innocence. I’m not even sure if the innocence lost belonged to the children, the new governess, the old governess—but it’s definitely gone by the end of the story!

Director David Mann and his team are to be commended; the costumes and set perfectly complement the tone and opportunities for imagination seen in the rest of the show. The characters are in almost continual motion which stirs up the excitement and makes more poignant the times when physical action stops and plot leaps forward.

If you’re looking for something creepy to do for the Halloween season, Turn of the Screw is definitely worth checking out. Maybe I wouldn’t take a first date. And if I had to do it again, maybe I wouldn’t go with my parents either. We all agreed the show was great—but no post-performance discussion on the depths of degeneracy presented.