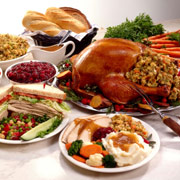 When heading out to grocery stores, butcher shops and bakeries this week in preparation for Thanksgiving, be thankful we’ve adapted our national day of thanks’ menus to use abundant and relatively inexpensive Minnesota-produced food products.

Records are incomplete on what the Pilgrims and the Wampanoag ate at their first three-day celebration in Plymouth Colony in 1621. What is known is that staples of the modern Thanksgiving feasts – including potatoes and sweet potatoes – had not been imported and introduced to North America by then, and historical researchers suspect that there were far more oysters, mussels, other seafood, ducks, geese and wild animals served at those meals than wild turkeys.

Bringing that close to home, we assume most Minnesotans have adapted Thanksgiving menus that rely heavily on what our state’s 81,000 farmers produce and are supplied by more than 600 Minnesota food companies – including 13 industry giants with billions in annual revenue. This is good for the Minnesota economy.

Minnesota is the leading turkey producing state. The state’s 250 turkey farmers are expected to raise 47 million turkeys this year. University of Minnesota research in 2011 concluded that these birds created $807 million in economic activity and supported 26,000 Minnesota jobs.

On top of that, Willmar Poultry Co. at Willmar is the nation’s largest turkey hatchery. That clears up where turkeys come from if not which came first, the poult or the egg.

Let’s consider other local foods for the feast table.

Sweet corn, corn puddings or corn breads are likely to adorn tables. Keep in mind Minnesota is the leading state in growing sweet corn for processing with 119,000 acres devoted to the crop. The Minnesota office of the National Agricultural Statistics Service (NASS) tallied the farm value of that crop at $77.7 million in its most recent annual statistics report, and that doesn’t multiply the benefits and values added off the farms.

Minnesota also ranks first among states in producing green peas for processing, so put some peas on the table. NASS found 53,300 acres planted in peas, with a farm value of $39.1 million.

Bean dishes work as a great high-protein substitute for meat for the relatives who limit their range of center-of-the-plate foods. Minnesota farmers rank fourth in the nation in producing dry edible beans of numerous types, from 175,000 acres at a farm value of $85.7 million.

You will need breads and stuffing that are largely built up from wheat crops. Minnesota farmers rank 10th among wheat producers with more than 1.1 million acres planted with wheat crops that were valued at $540.2 million in the last NASS annual survey.

Side dishes will require potatoes along with other traditional tuber crops and squashes. Minnesota isn’t big in producing some of these crops except in local markets so not much data are available. Potatoes, however, are grown on 42,000 acres and were valued at $114.8 million, making Minnesota the seventh largest potato state.

Then there are ingredients needed for baking and basting. Minnesota farmers lead the nation in sugarbeet production with a farm crop value of $529.9 million in the last year for which data are complete; they rank sixth in dairy production, valued at approximately $1.5 billion at the farm gate; our poultry farmers produce $167.9 million worth of eggs, and the state’s beekeepers rank sixth in the nation producing a $12.8 million honey crop.

Most Minnesota grown pumpkins are decorative while pumpkins processed for making pies usually start on farms in Illinois and Michigan. We do contribute to making apple pies and apples for Thanksgiving Day snacking, however. Our orchard operators don’t crack the nation’s Top 10 list in apple production, but the value of commercial apples is pegged at $12.6 million.

Such Minnesota-grown foods for Thanksgiving would make the Pilgrims as envious today as they were thankful in 1621. But two side dishes are still needed to make a proper Minnesota feast meal, insists St. Paul business executive Al Paulson.

“It wouldn’t be complete without Minnesota wild rice,” said Paulson, whose family blends Ojibwe and Scandinavian food favorites. The other staple is cranberries that bring both a tingly taste and color to the table.

We’ll let Wisconsin and Massachusetts celebrate cranberries since they account for most production. Wild rice, however, is Minnesota’s official state grain. Data on this crop’s value are incomplete since Native Minnesotans harvest original wild rice in lakes and streams while farmers also raise cultivated wild rice on farms.

Spread wild rice with these other Minnesota foods on the feast table and the typical Minnesota family with be ready for the “four ‘F’s of Thanksgiving, insists Paulson. “That’s football, families, food, and more football.”