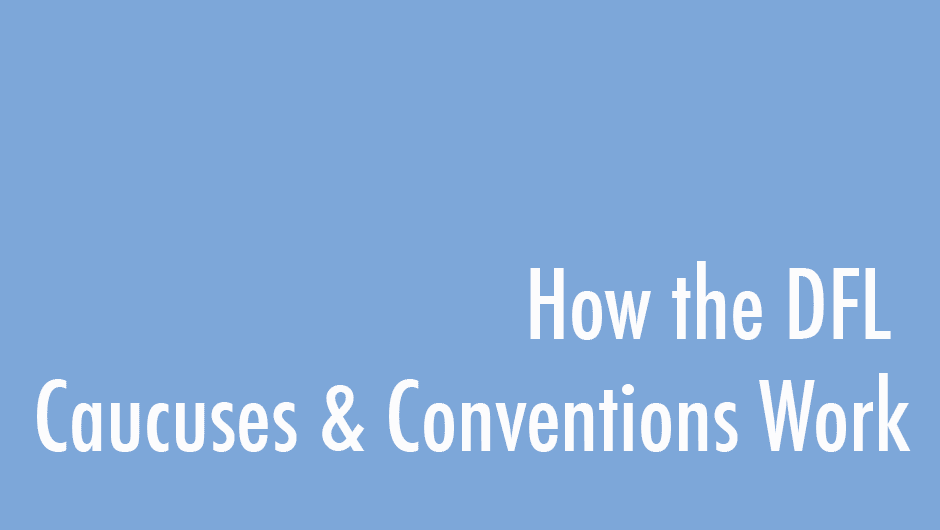 We’re fresh off of a municipal election that used ranked-choice voting to create a nearly endless ballot that nobody could comprehend. And our statewide elections use what I consider a far superior model: an incomprehensible process that begins way the hell in February that nobody cares about. Candidates can’t even officially file for another three months, and already we’re taking the first steps to decide who gets elected. And since we’re basically a one-party town, the DFL precinct caucuses are where the action is. So unless you want your next round of public officials chosen by a few dozen party activists, you better find your caucus now. Isn’t democracy great? USA! USA!

“…a way to meet your neighbors and talk about issues important to you. It’s also a gateway to getting involved in the political process; if you are interested in meeting your elected officials, learning how to make a difference in your community or perhaps exploring running for office, a precinct caucus is the place to start. People also attend precinct caucuses to support specific candidates or specific issues.”

Last year I wrote a tongue-in-cheek description of precinct caucuses, and although the particular statewide and county elections are different, the dynamic is the same. Instead of rehashing that, I am going to editorialize on the caucuses happening in February. (Although they’ve been held prior to Valentine’s Day in the past.)

Even when caucuses were held in March, that still seemed a bit far off to get the average person interested in grassroots politics. But we are over one hundred days from a candidate filing deadline. For north Minneapolitans, we’ll be voting for statewide offices, one of our two Minnesota senators, a county commissioner, and state representatives. Who, besides incumbents, has even openly declared? (With the exception of the open Secretary of State seat. And I’m just shooting in the dark here, but also Ole Savior.)

There are a few reasons why people participate in precinct caucuses. Party stalwarts or civics addicts (I fall into the latter category) attend most every year. People may be seeking a certain position within their party or an elected office (often overlapping with the party stalwart group). Voters unaffiliated with a candidate may attend in an attempt to further a pet issue of theirs–again, most of these folks are already party activists. Or caucus-goers participate in support of a particular candidate.

I was an alternate at the statewide convention years ago when Mike Hatch won the DFL endorsement for governor. That year, at least, there was heavy competition within the party for that seat. The process of choosing Hatch meant weighing such important factors as who would best represent the values and interests of the DFL, and who had the best chance to win in November? Also, Ole Savior was running. With such an early date for caucuses, I don’t see a fight for the soul of the party, nor do I see much of any competition for endorsement. Whether this is good or bad, it certainly limits motivation to participate.

By having our precinct caucuses a month earlier than usual, the ground floor of electoral political participation has been set at a time when mostly party stalwarts are the only ones paying attention. That group, unsurprisingly, skews towards older, richer, and whiter demographics. Plenty of party loyalists who are not active will stay home and wait to see who their party endorses. For me, I already know who I like and don’t like out of our slate of candidates. So that’s not the issue at hand. Competitive races can be among the biggest draws that bring new people into the political process. And for the time being, there isn’t much competition because few contests even have a second candidate vying for the support of their party.

So if there isn’t that burning question about who either best represents a party ideology or who stands the best chance of winning in November out of one’s own party, then that effectively limits most participation to the party stalwarts. Plenty of other people, even party loyalists, will just wait until the elections kick into a higher gear and then throw support behind their assigned candidate.

I sincerely love grassroots politics, and I’m looking for more diversity of candidates, participants, and ideas from our political system. Beginning November’s official electoral process in early February does not seem like it will bring us that.