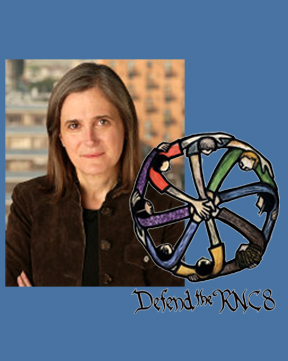 Labor Day week – September, 2008 – marked a shameful chapter in Minnesota and Twin Cities history. First, before the first gavel fell on the Republican National Convention at St. Paul’s Xcel Center – a political cocoon for visiting conventioneers and national media, Ramsey County Sheriff Bob Fletcher sought and received warrants from Ramsey District judges to launch raids on suspected disrupters of the RNC, arresting eight young self-described anti-authoritarian anarchists, members of the RNC Welcoming Committee. They had committed no crimes outright, but were accused of conspiracy to do so, based on the testimony of Fletcher’s hired undercover agents provocateur. As the eight sat stewing behind bars, St. Paul’s streets filled with demonstrating protestors, mostly older, gray-haired peaceniks while conventioneers, walled off by fences and 3,700 uniformed and undercover cops, conducted their business of nominating John McCain and Sarah Palin.

A few days into the mayhem that marked the week, and after cops maced and pepper-sprayed marchers and eventually arrested 802 almost entirely innocent civilians, Democracy NOW! journalists and producers Sharif Abdel Kouddous and Nicole Salazar were arrested with cameras in tow by Minneapolis cops assigned to the eastern sector of downtown St. Paul as they tried to cover events in the streets. When their executive producer, host Amy Goodman tried getting to the jail-trailer where the two were being held, she, too was arrested – all this despite carrying fully qualifying journalists’ credentials.

Two years later, the RNC8 are out, but still in the midst of their trials for conspiracy to riot. Terrorism charges have been dropped, much as almost all the charges of those arrested that week have been, either by the city for misdemeanors or by the county attorney for felonies. As pretrial hearings continue, some astonishing revelations have emerged from testimony delivered by those same undercover agents. And, now Amy Goodman and her crew have filed suit in Ramsey District Court, charging the cops, including the Ramsey County Sheriff, and administrations of both cities and unnamed members of the Secret Service they insist had a hand in their  arrests, which they consider illegal and unconstitutional since they were legally covering events as press. [Amy Goodman will deliver the closing plenary talk at the annual National Federation of Community Broadcasters conference in St. Paul Saturday, June 12, at 1:00PM, open to the public and proceeds of the $15 ticket go to KFAI Radio, the host station for this year’s NFCB gathering.]

TTT’s ANDY DRISCOLL talks with Amy Goodman about her suit and to preview some remarks she’ll deliver to the National Federation of Community Broadcasters (June 9-12) in St. Paul. Then, we talk with RNC member Garret Fitzgerald about the progress of the trials and other legal machinations still lingering from that infamous week in September, 2008.

Tune in. CAN’T GET US ON THE RADIO? Stream TTT LIVE at KFAI.org 11AM Wednesday June 2nd – or hear the podcast HERE after the show.

[Meanwhile, CivicMedia/MN Board Member and international legal activist Peter Erlinder sits in jail (or in an emergency room where he was twice taken earlier this month, possibly with blood pressure and heart problems). His daughter, Sarah, writes that strong and urgent action is needed from all of us. The US has, in fact called on Rwanda to free Erlinder, but more pressure is needed now that the Rwandan court has refused to release him even on humanitarian basis. The government contacts (including Hillary Clinton) she supplies here and in Rwanda are too numerous to list here, but they can be found HERE.]