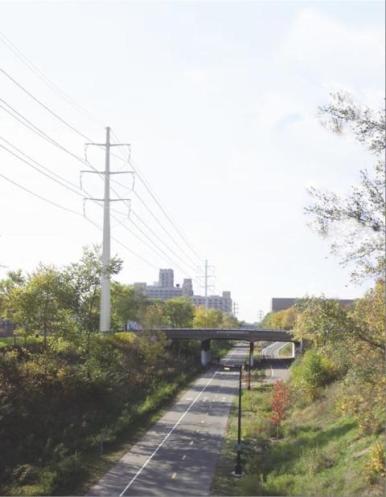 TTT revisits Xcel Energy’s Hiawatha Project continuing push to place electrical substations at Hiawatha Avenue and high-voltage lines over the Midtown Greenway. Despite reams of testimony and several “Friend of the Court” briefs being filed in what’s called a contested case, Xcel persists in its claim that additional capacity is needed in this area of the city. The guardians of that recessed corridor of walking and biking trails along the old railroad right-of-way north of Lake Street through the heart of South Minneapolis to the Mississippi, the Midtown Greenway Coalition (MGC), essentially say, Prove it. (Audio below)

The MGC cites Minnesota’s rules and regulations for determining such need before the Public Utilities Commission (PUC) issues the OK for erecting towers adjacent to and crossing the Greenway and stringing high-voltage lines to a proposed substation at Hiawatha. Lake Street businesses believe additional power capacity is absolutely essential, but they can see why Greenway folks – backed by their neighborhood members in Phillips (including Little Earth of United Tribes), Corcoran, Seward and Longfellow neighborhoods, among other friends, insist that, if the line is built, it could go underground just as easily as overhead.

The issues and emotions run deep. More than simple aesthetics, public safety issues are in dispute as the formal Draft Environmental Impact Statement issued in January will be dissected and commented on in coming weeks before going before the PUC, then, most likely, to a contested case hearing before Administrative Law Judge Beverly Jones Heidinger once again.

TTT’s ANDY DRISCOLL and LYNNELL MICKELSEN talk with a couple of the principals in the legal and policy clash that has thus far consumed well over a year of public and coalition/neighborhood time and angst.