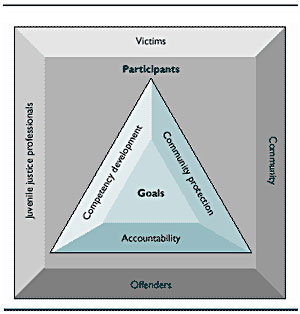 For all the hoopla around trying children as adults for some of society’s worst crimes and shoving more and more men, women and children behind bars, little is understood about the many ways some people in communities, in law enforcement and the criminal justice system overall are looking at and trying out new ways of  achieving justice without imprisoning or jailing so many of our offenders.

The hue and cry for throwing some of society’s least dangerous offenders behind bars as if anyone committing a crime deserves complete removal from home, jobs, families and the community at-large has made the criminal justice system the worst of political footballs – and it’s costing a mint to house them at Stillwater or Shakopee or any of the other institutions holding more and more inmates.

Politicians – with the all-too-willing complicity of our mainstream media – have scared the hell out of huge numbers of citizens by  insisting that the only place for an offender is behind bars – and essentially throwing away the key. Such an easy out for those who should be trying to restore dignity and losses to victims and offenders alike. And that goes double for the young – the juvenile offender on whom much of society has given up already. Off to the pen with them all!

But, prick the corrections professionals at all levels from the feds on down to local neighborhoods and you’ll see some remarkable stories unfolding as alternatives to such drastic measures are under way to keep minor offenders and kids out of the hoosegow.

Professionals have gone to great lengths in recent times to find alternatives to incarceration and they’ve generally come up with good anecdotes and data, and we’ll hear from advocates and prosecutors working to divert lightweight offenders into restorative justice programs.

TTT’s ANDY DRISCOLL and guest co-host MICHELLE ALIMORADI talk with several of those professionals in the throes of restorative justice work.