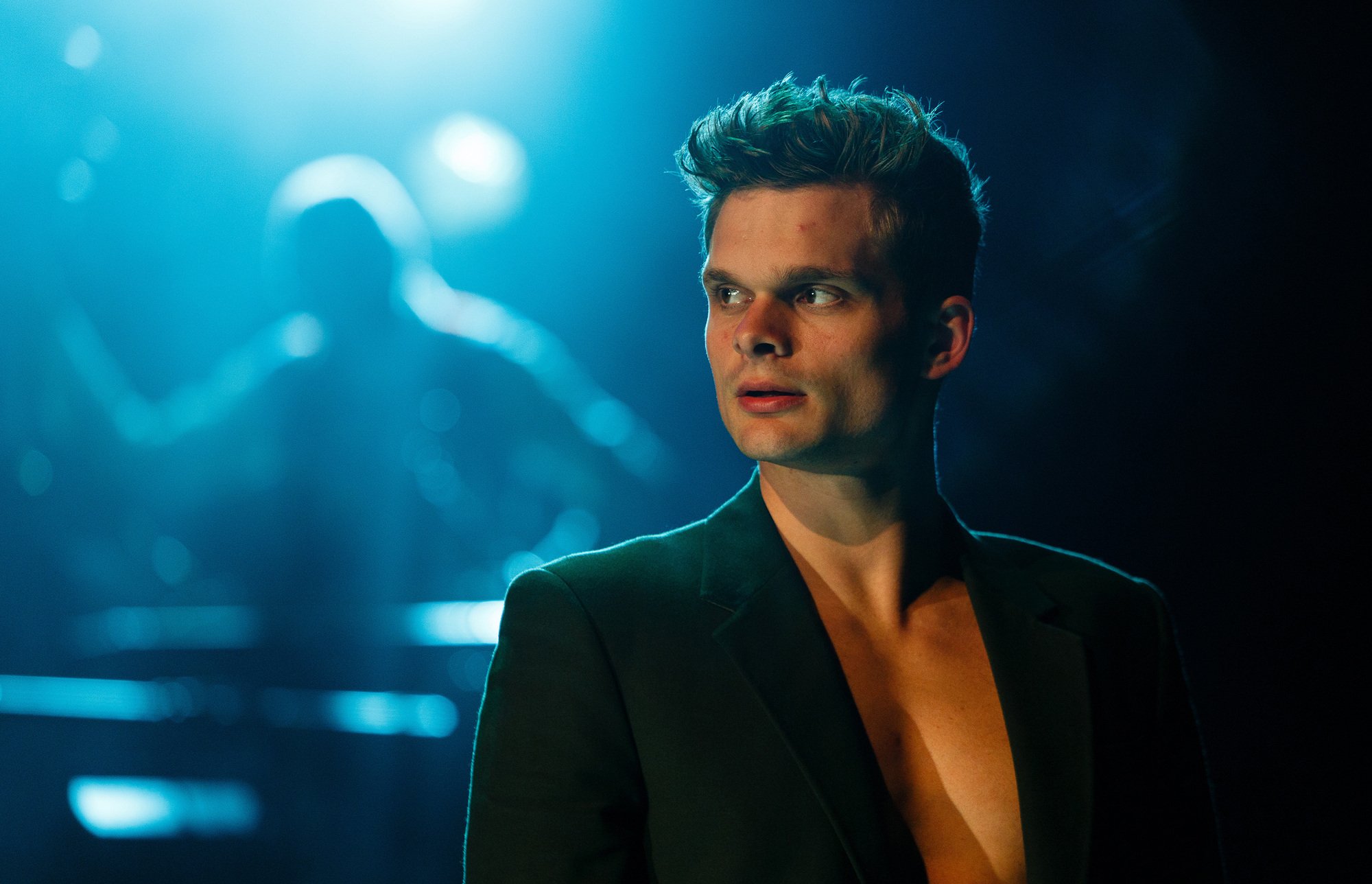 Anarchic, hectic, mesmerizing, silly, and diverting, Tristan & Yseult presented by the English company Kneehigh from Cornwall, is a universal circus for the unloved, the lorn in love, the love frenzied, and the love mangled.

Suffused with Arthurian associations, Cornwall – like the wood outside Athens in A Midsummer Night’s Dream – contains a magical and transformative geography. Puckish play and wit can transmogrify bliss and pain. The solid serious world can melt and metamorphose. Kneehigh’s signature “joyful anarchy” tunes into this reality-warping Cornwall when presenting their version of one of Europe’s most storied Celtic knots of doomed love, jealousy and betrayal. Tristan (Andrew Durand) and Yseult (Etta Murfitt) fall for each other — assisted with a love potion — as Yseult travels to marry King Mark (Stuart Goodwin) of Cornwall. Is there some way that this Celtic tale can illuminate contemporary Britain?

The Welsh author, Marcus Tanner, argued in The Last of the Celts that the search for Celtic identity is fraught with two ironies of unraveling: British identity has weakened as empire and Protestantism have dissipated in relevance; and, the real Celtic languages are fading under an onslaught of irresistible consumer capitalist Anglicization. Discerning a “cultural weightlessness” at the heart of a contemporary confused and uncertain British identity, he insists, spurs a quest for the Celts. Thus the mirror of Celticism allows one a “counterweight to what they perceived as deficiencies in their own societies.”

Emma Rice, the production’s director, makes this counterweight perception highly literal and visual in Tristan & Yseult. She includes within the passionate Celtic knot of Tristan, Yseult, and King Mark the unloved: “The chorus takes us through the piece, a band of “love-spotters,” or the unloved. These are the people who look in on life, who are not chosen to play the starring role — these are at the heart of the production, because, if we have all known love, we have also known the opposite.”

If there is a void in British identity, it is crowded over with the spectacle of theatricality. For this to be feasible, the script would have to be a scaffold, a sawdust arena facilitating the circus. Entire honking fleets of blood-red double decker buses could drive through this script. Yet. . .yet the genius of the production flowers forth from how this hollowed out, bus ticket thin script presents its protean theme. This theme – love’s hellish sweetness and heavenly pain for the loved and the unloved – is grasped in an adamantine hold until it provokes an answer. This answer is vertical theatricality as a manic circus-like spectacle.

If Tyrone Guthrie (1900-1971) gave Minneapolis a thrust stage to break past the limits of the proscenium and expanded theatre into a larger horizontal space, then Kneehigh expands theatre vertically while ironically playing on the McGuire Proscenium. If in 1963, a thrust stage was the latest in innovation, then today finding height is the latest innovation in form. Finding new stage pictures means going up and up while obeying a law of levity. Balloons are handed out to the audience, which fizz and voom when King Mark and Yseult return from their marriage ceremony. The audience is hectored into volubly toasting the fragile couple. Later, they are serenaded and encouraged to sing along to Bob Marley’s “No Woman No Cry.”

Immense poetic stage pictures form and entrance the audience as the unloved clad in anonymous gray woolen open-faced balaclava hoods, black-framed owlish glasses, and dark blue anoraks raise, elevate, and entwine the lovers in the high acrobatic spaces above the stage. Whirling, looping, swinging, pendular intoxicants, the mythic lovers operate on a plane high above the mundane and, certainly above the Club of the Unloved where, on a backstage balcony-style platform, a house band pours out a delicious multi-instrumental accompaniment to love at a scalding potion-propelled temperature, to love as soul-knifing jealousy, and to love’s negation in the goofy ensemble playing of the unloved (who look oddly reminiscent of the minions in the Despicable Me movie series.)

This multidisciplinary circus-opera, this night-clubbing dance epic, this clown-crowded audience-participatory Celtic tragedy of the loved and unloved will salve your heartache. It vertically stretches the space of theatre past many physical platforms into an arena of acrobatics and packages the whole with a winking and sly twist of Cornish magical mist. It is a show that deserves to be seen at least twice.