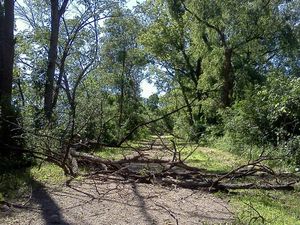 A line of storms that whipped up violent straight-line winds across much of Southern and Central Minnesota hit Hutchinson’s city forest hard Friday night.

By yesterday afternoon, most of the debris had been removed from city streets and the Luce Line Trail in town. Once joggers and bicyclists using the trail reach city limits, it’s a different story.

West of Hutchinson, the state trail was blocked by toppled branches and trees.

High winds in Hutchinson Friday night downed many trees, broke off thousands of branches, tipped a semi-truck over along State Highway 15 north of the city and rip much of the roof off of the Hutchinson Animal Hospital at the corner of State Highway 7 West and California Street.

City workers will be helping residents with the extensive clean-up, Mayor Steve Cook told the Leader Friday night. Residents may place downed branches and limbs in the boulevard along the street (not in the street) and crews will begin picking them up Tuesday.

I live in the northwest part of town, not far from that corner, and biked down to the community gardens to check my plot after the early evening storm passed. It was tough going on the Luce Line Trail in town, since dozens of large branches covered the trail. I saw quite a few trees down as well.

Yesterday, the trail was cleared–until I reached the edge of town, curious to see how the shutdown might affect the hundreds of people who jog, dog-walk and bike the path. I didn’t get far, since just west of town, branches and trees had fallen across the trail. While I was snapping photos, one muscular runner with a Marine buzzcut and smile roughed it, picking his way through the obstacle course. No one else tried.

No saying when storm damage on other state parks and recreation areas will be cleaned up. Before the storm on Friday, the Marshall Independent reported in Area state parks: open … but not:

Camden State Park closed down on Thursday in anticipation of a state government shutdown, but will still be available for day use this Fourth of July weekend. . . .

If the shutdown continues throughout the weekend, day use will be permitted until 9 p.m. but law enforcement personnel will enforce closing hour.

“Day use is OK, but you can’t rent anything and you’ll have to hike in,” Dinesen said. . .

The storm damage changed all that in the area an hour and a half southwest of Hutchinson. The St. Paul Pioneer Press reported yesterday in DNR: Fallen trees make Camden, St. Croix parks unsafe:

Minnesota wardens are urging residents to stay out of two state parks that sustained severe tree damage in a recent thunderstorm.

He said the parks were closed anyway because of the state government’s shutdown. But he said it’s extra-urgent to stay out because of safety issues.

Niskanen said once the shutdown ends, it could take several days before crews can clean the damage and reopen the parks.

That’s a victory of sorts, the Marshall Independent reports in LGA call a win for cities, counties:

Cities and counties across the state of Minnesota won a battle in the midst of an ugly war this week when Ramsey County District Court Judge Kathleen Gearin ordered that Local Government Aid must be paid regardless of a government shutdown.

While Minnesota Gov. Mark Dayton and top Republican lawmakers continued their clandestine-like negotiations Thursday to come to terms over the state’s $5 billion deficit, cities and counties breathed a little sigh of relief over Gearin’s decision.

“We certainly welcome the court’s decision,” Marshall Mayor Bob Byrnes said. “Most people agree that it makes sense. The intent of Local Government Aid is to be sure that basic essential services are provided in communities.” . .

On Friday night, I heard fire trucks and other emergency vehicles  at least  a half a dozen times. Good to know they were running. Now, who will clear the trails outside of town for runners and bicyclists?

Photo above: Luce Line Trail west of Hutchinson on Saturday. City crews had clean the trail inside city limits.