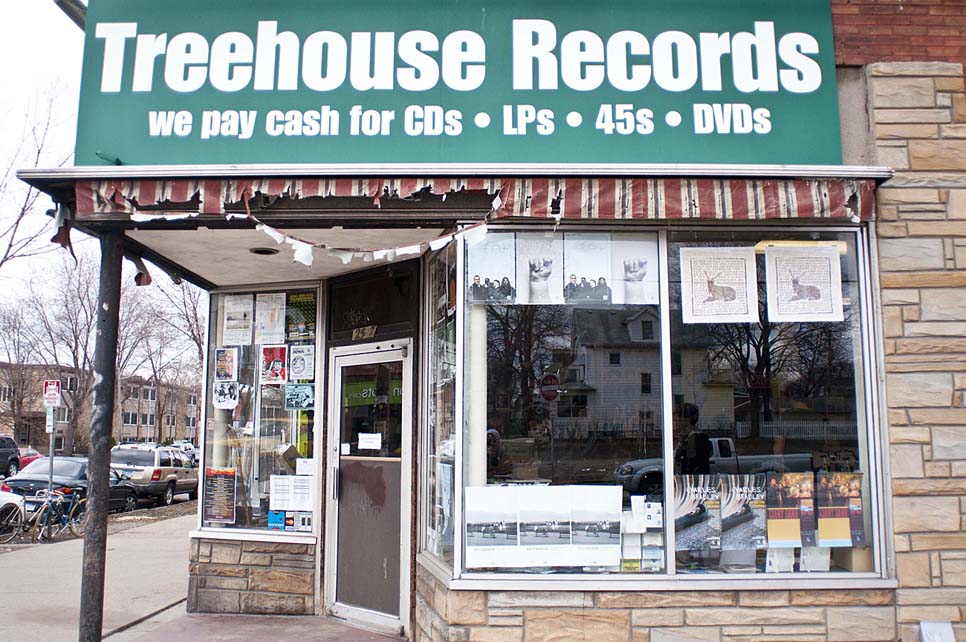 It smells like the 1980s: a little bit stale tobacco smoke, a little bit unwashed dog. This is appropriate, I guess, because this same record store with a different name (Oarfolkjokeopus, a very different name) was the high tide point of the Minneapolis music scene during a time when the Minneapolis music scene was the high tide point of the American music industry, and that time was called the 1980s. Old vinyl has its own smell anyway, but all the vinyl in this store is not old, and all the musical wares are not vinyl. Still, that’s what it’s known for, Treehouse Records: used vinyl. There are also new releases, and some used CDs and you can buy tickets to First Avenue shows and occasionally there is live music in the store. Mark Trehus, the owner, used to be the manager of Oarfolkjokeopus, and he bought the business, but not the name, in 2001. Trehus also used to own a record label with the same name, Treehouse Records, in the 1980s and 90s, but it is no more. Just the record store, ticking along at the corner of 26th and Lyndale, a corner where Trehus has been doing business for 28 years.

Is it the best record store in town? This is debated. There are not as many record stores nowadays for obvious reasons. High-volume music consumers, if those even exist any more, get their fix from Amazon, or Best Buy, or iTunes. But serious music consumers, that’s a different story. Perusing the customer reviews on Google and Yelp and their ilk, you notice that there is a small, noisy minority of would-be buyers of rare and collectible records who object to the “snooty” attitude of the staff at Treehouse and compare them to their main competitors, Electric Fetus and Cheapos (although the three are very different stores, in their stock selections as well as their ambience and mission.) But I suspect that for the hardcore, this “attitude” is a vital part of the experience. (In fact, some of the other reviewers as much as say so.) You can’t be threatened by the superior knowledge of a counter clerk or even a store owner when you’re intent on scoring a piece of vinyl history. You want them to be superior, don’t you? But not mean; you don’t want them to ignore you or insult you outright. The ideal in a record store, like in a serious bookstore or an antique shop, is that perfect balance of knowledgeable, aloof, and accessible. And they need to have the perfect record/book/object that either you didn’t know you needed until you saw it, or that you have been fruitlessly searching for for 20 years and have given up on.

I ventured down to Treehouse to test the hypothesis. As a 60-something fat bird with highly mockable musical tastes, I am a good test case, but I sweetened the deal further by showing up 15 minutes before closing and drifting in the door with no intention of buying anything (or of checking my bag at the counter, as the stern sign commands.) Mark Trehus himself was manning the counter, and I have to say he was not at all “snooty”, but very polite and even a little chatty. Even better, while browsing the aisles, I discovered an album that is iconic in the extremely obscure micro genre of 1970s lesbian-feminist country rock, which, wait for it, I have been looking for for over 20 years! And it was only eight bucks! And this, ladies and gentleman, is why used record stores and used bookstores and their like will probably never go away. That serendipitous feeling: nothing else is quite like it.