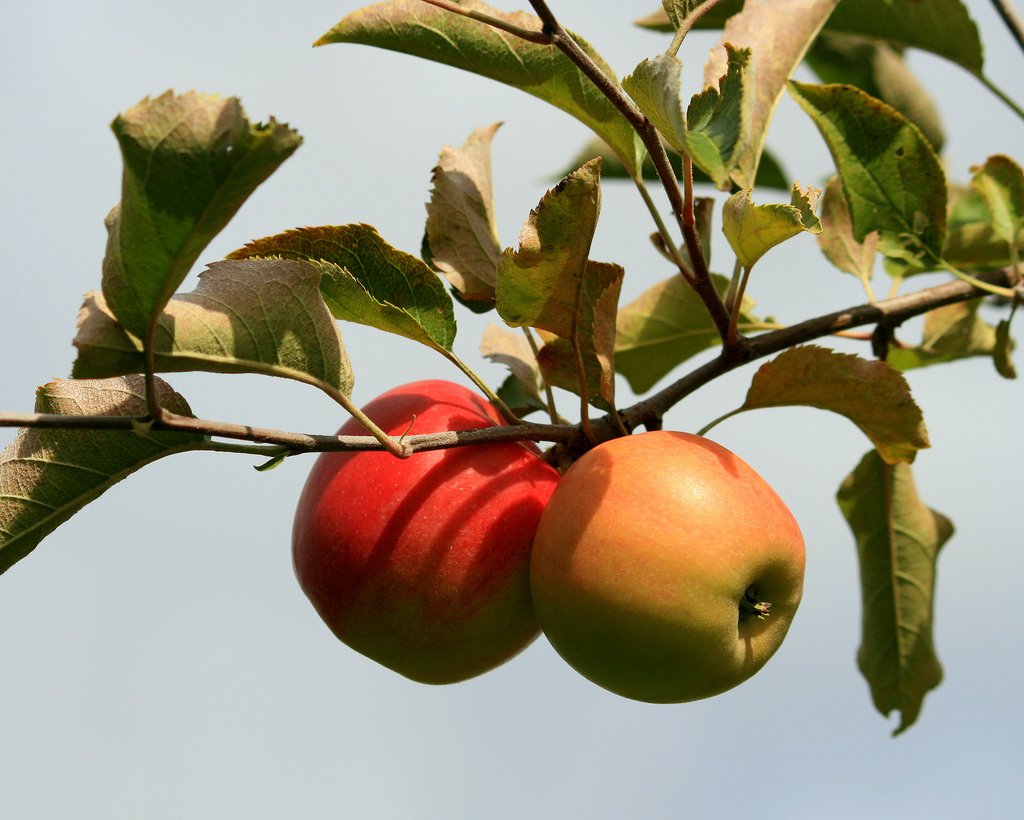 It’s common to make biblical references when we want to underscore how ancient something is, but in the case of apples, we know they’ve been around for a very long time. Originating in Central Asia, hybrid varieties propagated through grafting were well established over 6,000 years ago. Today there are over 7,500 cultivars world-wide. Despite the range, diversity and quantity of apples produced in the world, however, Malus domestica apparently isn’t measuring up to the modern consumer’s expectations. At least that’s what Neal Carter, president of Okanagan Specialty Fruits thinks. He has developed genetically engineered Granny Smith and Golden Delicious apples that won’t turn brown when the flesh is exposed to air. Carter isn’t alone in searching for technological improvements to the apple. Nanotech coatings to keep fruits like apples, pears and mangos firm are already in use.

Something isn’t adding up about the tree of knowledge of good and evil, but evil does seem to have its eye on our forests. The Arctic apple debate is rightly focused on the fruit of the apple tree, but looked at from a slightly broader perspective, this is part of a corporate campaign to introduce and expand the genetically engineered trees into our forests.

One of the more absurd examples of the drive for GMO trees is The American Chestnut Foundation’s (TACF) partnership with the State University of New York College of Environmental Science and Forestry (SUNY-ESF) in Syracuse to develop a genetically engineered (GE) blight-resistant American chestnut. With the financial backing of major biotech and chemical companies, SUNY’s GE chestnut project is supplanting TACF’s 30-year, citizen science–driven plant breeding project that has made significant advances in bringing back the American chestnut through hybrid crosses. The return of an icon of American forestry that was decimated by a virus in the early 1900s has been reduced to a foot in the door for the genetically engineered forest industries.

TACF invites us to “[i]magine a future in which the native range of the American chestnut is reforested with the 4 billion trees that once stood in our eastern forests.” This image would, by any conservation standard, be an amazing achievement, except for the fact that these would be genetically engineered trees.

Genetically engineered American chestnuts might not by themselves be the greatest threat to biological diversity in our forests, but given the chestnut’s historical stature and the significance of bringing it back into our forests, it is not unreasonable to imagine that the biotech companies and their academic retainers view the approval of the genetically engineered chestnut for release into the wild as an important step in gaining public acceptance of GMO trees. Apples and chestnuts are Trojan horses for the biotech, energy and paper companies that want to introduce a wide range of GMO trees to meet their industrial needs.

Plant diversity begins in the forest, not in the garden and not in the farmer’s fields. The introduction of four billion genetically engineered chestnuts, bruise-free apples, invasive eucalyptus, highly flammable pines and other varieties of genetically engineered trees might provide companies like Okanagan Specialty Fruits, ArborGen and Monsanto with trees for industrial uses, but in return we will be making a serious error that will inevitably lead to the loss of plant biodiversity. We need only look at what happened when this same technology was set loose in our farmer’s fields. In 1995 Monsanto received permission to market GMO corn and soy beans. According to the USDA, today 90 percent of corn and soybeans grown in the U.S. are genetically modified. What happened to all the varieties of corn that we grew before 1995?