With the recent news about Green Line training and test trains taking long amounts of time to travel end-to-end from Saint Paul Union Depot to Target Field in Minneapolis, I thought it would be useful to take a look at how long it takes to travel a similar distance on existing buses (according to the published schedules). Routes 16, 50, and 94 each connect the two downtowns. The 16 is the main service, an urban local route along University Avenue which runs at all hours of the day, 7 days a week. The 50 is a limited-stop service overlaid on the 16 route, primarily operating during peak periods and only running on weekdays. The 94 is an express bus running along Interstate 94, also operating 7 days a week, roughly 20 hours per day—its 94B and 94C variants make stops at Snelling Avenue, but the 94D goes directly between the two downtowns (some westbound 94D buses also stop at the oddball Huron Boulevard station—but there is no facility at all for eastbound connections).

Because many westbound services skip traveling all the way to the 5th Street Transit Center / Ramp B in downtown Minneapolis, and none of these routes go to Saint Paul Union Depot, I decided to compare travel times from the bus stops closest to the Nicollet Mall station in Minneapolis and the Central station in Saint Paul instead of using end-to-end times. See the chart data here. 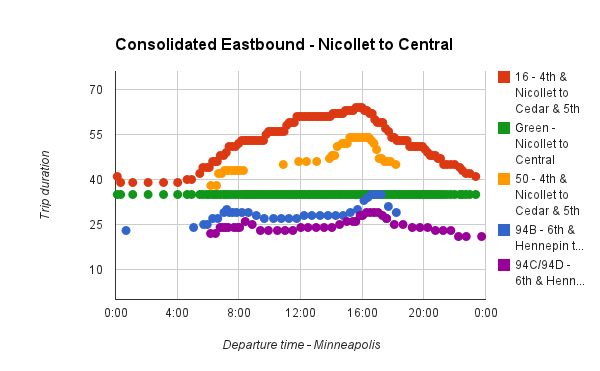 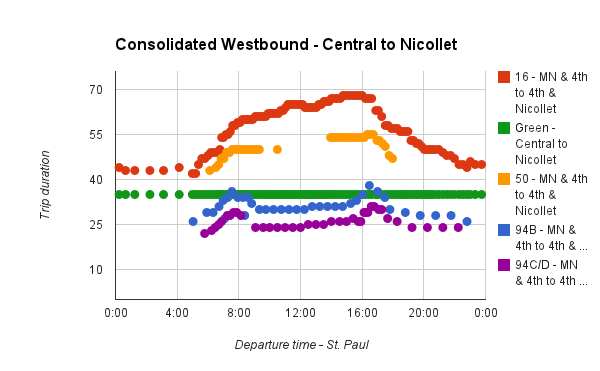 According to estimates shown in 2012 during planning of bus service changes, computer modeling has projected the travel time between Nicollet and Central to be 35 minutes, so I put a green service on my plot with that speed. We don’t yet know for certain whether that will change, or the exact frequency of service, so I just duplicated the trips of the 16 and set them to have a consistent speed. However, new schedules are expected to be posted today at this page.

The 94 is generally scheduled to be faster than the Green Line, but anyone who has ridden it at peak times will tell you that the schedule can often turn into a fantasy if there is too much congestion on the interstate. I’ve had trips on the 94 be lengthened by 15-20 minutes even without weather being a factor. It also has a lower overall frequency of service than what’s planned for the Green Line, and is really two routes in disguise. I made it show up in two different colors because of the alternating speed of trips of the 94B versus the 94C and 94D. The 94B goes past the Minnesota State Capitol, up to University Avenue, and back down Marion Street before getting on the highway toward Minneapolis, but the 94C and 94D are more direct. Frustratingly, there are periods of the day when you can get on a 94B several minutes ahead of a 94D, but have the 94D arrive at the same time or a couple of minutes ahead of you in the other downtown.

Even with these graphs focusing on downtown-to-downtown travel, it’s important to recognize that relatively few riders will be taking the Green Line all the way from one downtown to the other. Most trips will begin and/or end somewhere in between.

Personally, I have to say that the travel time measurements recently put forth by reporters at MPR News feel a bit dubious. I recently took a drive down University Avenue where a train caught up to me just as I started at Marion Street in Saint Paul. We leapfrogged each other between Marion and Snelling, then the train got a good lead on me from Snelling to MN-280 before I finally caught up with it. That’s a pretty competitive speed, although I wasn’t set up to time it exactly.

Despite the clickbait-y tone to parts of the piece, it did explain that a lot of tuning work was still in progress—particularly in downtown Saint Paul where some new equipment had just arrived.

It is certainly worrisome that the trains are not operating at proper speed now, since proper schedules are set to be published very soon, but there’s very little reason why the Green Line, with its dedicated tracks, shouldn’t be able to be consistently as fast as a late-night route 16 or early-morning route 50 bus, and that’s only a few minutes away from the travel times mentioned before.

The Green Line may never be as fast as a good run on the 94, but for anyone taking a ride to or from somewhere between the downtowns, it’ll have a big benefit over what the corridor has had before.