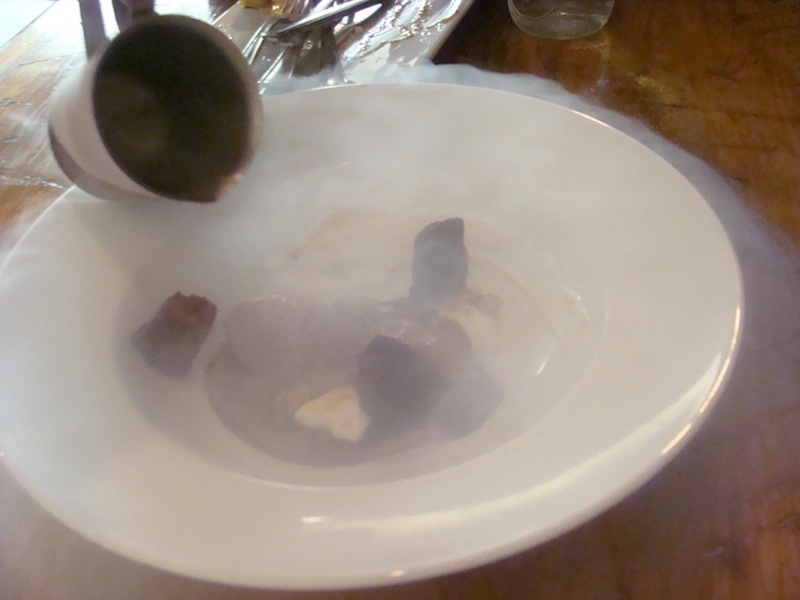 For my birthday, Carol offered to take me out to dinner anywhere I wanted to go, and I chose Travail  Kitchen and Amusements, the new restaurant and wine bar in Robbinsdale. I had been to the little storefront on Broadway once before by myself, and only sampled a few dishes, but was intrigued enough by what I tasted that I wanted to return.

This is no-frills dining at its best – or rather, the frills all arrive on your plate. A counter, a bunch of tables, a concrete floor, and no written menus – just blackboards that get edited as the night goes on. On this visit, I noticed something new on the blackboard menus: an offer of ten courses for two for $60. Which courses you get is decided by the chefs on the fly.

We took our chances and hit the jackpot. Not every dish was wonderful, but the level of creativity was amazing, starting with the first course. Our beet salad ($5 a la carte) offered up beets five different ways: roasted, pickled, fried into crisp chips, made into aspic, and dusted as a powder onto the plate, served with a sprinkling of ricotta. This was followed by morsels of octopus with cantaloupe and honeydew ($7), a smart combination of sweet and savory accompanied by cubes of orange and green cantaloupe and cornichon jelly.

To take you through all ten courses would ruin the surprise if you visit Travail yourself, but other highlights included homemade blue cheese tater tots ($4), little cube of pork belly cooked sous vide with a confit of trotters, pear and cashew butters and baby bok choy ($9), and the dessert, Fire and Ice, a piece de resistance of chocolate mousse, tiny chocolate brownies and a dollop of meringue, finished at tableside with a propane torch, to brown the meringue, and then a freezing bath of liquid nitrogen.

Carol doesn’t eat meat, so she opted instead for the fish and chips, fillets of cod (I think) in a light and delicate batter, served with potato chips and potato salad ($13) – not quite as creative as the dishes on the tasting menu, but very tasty all the same.

The chefs – James Winberg, Mike Brown and their team – came to Travail by way of Porter and Frye, and most recently Victory 44, and there’s a pretty strong resemblance to Victory 44 in style and menu. But these guys also seem to draw inspiration from the likes of Ferrran Adria of the legendary El Bulli (credited with using liquid nitrogen to create hollow spheres of sorbet.) The level of creativity is almost manic, but simpler fare is also offered – one recent menu’s offering included a Broadway butter burger, a pressed pastrami sandwich, or a vegetarian lasagna ($7).