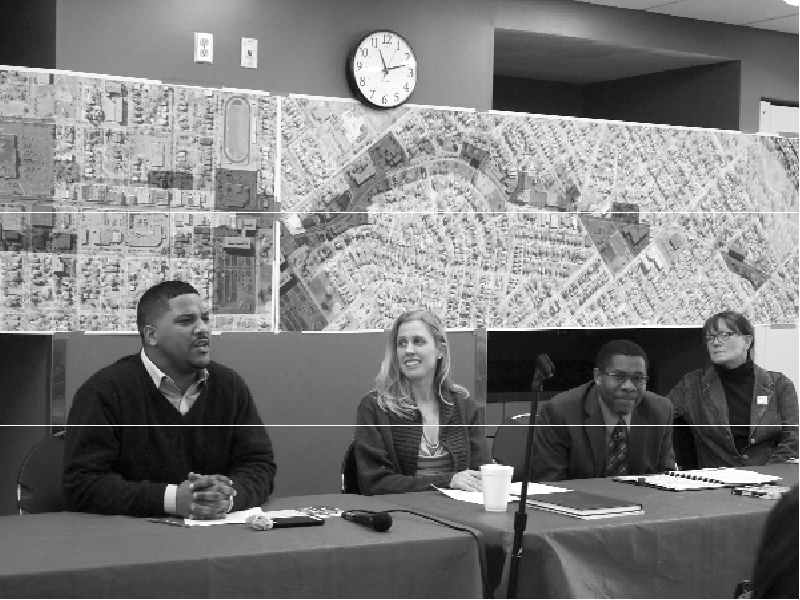 Jamil Ford, Alissa Pier, Paul Bauknight and Paula Pentel, during their panel discussion. It was noted that in the map behind them, the compass direction north is down, the river is at the left. (Photo by Margo Ashmore)

Which comes first, reduction of negative factors, or positive development? That chicken-egg question was the heart of the matter when about 45 community leaders, developers, residents, business owners and city planners gathered at the YMCA on West Broadway April 17 in the morning, to discuss plans to improve the area, addressing a campaign pledge of City Council Member Blong Yang to hold a “summit” on the issue. The objective was to develop “solutions, visions and improvements to revitalize West Broadway.”

In his introductory remarks, Yang said that he wanted to implement changes that have been discussed for decades; that his personal motto is “Get stuff done!” (With a smile he noted that he sometimes uses a different word for “stuff…”)

Paula Pentel and Erin Heelan from the West Broadway Business and Area Coalition (WBC) led the agenda with a discussion of “West Broadway Alive: A Revitalization Plan for North Minneapolis’s Main Street,” a plan that according to the city’s website, “guides future development and public realm improvements, and offers a roadmap for revitalization by naming near- and long-term actions to be undertaken around which the energy and resources of stakeholders can be focused.”

During her remarks Pentel, an urban geographer by training, noted that the two-year planning process for West Broadway Alive (August 2006 – March 2008) involved “the most culturally inclusive public participation and outreach” she had ever seen. All of the neighborhood associations that bordered West Broadway endorsed the plan. Pentel noted that she was particularly struck by the plan’s use of the word “cherished” to describe the West Broadway area – “that doesn’t happen too often.”

Heelan followed up with an overview of some of the specific projects underway such as Broadway Flats, Broadway Crescent, Cookie Cart’s expansion as well as infrastructure investments from Juxtaposition Arts and the Capri Theater. She also described design enhancements planned for the area including holiday banners and streetscape improvements.

The dichotomy of the words – historic/emergent/potential, opportunity/underutilized– reflect conflicted perspectives of the area and the complexity of determining how best to address the issues. Participants also offered up words such as “support locals” and “vital, alive” as well as “misunderstood,” “patchwork,” and “disjointed.”

The exercise provided context for the subsequent presentation by Jimmy Lloyd and Jim Voll from the city’s Community Planning and Economic Development (CPED) department as well as the open discussion that followed when the meeting was running 30 minutes ahead of schedule. Yang praised the speakers for following his directive to “be concise.”Lloyd highlighted CPED’s top three goals: create jobs, increase the tax base and create neighborhood vitality. Part of those aims, Lloyd described, is to make West Broadway a destination shopping area to draw people to the area. Business owner Susan Friedman of Friedman’s Department Store at 400 West Broadway, a business started in the late 1890s, took offense to Lloyd’s statement as a “destination” business and shared some anecdotes about safety concerns she had. An audience member jumped in, noting that Lloyd’s point was that the area needed more business like Friedman’s to draw customers to West Broadway.

Jackie Cherryhomes, a consultant and former council member who described herself as an “eternal optimist” and 37-year resident of North Minneapolis, challenged the attendees to frequent existing business and restaurants in the area such as Avenue Eatery and the local Cub Foods. She also said it is important to increase the population density in order for businesses to thrive on West Broadway.

The underlying chicken-or-egg issue is what needs to happen first to increase the vitality of the neighborhood: Does improved safety and livability of the area need to happen before more businesses will invest in the area or will more business investment in the area help improve the safety and livability of the area? For Lloyd and others the answer would be both, that a “holistic solution” is needed. Lloyd for one is “confident and hopeful” that the community can make it happen if everyone works together.

DeVon Nolen, who made it clear she was speaking as a resident, asked the group to recognize the people in the area as “assets” and that many people in the area are living in poverty and consequently their foremost concerns are making a livable wage, safety and shelter – their basic needs. She said that until we address these issues the conversation is “just a dream and won’t come to a reality.”

In a panel of developers, George Sherman, who developed Hawthorn Crossings in the 1990s and now proposes to renovate 800 West Broadway for a Workforce Center, said that he will be collaborating with the Minneapolis Public Schools, community colleges, and possibly others to make West Broadway the place to go to see beyond high school education.

Tim Baylor spoke about his motivation to do the Satori project (see the April edition of NorthNews). “I’m here to cause trouble, to be the lightning rod to make it happen. Maybe it won’t be me, but I can tee it up.” For all the money that’s being spent on transportation arteries which cut up and cut off the Northside, to the money spent on stadiums, Baylor said, “You need to demand…to insist that this happen. I can’t believe we don’t have a few hundred million” to put toward a project that will revitalize Broadway.

Steve Minn, developer for a project at Penn and Broadway that will house workforce housing and a new Broadway Liquor store with other retail space, talked about the quality development that owner Dean Rose seeks, “as good as any in South Minneapolis.”

Local perspective came from another four-person panel, which included Pentel and three architects. Pentel highlighted the need to respond to the Draft Environmental Impact Statement now out for the Bottineau (transportation). She talked about West Broadway Coalition’s efforts toward a self-managed Business Improvement District for common maintenance, “I think that will change perceptions.” With the FLOW art crawl, the West Broadway Farmer’s Market, and other initiatives by an effective staff, “we are respected by the city and grant makers,” Pentel said.

Paul Bauknight called for more people to come to the table, that professional skills are important but “it’s the people (who) will make the difference and allow us to do this.”

The design profession is inequitable, Bauknight said, and told of his effort, Community Renewal for Innovative Building (CRIB), to bring more people of color into the profession.

Alissa Pier said “the planning dictate should not be ‘just better than what it is now,’” we should not settle. “I really want to spend my money here, and there’s no place to. We do have crime, but our lives are not defined by it.”

Jamil Ford asked for a show of hands, and determined that well over 50 percent of those in the room do not live in North Minneapolis. He remembers growing up being able to get on the bus with no fears, and a local bike shop owned by a black resident. We need to “inspire our youth to be entrepreneurs. If we don’t get this right today, outsiders will define for us.” He urged “turn North Minneapolis into the front yard, not the back yard,” of the city.

Then Gretchen Nicholls of Local Initiatives Support Corporation briefly talked about the Accelerator program that was available to businesses along the University Avenue corridor during light rail construction.

Russ Adams pointed out the boxing in and cutting off of neighborhoods by I-94, I-394 and Highway 55. His organization, Alliance for Metropolitan Stability, supplied the map of people of color that was hanging on the wall.

Other thoughts captured: Keith Reitman said light rail should have gone down Broadway, all the way, and that he supports Baylor’s project. Andrea Jenkins and Erik Takeshita said the inclusion of arts is important. Zoe Holloman of Appetite for Change offered to bring people together for discussion using their format that is built around preparing and eating food. State Representative Joe Mullery, whose district now extends to Broadway, said the City has not brought the legislature any projects that benefit the Northside. Everything brought recently has been by Hennepin County, he said.

Ford urged people to play by the rules and guidelines set out by WBC and the West Broadway Alive plan, and alluded to “Spike Lee on gentrification (after he moved to the East Side). When whites redefine communities,” they make them to what they understand. “We should have defined areas, like Eat Street, for cultural tourism.”

The morning ended with another word cloud exercise characterized as more cohesive and upbeat.