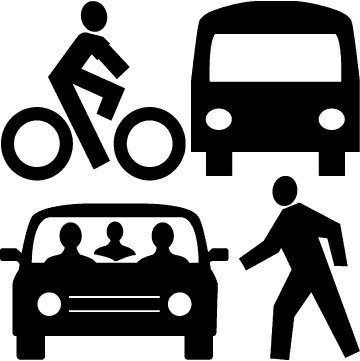 We often hear from transit advocates that expanding public transportation is good because it increases the choices available to people. Framing the issue this way reveals something about the deeper commitments of the supporters, namely that it is a good in itself simply to expand available avenues for people to assert their will. The ability to choose, regardless of the kinds of choices people make, is good. It is then often suggested that what the city or state or governing authority needs to do is incentivize certain choices above others; or it is hoped that people acting in their own rational self-interest will choose well. To increase available options is believed to be an equitable move insofar as it levels the field for choosing agents, enabling people who were previously limited with respect to transportation to increase their power.

In this scheme, the state becomes an actor alongside private agencies, companies, and other public bodies, competing for market share in providing services to citizens; citizens in turn are considered primarily as consumers. We are not allowed to think of, for instance, the Metropolitan Council, as a part of the social political body without making the relation an economic one. Politics is reduced to economics, or perhaps rather economics functions as a social ontology, indicating what simply is the order of things.

In order, then, to “compete” and “succeed,” transit agencies aren’t allowed to ask the kinds of questions we might want public bodies to ask, or act in a way that we might want them to act. Instead they must behave in such a manner as to maximize their share of the market. This is at least one reason “efficiency” and “feasibility” so quickly creep up in discussions about transit. It’s not merely about political possibility but a matter of judging public goods by the standards of corporate ‘success.’ Such measures are assumed to be morally neutral or at least a natural given.

What is covered up in this language is how choosing, either as a political body or as a person, creates limits on what else can be chosen. To prioritize (and subsidize!) the movement and storage of privately owned, individually driven automobiles limits what other modes of transportation make sense; because the engineering of public space engenders a certain kind of relation of people to their environments. This is, among many other reasons, why I find BRT partially problematic; not because it isn’t a relatively efficient and helpful way to move people, but because it simply accepts auto culture as the norm and doesn’t challenge it. It takes more than paint to make cycling safe and it takes more than nice bus shelters to create healthier urban spaces.

Moreover the rhetoric of choice refuses to interrogate class and race issues surrounding transit and infrastructure. For poor people and many people of color, taking public transit is the only way they can quickly and safely get to work, to stores, to school, and so on; they are without choice, limited by a host of factors, the majority of which are outside of their control. Without the ability to afford a car, it is only for those who already have that ability that “options” are expanded when better transit is available. People with lesser means continue to be excluded from a full social and political life.

And often for the economically disadvantaged, not only do they not in fact have a choice when it comes to transit, but they are maligned as dependent; whereas a financially enabled white man who chooses to live car free, ride bikes, and take transit is hailed as a moral exemplar, full of civic virtue and care for the environment. Both use the same modes of transportation, but the “choice” of the one is exemplary, the other a result of moral deficiency.

Related is the way that transit in general is often framed as a service. This is explicit in the Twin Cities where trains and buses tell us they are “A Service Of The Metropolitan Council.” While I would not want to lose the ability to speak of “service” positively, as I would like to keep alive the language of “dependency”, it is not unimportant that functionally this vocabulary results in viewing transit as a type of welfare rather than as a social and public good. (Not, of course, that welfare is bad or shameful in any way. I only mean to draw attention to how advocates are fine propping up the current system with a kind of ‘benevolence’, but are unwilling to challenge the deeper roots of socioeconomic inequality. It is all the worse that welfare carries with it a stigma.) And in the Cities there is the literal analogy to the time and energy it takes to navigate the complicated, spotty bus system and the time and energy it takes to prove you’re poor enough to need WIC or public health care.

What I hope is emerging from this analysis is that the language of choice is not innocent and in fact hides problems and assumptions that I believe we ought to challenge. If we are to advocate for the expansion of our transit system, then the rhetoric of choice ought to be abandoned in favor of language that is more socially democratic and inclusive, that encourages us to think about shared goods and public ethics.