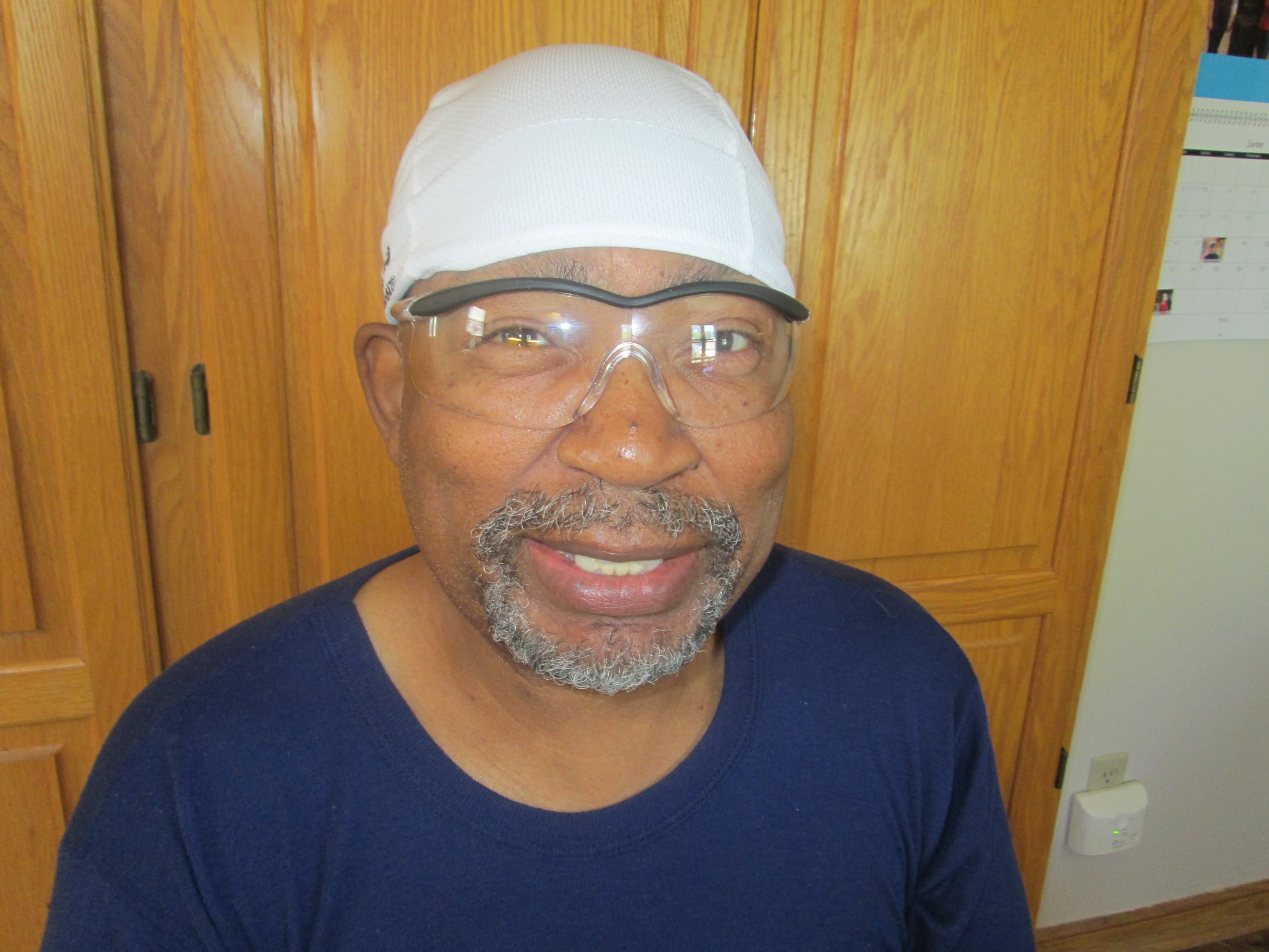 Transpo Convo is an ongoing series in which I interview people about their transportation use. This second installment features highlights from my conversation with Bill D., in which we chat about icy winter riding, revamping roads for greater cycling infrastructure, and how to build effective cycling advocacy.

Bill lives in the Kenny neighborhood in Southwest Minneapolis. He works for Cycles for Change in St. Paul and is active in Major Taylor Minnesota, Minneapolis Bicycle Coalition, Bicycle Advisory Committee of Minneapolis, and the North Minneapolis Greenway steering committee.

[Bike commuting] allows me to clear my head in both directions. It allows me to unwind on the way home. On the way in it allows me to think of what I need to get done that day, to arrive at work with a clear head.

Bill D (BD): Mostly by bicycle, I’d say 90-95% by bicycle. Or I should say, to be more accurate, bicycle/bus. Since my job is in St. Paul I’ll usually bike to downtown Minneapolis or to the West Bank of the U and take the bus over to St. Paul [or] the Green Line train.

CWW: What do you like about bike commuting in the Twin Cities? What’s your favorite thing about it?

CWW: What’s your least favorite thing about bike commuting in the cities?

BD: It would be in the winter when the roads are all rutted in. That happened 3 or 4 times this past winter, where you get a snowstorm and then have bikes out or cars out and it gets to 30 or 40 below zero, so all those ruts freeze and it makes it very difficult to bike. There were a couple times this winter where I was just on the bus 4 or 5 days in a row until those ruts could melt and the roads could become more passable.

CWW: So what do you think would make biking in the super snowy rutty conditions better? What could the city do to make that experience better and easier for bicyclists?

BD: They could plow the bike lanes. Right now the bike lanes are just the default for where the snow goes instead of pushing it up on the curb, and I guess to a certain extent it’s a catch 22. The city is not going to do it until you get more bicyclists out in the winter and the bicyclists aren’t going to come out if they have to ride in traffic. I find myself riding in traffic a lot in the winter because that’s the decent part of the road, and I do find drivers a lot more accommodating toward bicyclists in the winter than they are in the summer. But it is a catch 22.

I think the bicycling community could do a better job of encouraging people to bicycle in the winter. Just don’t assume everybody’s going to put their bike up come November or December, just really get out there to drum up cycling and publicize it. A lot of people shy away from bicycling because they get cold from dressing improperly, so you’ve lost the battle right there, regardless of what condition the streets are in. So if you can get them to dress properly and layer properly then you can chip away on the street maintenance.

This is a Hennepin County road, we can’t [put in a bike lane] because you’re going to take away parking. What parking? People don’t park there. But because it’s laid on their grid plans as parking they’re assuming that it is parking.

CWW: Is there anything else you’d like to say about your transportation use in the cities? What you like or what you don’t like about it?

BD: I think the Twin Cities does a good job. Obviously this [Midtown Greenway] is excellent. […] What could be done in the future to make it even better is to extend this Greenway all the way into downtown St. Paul. And that’s going take a lot of doing because you’re dealing with railroad right of way and they are difficult to deal with, but if you could take this all the way into downtown St. Paul, then branch off to the train to the left or Highland Park to the right that would be a significant improvement.

But the other bicycle infrastructure, what our big fights are with the Minneapolis Bicycle Coalition and their bicycle advocacy, you have suburban engineers come in and the street needs to be milled and overlaid or the street needs to be completely redone. And they basically want to put the street back down the way it was taken up, period. Here’s a prime example of this, they’re going to redo 46th Street from 35W over to Hiawatha. It’s 4 lanes, 2 in each direction. In theory the right lane is supposed to be parking, but nobody parks there because their cars would get trashed or destroyed, so for all intents and purposes it’s two travel lanes in each direction. They want to put it back that way and we are trying to get them to go from a 4 to a 3 with a turning lane in the middle and put a bicycle lane on the right side on each side of the road in opposite directions. But no, this is a Hennepin County road, and they’re actually the worst to work with, we can’t do that because you’re going to take away parking. What parking? People don’t park there. But because it’s laid on their grid plans as parking they’re assuming that it is parking. And there will be a handful of people that will complain, because people want free parking right in front of their house. […] Engineers definitely listen to these folks. And sometimes politicians will, sometimes they won’t, depending upon how vulnerable they think they are to not being reelected.

So this 46th street thing we are trying to get them to go from a 4 to a 3 and the people at St. Joan of Arc’s Church, they’re complaining they can’t get across 46th Street to go to worship services, and other churches further East have the same complaints. If you’re a suburban engineer just looking at plans and maps and how it’s laid out for usage and you never drive up and down that street during all times of the day and see that it’s actually a travel lane and not a parking lane, you think you’re losing parking. Those are the battles that we have to fight all the time.

[Eventually] we will prevail because the bicycle advocates aren’t going away and the demographics are in favor of the bicycles. It’s just a matter of how fast you get it done. Do it faster and you actually get more bicyclists in the street.

CWW: So what do you think would make inroads to those people who have the authority to say let’s bring it from a 4 to a 3? How can we best make inroads with that?

BD: Well, you have to inundate them with people, you have to get them involved in the campaigning, you have to convince the elected officials, like council member Glidden who is already convinced. The way you get to them is to get their constituents up in arms.

You have to get the businesses on board and convince them that losing parking spaces right in front of their store and putting in a bicycle lane is actually going to gain you business, which is counter-intuitive to a lot of business owners, especially older owners who have grown up with their customers driving right up to their stores. But if you see who is moving into the neighborhoods and who is out on the street, some of them see it, and some of them don’t. And that’s what the bicycle coalition does is try to work with those interest groups so they all come together and when this road is done it comes in with bicycle facilities and bike improvements. But a lot of times they’ll go ahead and put it back the same way but we’ll keep the pressure on. Eventually we will prevail, because the demographics are in our favor, it’s just going to cost them money in terms of painting over all the paint and re-striping. But eventually we will prevail because the bicycle advocates aren’t going away and the demographics are in favor of the bicycles. It’s just a matter of how fast you get it done. Do it faster and you actually get more bicyclists in the street.

We’re just always watching for those opportunity projects. You just can’t go on a street that has no scheduled maintenance and say let’s put bike lanes here, you can’t do that because it’s too costly, we just won’t do it. But we have the list of streets that are due to undergo repair, or mill and overlay or complete reconstruction, and we look at how those are being used and we look at how they’re planning on putting back. And in most cases we have to get in there and say, hey, we really ought to reconsider. Sometimes we prevail and sometimes we don’t, but where we don’t prevail we are going to stick with it because, again, the demographics are on our side.

Thanks for the Transpo Convo, Bill!

At top: Bill and I talked bikes, bikes, and more bikes while watching hoards of rollerbladers zip by on the Midtown Greenway.