Julie Gilbertson repurposes drums from bulk food-grade products and car wash soaps, for rain barrels. The captured water is used to water garden plants, and she said the easiest way is to just dip a container into the barrel, which is covered by a screen to keep leaves out. The spigot is convenient for hand washing. (Photos by Margo Ashmore)

What if we couldn’t rely on world-wide transportation to bring us our food, or fossil fuels for transport and heat? We have the tools right here.

At a show-and-tell day meeting, about 20 people interested in the “transition” movement found kindred spirit, detailed examples and a reading list at the Northeast Library Feb. 4 on those topics plus a lot of information about keeping and using what falls on your property. They came from as far away as Buffalo and Saint Paul, thanks to web posting as a meet-up, and local publicity. The Northeast group meets at Diamonds Coffee Shop every Tuesday morning at 8:30 and welcomes newcomers anytime.

Transition refers to lowering dependence on fossil fuels, using energy efficiently and becoming as self-sufficient and local as possible, anticipating the end of fossil fuels and the calamity of climate change. Some who met confessed they started getting interested in the topic upon losing a job, and are finding that spreading the word has been a source not only of savings, but of income.

For example, Julie Gilbertson custom-designs, constructs and paints rain barrels, telling her clients “never let a downspout dictate where you put a rain barrel.” Hers are placed where convenient for the end use, watering plants, and the downspouts are extended accordingly. Barrels can even be partly buried or elevated.

Jeff Z, whose blog is eighthacrefarm.blogspot.com, detailed the varieties of fruit trees on his city lot in Saint Paul and gave secrets for raising blueberries (add peat and sulfur, and weave in some rose clippings to discourage rabbits who don’t like thorns). He encourages the rabbits to eat his vegetable garden leavings in winter so their droppings provide fertilizer right there. He fences the garden during growing season.

He has a system of below-ground drain fields for storm water, and advocates burying dead squirrels, if one finds any, to improve raspberries, just like natives used to bury a fish under every corn plant. He’s tapped his silver maple for sap to make syrup, and boxelder sap also yields syrup, though it has to be boiled much longer.

Lynn Grider said spruce buds, high in vitamin C, are good for sun tea. The group discussed how ash from burning wood can add potassium and neutralize slightly acidic soil. “Another use for ashes, sprinkle them around plants to keep slugs away,” Gilbertson said.

Tim Jordan, who with Peter Doughty and a man named Edwin make sure there’s someone at the Tuesday morning meetings, brought two examples of what were loosely called “rocket furnaces,” the technical term “top-lit updraft stove.” The smaller version is a soup can within a paint can, both of which have holes punched in the bottom. Fill the can with sticks and wood chips, light the top layer, and the material burns downward. Air flow between the metal sleeves brings a super-hot, concentrated flame out of the top of the stove, hot enough to boil water or cook what’s perched above it on a tripod. The larger version is made from a pot, a piece of sheet metal, and an improvised regulator. 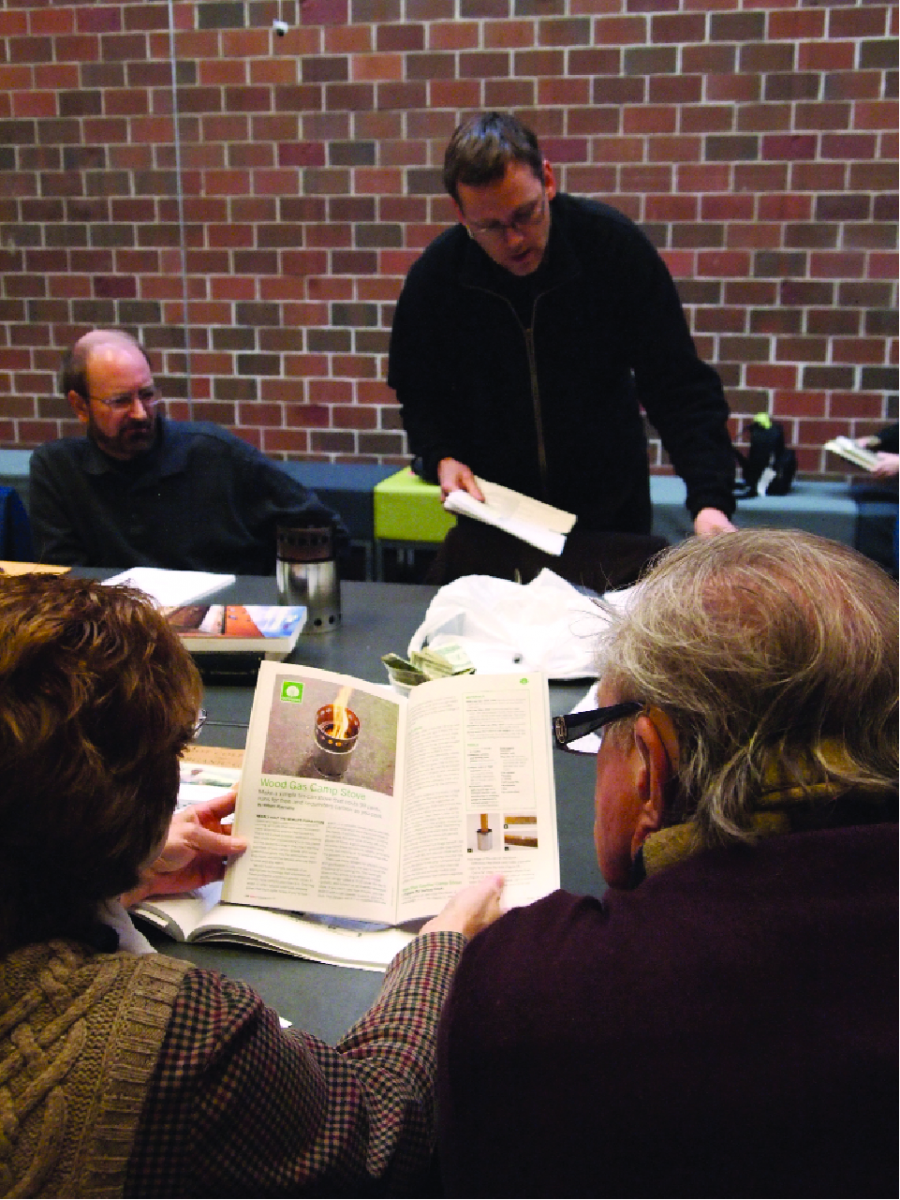 Tim Jordan, standing, one of the most active Northeast residents in the Transition group, passed out literature on stoves that burn very efficiently. Below, he shows how he regulates air flow through his top lit updraft stove. 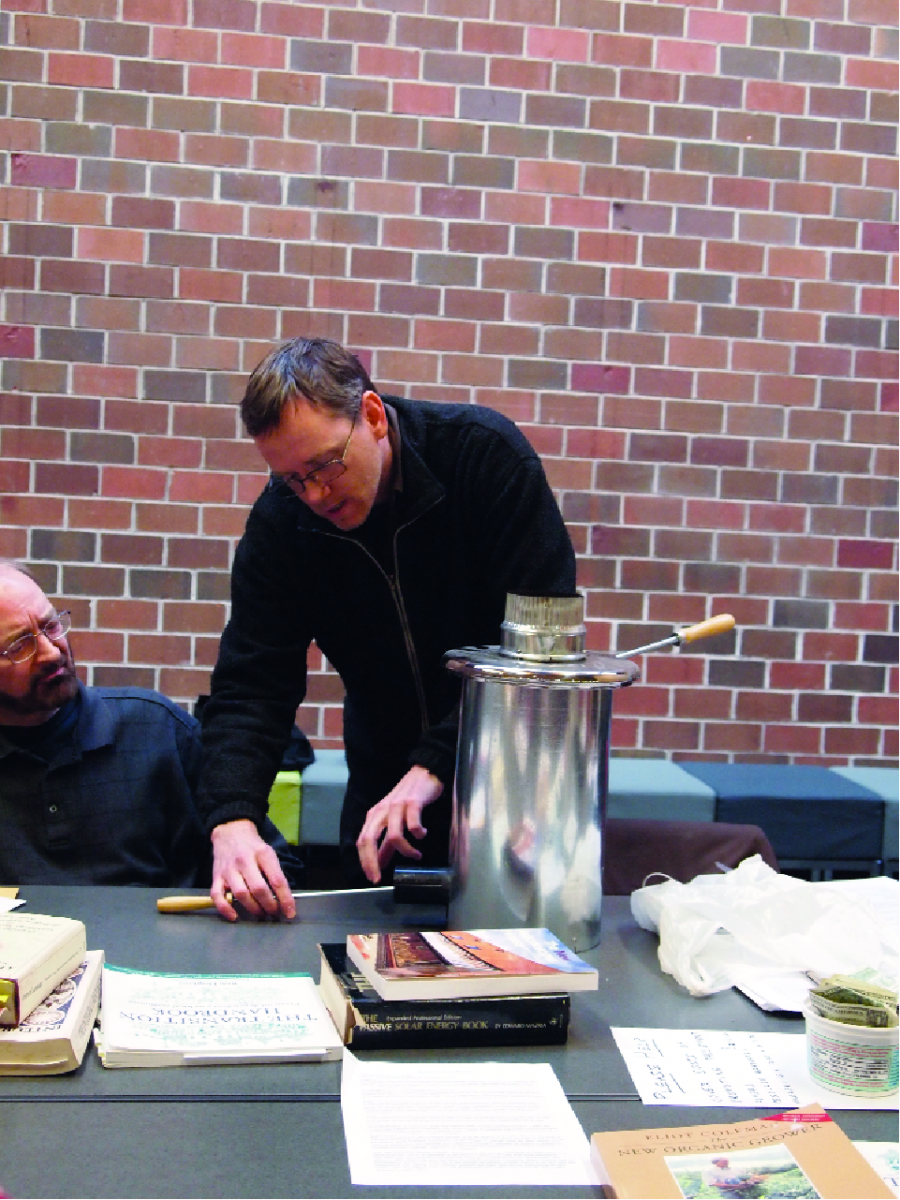 In this example of wood gasification, Jordan said “the point was to make it flexible as to fuel source,” as some sources would become scarce. “Use old romance novels, there’s plenty of them,” one person chimed in. They discussed how to stop the fire in time to have “bio char” left over, charcoal that can be used to amend soil.

David, who works at the Eastside Food Cooperative, talked about canning. He gave the example of canning meat, “it has to stay at 10-11 pounds of pressure for 75 minutes with 20 minutes to abate (cool down, lowering the pressure). And you can’t just let it stay in the water, and let it cool down overnight, “though I sure wanted to,” during several long sessions this summer putting up 1,000 jars with his wife.

He also explained why canners should take the rings off their jars once the products have cooled: Water can collect in the rings, rust the lids and cause the jar to fail. Plus, you can test the seal by holding the jar by its lid. A ring could hide the fact that a seal had broken.

The reason one shouldn’t use canning recipes over 25 years old? Tomatoes were more acidic in the olden days, and pantries were much cooler, two elements that kept high-acid canned goods from spoiling. Today’s recipes compensate for the difference.

Click for more info on the Northeast group and others in the metro area.