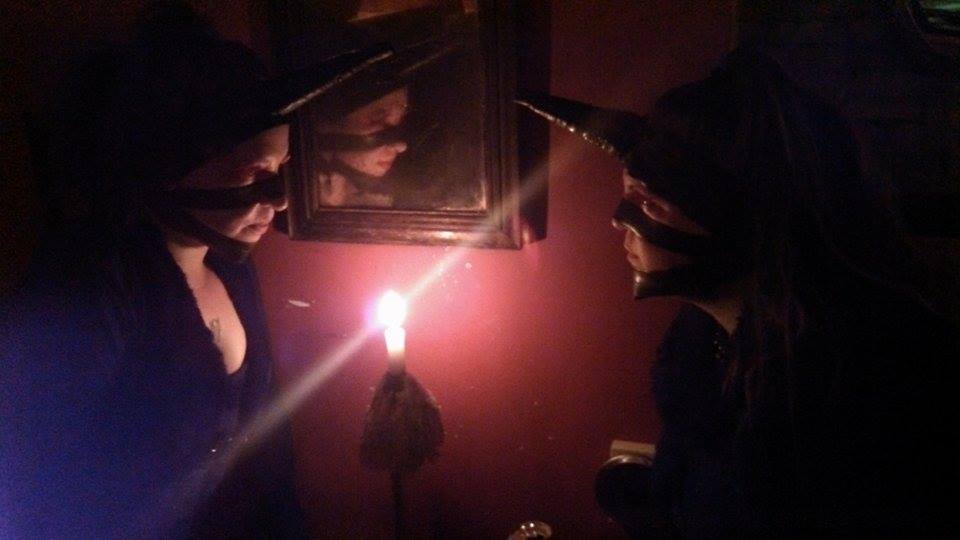 Noise has found a new home at the Kitty Cat Klub. There have been a few shows there in the last month – and rumor has it more to come in the future. Monday night brought out some local noise performers who haven’t played in Minneapolis for a while, performers who shuffled into new configurations and one from out of town. I always feel new to the genre although I’ve been to quite a few shows now. I’m learning that one fun thing about noise is that everyone has a different interpretation. The theme this night, if I had to pull one out, was vocals. Everyone on stage used vocals, live and /or recorded in their performance.

The night started with Juhyo – two guys, soundboards with keyboard and visual accompaniment played on the backdrop of the brick wall. You could feel the vibrations almost as much as hear them. They sounded like wind down a cold hallway. There was a voice.  The performance swayed from choppy helicopters to siren-like wailing of whales. As a child of the 80s, I was a particular fan of a sound that was reminiscent of old school space invader shooting. It was a good variety of sound.

Next came The Beheadresses, two lovely women in unicorn masks singing about unicorns marching, charging frolicking in your misery. There was an undercurrent of staticky thunder – set off by playing of a child’s multicolor xylophone – the kind you may have had as a kid. It was a nice blend of guttural low thunder and tinny plucking of the xylophone keys. Both played backdrop to the vocals, which were very much like a dramatic spoken word poetry piece. Fun to watch and hear.

Gnawed was next, and he brought out the big amps. He was nice and loud – again the sound seemed based on vocals. There was a droning breathy voice that became more rhythmic and building and shouting with tapes and switches. But I have to say it was the loudness that made the show. The loudness, the feel of the vibrations, it all adds to the experience.

Dromez, from Austin TX, was next. A powerful woman with a strong voice, tapped into Gnawed’s sound system. Most noise seems to be based on feedback, vibrations and reverberations – sort of the underside of music. Dromez went a different direction. There was a droning background but the foreground was harsh and piercing. Dromez sang or shouted and it seemed that’s where the droning began but it was the series of piercing sirens and the raw energy that stood out.

Transitional Agony finished out the set. Two local noise musicians playing together. Again it started with recorded vocals – maybe saying “you are the machine” repeatedly. Accompanied by industrial percussion. Once they got into a groove it was an industrial beat like soldiers grinding away or a buzzsaw being warped. It was mesmerizingly loud and rhythmic with blasts of static and guttural waves.

It was a good range of noise performances. Each performance is about 10-15 minutes. So it really can feel like five different shows – each set is different but there are some common themes