Transit planning. If the phrase gave you a cold shiver as it called up memories you’d rather repress, we should talk. It’s been a real horror show here in St Paul as a parade of officials and hired engineers have stood in front of citizen committees and neighborhood gatherings telling us whatever they thought we wanted to hear and never (never!) listening. The decisions were always made long ago by people more interested in chasing pots of money, appropriate or not.

The same shiver went up my spine when I heard that the West Side was holding a meeting on their own transit plans along Robert Street (or US52). I read up on the materials, talked with people, went to the meeting and … I have to tell you, I think this is gonna be allright. And when we get our plans going in the West End soon we have every reason to hope this will work out. Here’s why. 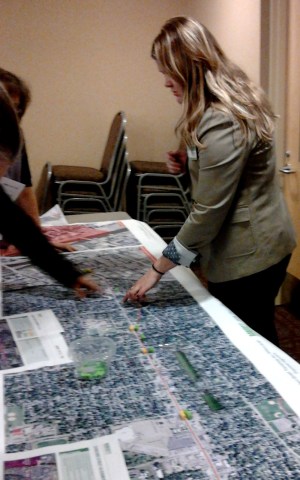 Those of you who have been unfortunate enough to be cornered by me on this subject know that I had one very serious political loss in my life – one that will always haunt me. I spent over ten years trying to convince anyone who would listen what a terrible idea it was to cram LRT (Light Rail Transit) down University Avenue. Those who were pushing the billion buck plan did everything possible to confuse the issue, even comparing it to a Streetcar – cutting off my main alternative before I could say a thing. But, as people in other cities know, there are alternatives and systems appropriate for a built-up urban environment.

The problem was that the plans were set about 1990 and they were not going to be changed. The Feds would kick in about half of the cost, and that put dollar signs in everyone’s eyes. Nevermind that in 1995 Portland started looking into alternatives and found that Streetcars cost a quarter to a third as much – still less than the half unfunded by Feds. Nevermind that they had theirs up and operating in 2001, long before we were even close to building a line (still under construction). It was LRT and that was that.

So when the notice came that Robert Street is under consideration the trauma came back to me. Another neighborhood of immigrants and poor people was about to be trampled by an engineering firm out to mint serious coin by building something grossly out of scale, right? I read up and studied quickly.

Boy, was I wrong. My experienced paranoia and cynicism was way, way off the mark. The West Side is gonna be allright. 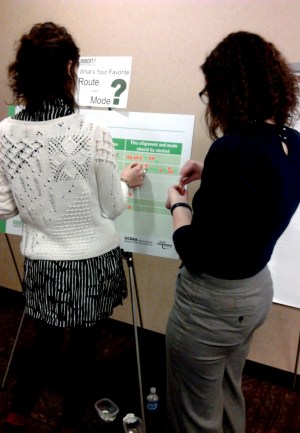 First of all, a different engineering firm is on this study. They are Kimley-Horn, and they know how to do this stuff right. They selected potential corridors to deliver people south out of Downtown St Paul first. They then wrote down what was appropriate in each corridor, quickly ruling out LRT on Robert Street. What was left over they have now gone to the neighborhood for comments, laying out big maps so that people can point out key places where they would need access to transit. The studies that were done to get them to this point are laid out and public, open for commentary.

There’s a chance that they won’t get a Streetcar line on Robert Street out of this after all. It may not prove to be a good idea given things like ridership, street width, and so on. An LRT on US52 is one of the options, and it’s not necessarily a bad idea in the long run. But what is important is that they laid out what was reasonable and then went to the community for input. We won’t know until the next stage, when a preferred option is selected, how well this will turn out. So far what we know is that nothing is being crammed down people’s throats and the truly destructive ideas have been ruled out up front. This will not be another University Avenue.

What is important here is not just that the West Side finally gets something good that they can be proud of – they’re due, way over-due sometimes. In my own West End, down West Seventh, we are starting our own transit planning with the blessing of the City (thanks Dave Thune!) before the greater powers start defining what and where we can study. We want to be ahead of the curve and recommend positive action – getting us out of the reactionary position of opposing something stupid from greater Powers That Be.

We now have a model and a success story to build enthusiasm off of. There are good engineers and planners, and there is a good process. This can work out. We don’t have to be afraid and react out of adrenaline fueled memories of trauma. That’s the greatest success of this story.

Here’s to you, West Side. All the best to my neighbors and friends – you deserve it!