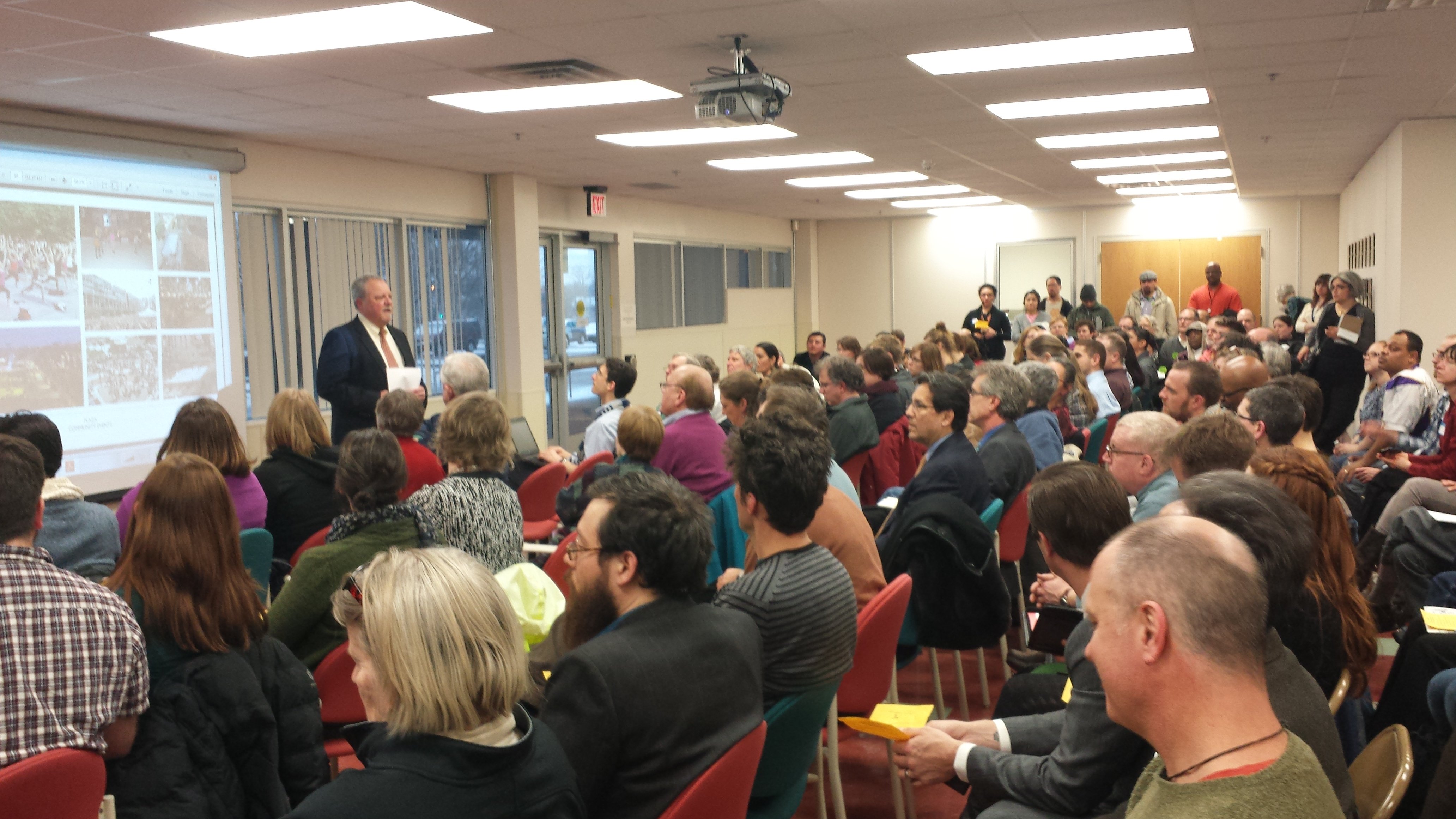 The future of the 6.5 acre parcel of land at the corner of Lake Street and 22nd Avenue was once again up for discussion at the Corcoran Neighborhood Organization’s Land Use and Housing meeting on April 3.  Despite the snowstorm, community members and county representatives filled the room and voiced their visions and concerns for the land. A  private development company, L&H Station Development, hopes to purchase the land, which is currently owned by Minneapolis Public Schools (MPS.)

The future of the Midtown Farmer’s Market was a big concern for many of the community members in attendance.  The rendering that L&H developer Jack Boarman presented showed a new permanent location for the market on the east side of the property, but a little further back from Lake Street than it is now.  Miguel Goebel, the manager of the market, voiced his concern that this would create reduced visibility and attract fewer customers.

The planned housing developments were another topic of discussion among community members.  Many people wanted to ensure that there would be affordable housing available to people in the community, so that the spaces would not invite gentrification.  Boarman explained that of the roughly 450 housing units the new property would include, many would be specifically designed affordable family or senior housing.  He also plans to keep rent low by offering many one-bedroom apartments that are under 700 square feet, with the rest being leased at market price.

Attendees also heard from MPS Chief Operating Officer Robert Doty, who made clear that the successful relocation of the services housed in the school building on the site is the top priority for MPS when considering the sale. These include Adult Basic Education and Transition Plus programs, He said that MPS is considering different options, including relocation or staying on the property in a new building, but it is certain that those services will continue to exist for the community.

Newly elected Ninth Ward City Councilmember Alondra Cano spoke briefly at the meeting.  “I wanted to talk about this project as an issue of equity,” Cano said.  She emphasized the importance of input from citizens when considering the future of their community, because, “If we don’t do it, someone else will do it for us.”

Boarman spoke for a good portion of the meeting about what the L&H developers envision the site becoming.  L&H plans to use the property for a new transit-oriented development project, because of its proximity to the Lake Street lightrail station and multiple bus routes.  He showed a possible rendering (view here) of the new layout, which incorporates new retail, multiple mixed-use housing properties, the new site for the Midtown Farmer’s Market, and the location of the new Hennepin County Family  Services Center.  Boarman also detailed the plans to make sure that the development is sustainable, including the use of green roofs, geothermal heating, and permeable surfaces for storm water wherever possible.

Don Sabre of Hennepin County Human Services explained that the family services center is being built as a part of the county’s effort to decentralize its services.  The county is opening six new centers, two of which are already in operation and have been widely successful. Their purpose: to bring their family and human services away from the downtown Century Plaza building and into the communities, where it is more convenient for the people who use them.  Sabre noted that, “People often wait to go downtown,” and said the new building “will encourage people to get help sooner, and provide faster service.”  The Lake Street center will serve approximately 32,000 people in the South Minneapolis region.

The development of this piece of land has been looked at many times over the past decade, but people were still optimistic.  There are, “A lot of wins,” said County Commissioner Peter McLaughlin, “We will provide access to county services, create new vitality in the neighborhood, and provide a permanent home for the Midtown Farmer’s Market.”

The Land Use and Housing meeting was an opportunity for citizens to learn more about the proposed development and voice their concerns before the Corcoran Neighborhood Organization Board of Directors votes on the plan at their meeting on April 10.  If you were unable to attend the meeting on Thursday night, the board is accepting comments online until noon, April 10.