Can Minneapolis finally pull off a high-quality transit-oriented development (TOD) project? Yes, with a little luck, a lot of disparate interests coming to a common agreement, and likely some creative financing. Development plans at the Midtown Farmers Market site in Minneapolis appear to be revived. Included in the multi-phase plan are housing, offices, retail, and perhaps most importantly, a public square that will serve as home for the Midtown Farmers Market. However, the plan is more complicated than ever, so getting this built won’t be easy. This Thursday, April 3 at 6PM the Corcoran Neighborhood Organization will host a meeting so the public can find out more about the plan. It is important to show your support for good urban design and transit oriented development. Check out the plan below. 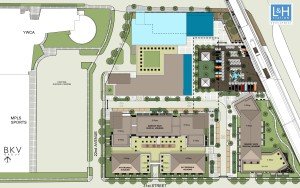 The Corcoran Neighborhood Organization (CNO) has planned for redevelopment of the site and a permanent home for the Midtown Farmers Market for more than a decade, and the present version of the plan you see above was fleshed out in 2009, when BKV Group led a series of planning charrettes. The BKV design team worked with CNO to agree on a general design concept that includes around 500 units of housing, some combination of office and retail space, and a public square that would host the Midtown Farmers Market. I participated in the 2009-10 charrettes as a member of the BKV team on a volunteer basis, which gave me a firsthand look at the process, which has come in fits and starts. Those visions, hopes, and disappointments were chronicled in several posts in 2010, 2012 and 2013.

Details are still forthcoming, but the plan now includes a Hennepin County Family Services Center in an office building that includes ground floor retail space. The Minneapolis Public Schools, which owns the 6.4 acre site presently, has been the primary source of delay for the project as priorities for their use of the site have changed, but they appear to be on board for the time being. Still a vital part of the plan are both a large housing component and the public square.

In spite of all the public agencies with different agendas, as with any development, parking may prove to be the most contentious part of this project. Why? Because every entity believes they need some, demand is sometimes overestimated, it is extremely expensive to build, and even on-street parking isn’t really free. Not only will Hennepin County, Minneapolis Public Schools, the Farmers Market, retail, office and housing each have on-site requirements, there will be off-site concerns as well. Nearby residents may well be concerned about parking demand spillover on to their blocks, and the YWCA (located immediately west of the site) at times has excess parking demand beyond what their on-site parking can accommodate. Previous iterations of this plan have included not only a structured parking lot instead of the YWCA’s current surface parking lot, but also row of townhomes lining the parking structure to drastically improve the urbanism of the area. The best solution may be to construct a parking structure on the YWCA lot to be shared by their users and the services and office uses on the farmers market site. The bottom line is if we make it easy to drive here, people will, and I don’t think that is really in the best interest of any stakeholder. Let’s hope cooler heads prevail, the YWCA remains a constructive partner in this planning process, and we don’t let parking diminish the potential of this project!

I just heard a presentation by a transit-oriented development expert who noted that the roughly 5% of households that don’t own a car make up 25% of all transit rides. Therefore, she says, the best strategy is to build affordable housing near transit that has no parking. That will attract those households, save a lot of money on the cost of constructing underground parking, and ensure that ridership stays high. Chew on that one as we think about parking on this site.

My one primary point of contention with regard to the proposed design is the location of the public square. In the words of Charleston mayor Joe Riley, great cities give their best edges over to the public realm. With that said, the public square and Midtown Farmers Market should be located directly on Lake Street. Why? Because the square is intended as a public gathering space and should have a strong relationship to the major nearby street. The current location makes it seem like CNO wants keep the square more private, have the Farmers Market to themselves, and I believe this is not in the best interests of the neighborhood or city in the long run. As well, too much attention is given to linking the square to light rail, but not enough to the busy bus corridor on Lake. Lastly, exposing more of the public square to Lake provides more pedestrian traffic for each and reduces the amount of retail frontage facing Lake Street that needs to leased. Put the public square on Lake Street.

Additional design considerations pretty much boil down to building frontages and how well the ground floor relates to the streets. As with most planning projects, most of the focus is on the map view (see above) and which uses lie where on the site, but very little attention to how buildings relate to the streets. A high GDA is critical. Be it retail or housing, every building face must be engaging and that includes not just windows but doors. Reduce curb cuts and combine parking entrances when possible. I hope lingering security fears in the area don’t diminish this – more doors actually improves security, and if they aren’t part of the original plan it is very hard to add them later. The present plan shows hints that some of the buildings may have decent frontage, but the west-facing façade of the commercial building in particular could be very car-dominated and lifeless, which would be a shame considering it faces the YWCA across the street.

It is important that we all support good urban design and transit-oriented development on this important site. Minneapolis has yet to prove they can complete a complicated, multiple-use transit-oriented development, and despite the numerous stakeholders in this proposal, it can be done! Don’t let security and parking “drive” this decision-making. Contact city, county and school board representatives and demand an attractive, pedestrian-friendly development that gives its best edges to the public realm and benefits us all. Or just show up on April 3.