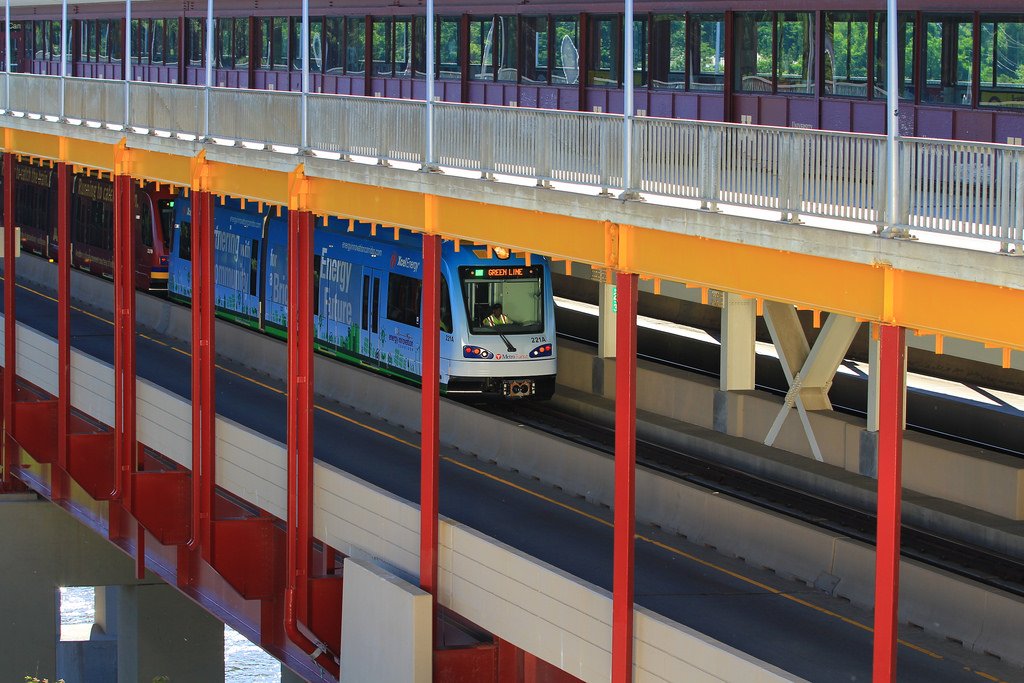 Transit projects make for easy political targets because of high construction costs. They have prices in the many millions of dollars, and occasionally tip into the billions, which brings critics out of the woodwork. It’s difficult to know whether certain projects are justifiable or not, particularly because different modes of transportation concentrate and spread out their costs in different ways.

The $957 million Green Line can’t be directly compared against a street or highway project, because the rail project’s budget contains many things that are (almost) never included in budgets for roads. You might just think of the Green Line as “a train”, but there are a lot of components to that. The rails in the ground are the most comparable to a roadway, but that’s just one piece of the overall picture. Take a trip on the line, and you’ll stand on a platform, pay a machine, and sit inside a vehicle—one that’s riding on rails, taking power from overhead lines which are fed by nearby substations, and progressing according to those dastardly signals we don’t quite know what to do about yet. At the end of the day, the train will exit the line and go off to a maintenance facility to be cleaned and repaired—a place that also provides room for the operator while they’re not driving the train along.

Streets and highways are primarily built for cars, but their budgets don’t include the “rolling stock” of the roadway. Unlike buses for on-street transit and steel-wheeled vehicles for rail, most cars and trucks on the road are owned by individual families and businesses. Only a small minority are parts of government-owned fleets. Unlike the maintenance facilities for rail and bus transit, parking lots and repair shops aren’t included in the cost of a highway. We don’t include the cost of gas stations or the fueling infrastructure leading to them either (comparable to the overhead lines and power substations on a route).

The rail vehicles for the Green Line cost $3.3 million apiece, which certainly looks and probably is higher than it should be, each vehicle carries a huge number of people each day. I was reminded when looking through the National Transit Database that Metro Transit had just 27 light rail vehicles in 2012 for the Hiawatha Line. The line’s capacity was stretched so thin at that point that every single vehicle was being pressed into service. Because they operated from the early morning to late into the night, each individual vehicle hosted about 1,200 trips each weekday. They were usually coupled into 2-unit trains, so each set was carrying around 2,400 trips per day. How many trips does an average auto carry each day? How many cars does it take to carry that many people? How much would those cars cost? How much would it cost to provide parking for that many cars? How much space would they take up?

Since 2012, Metro Transit’s fleet of light-rail vehicles has roughly tripled, but ridership is probably at least double now that the Green Line is up and running. The number of trips provided by a single LRV unit each day has gone down, but is still at least 700 daily. Three-car trains are now common, so the number of riders per train set remains fairly high.

A lot of the infrastructure for rail projects is also built to stand up better over time. Rail vehicles last longer than cars or buses—In 2012, the average age of a light-rail car was 16 years old, compared to 11 years for automobiles and 7 years for transit buses. The vehicles also have lower operating costs per passenger—they’re typically more expensive per vehicle to operate than buses, but each one carries more passengers, resulting in lower costs per passenger-mile. In 2012, it cost 50 cents per passenger mile to operate the Blue Line, versus 84 cents per bus passenger-mile in the Twin Cities.

Transit has a great return on investment as the years go by, especially when coupled with proper land-use patterns. Recovering value from land that would be dedicated to parking can recover tens to hundreds of millions of dollars in value in out-of-pocket expenses for land owners and allow more development in less space. That also leads to a better tax base for the corridor.

It’s often very short-sighted to shoot down transit projects because of high upfront costs. There are certainly legitimate reasons to trim costs and ensure that the right type of transit is being chosen for a particular route, but they pay back in ways that are difficult to see at first. We should be much more ambitious in this region about upgrading existing lines and implementing new ones as appropriate—we need to find better shortcuts to cut through the drawn-out, decades-long debates that have typified transit projects around here because we’re leaving a lot of value on the table by skipping past good routes.

At top: A Green Line train crosses the Mississippi River via the Washington Avenue Bridge.