Advocating for better, more equitable transit calls for new media tools, but only alongside traditional modes of organizing. That was a main theme at a recent Daily Planet New Normal 2012: Get Connected! community meeting. Co-sponsored by the Alliance for Metropolitan Stability, the meeting was held at Rondo Library on June 26. A full room, representing communities from across the Twin Cities metropolitan area, connected over empanadas and other appetizers from nearby Homi restaurant, and some lively exchanges.

New media tools at their best

Marcos Lopez-Carlson, neighborhood engagement coordinator for the Twin Cities Media Alliance, the nonprofit that operates the Daily Planet, observed that new media tools, including the Daily Planet, blogs, Facebook, Twitter, and YouTube give citizens a voice. They have the potential to connect people around issues they care about most. They also provide members of communities whose voices typically go unheard new outlets to share their stories. Important information and ideas can be circulated more easily and widely.

Karyssa Jackson, communications and outreach coordinator for the District Councils Collaborative of Saint Paul and Minneapolis, noted that as a “transit-dependent person and a walker,” it’s been essential to have information at her finger tips during the construction of the light rail system’s Central Corridor green line. Finding and then sharing construction updates could not be done so easily with old technologies.

Through her cell phone, Jackson has been able to connect with others via text messages, Twitter, and Facebook. In her work at DCC she has shared stories through YouTube videos, accessible online. In the communities she works with, Jackson said, conversations tend to move from online to face-to-face. Not everyone has access to the Internet, but some do, and that’s what’s important.

Meeting participants, most of them transit advocates, noted that new media tools, for all of their potential, have limitations.

Because of some of these barriers and limitations, panelists Rick Cardenas, executive director of Advocating Change Together, and Wynfred Russell, executive director of the African Career, Education and Resource, Inc., agreed on the importance of utilizing a mix of organizing tools to engage communities and get messages out. 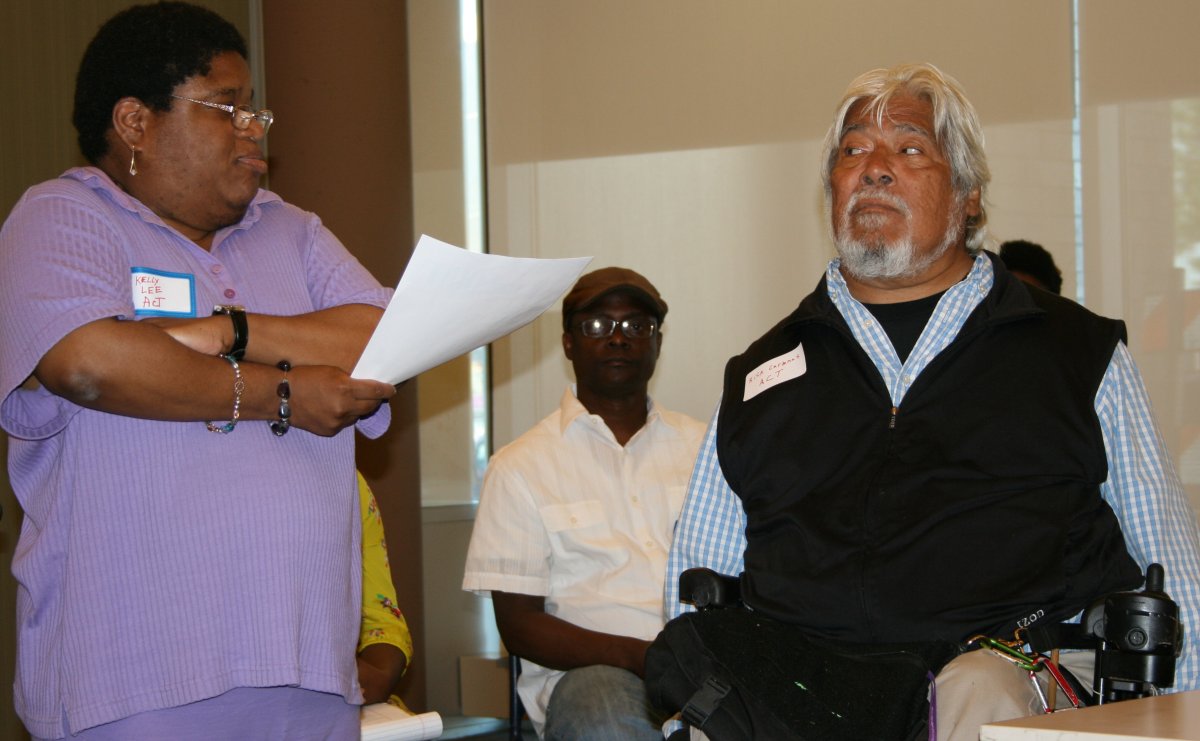 Cardenas spoke about teaching people why it’s important to contact elected officials and showing them how to do it. Kelly Lee, Advocating Change Together’s board president, described the value of organizing trips to the legislature.

Russell, from Brooklyn Park, told of efforts by the Corridors of Opportunity engagement team to convey information about transit through as many different types of media as possible, including Facebook, Twitter, a website, and YouTube. According to Russell, using as many media platforms as possible, including newspapers, ethnic media, radio, and a newsletter, helps reach more people in diverse communities.

Noting that there remain “many people who don’t have deep appreciation or knowledge of how to navigate new media,” Russell said it has been essential to draw from “traditional community engagement strategies” in their work. He described outreach to faith communities—meeting with congregations during their services to explain the benefits of a good transit system—and the use of street teams of young people, who engage others in “hangout spots” throughout the community. He also told about forums and town hall meetings, where residents engage in dialogue and leave better informed. Guided tours, he said, have proved a good way to show members of communities how they will benefit from new transit options.

To become more effective at getting their message out, Cardenas said that he and other civic leaders must first get a handle on the new media tools at their disposal, and then seek training. In response, Lopez-Carlson emphasized that advocates don’t need to use everything available to them, but should identify what works for them and then use it well.

New Normal 2012: Get Connected! is a project of the Twin Cities Media Alliance/TC Daily Planet, supported by a generous grant from the Bush Foundation. Community meetings to connect people around issues related to education, transportation, health care, work, environment, and immigration are being held in various locations around the Twin Cities through October. All are free and open to the public.