Bluestem wasn’t the only one wondering why Representative Tim Kelly was selected to chair the powerful House Transportation Policy and Finance Committee.

While some have speculated that his reputation for being a moderate (established by voting against putting the marriage amendment on the 2012 ballot and floating a bill for civil unions as an alternative to legalizing same sex marriage in 2013) might help him broker a deal, Kelly himself told the Rochester Post Bulletin a different reason last Monday.

We’re not sure how we missed this one. (Thank heavens for Al Juhnke’s weekly aggregation of Outstate News).

. . .Kelly, who recently won election to a fourth term, is somewhat of a surprise pick for the post because he had not been serving on the transportation committee. But Kelly said in a lot of ways his selection makes sense.

“Where I sit, just from a district perspective, we’ve got rail lines, we’ve got freight, we’ve got major highways, we’ve got an airport, we’ve got a river. When you think about it, it’s smack dab in the middle of every form of transportation we utilize,” the Red Wing Republican said.

In addition, he said he lives close enough to the metro area to understand some of the issues there. That’s important, Kelly said, because rural and urban lawmakers are going to have to be willing to work together to get a comprehensive transportation funding package passed.

“We still have to work together as a state, as opposed to outstate versus metro,” he said. 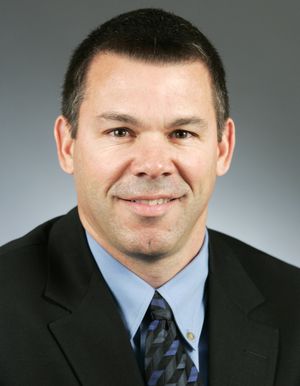 So trains, planes and automobilies–and barges–travel through his district and he drives to the Cities sometimes.

That certainly gives the man more cred than a guy with more seniority who served on the committee last session (and who would have more time served than any other Republican on the committee following several retirements) and who took risks to bring home the transportation bacon for his own district.

There’s not much barge traffic in Southwestern Minnesota, so Rod Hamilton will have to be content shepherding the relatively tiny share of the state budget allocated to agriculture, and at least his recent experience in the human resources department of Christensen Farms is a bit more solid than just having transportation occur somewhere near Mountain Lake.

Perhaps the puzzling part of this drama is the fact that Senate transportation powerhouse Scott Dibble (DFL-Minneapolis) is known for his ability to move bills addressing some of the most difficult issues (from bees to anti bullying and medical cannabis) through the Minnesota legislature, and we find it hard to believe that it would be impossible for Republicans with more transportation budgeting experience to work with their colleagues and Dibble’s Senate majority to pass a significant transportation bill.