Vegatable and beef farmer Tony Schultz is a member of Family Farm Defenders, which sponsored the tractorade along with the Wisconsin Farmers Union and LSP.

The Cap Times looks at Why farmers are driving their tractors to protest at the Capitol:

Monroe County dairy farmer Joel Greeno works 90 to 100 hours a week. He and his wife, who works at a Wal-Mart distribution center, have a 4-year-old daughter and are expecting their second child at the end of April. Despite the fact that both are working, they qualify for health-care coverage through the state-funded BadgerCare program.

“It’s just sad,” says Greeno, 44. “I work hard and my wife works for one of the largest corporations in the world. Where we are right now scares me.”

In the name of narrowing the state’s projected $3.6 billion budget deficit, Walker has proposed sweeping changes to Medicaid-funded programs including BadgerCare, cuts in state aid to public schools by nearly $834 million and a $96 million cut in aid to local governments, including cities, towns and counties.

All those cuts have Greeno wondering what kind of health coverage he will have when his newborn arrives and if the school where his daughter had her kindergarten screening a few weeks ago will still be open when it’s time for her to start school this fall. 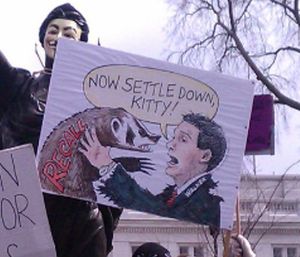 On the seat of his tractor, Chuck Arentz protested the actions of Gov. Scott Walker as both a farmer and a Teamster.

Both will suffer as a result of the budget-repair bill that strips collective bargaining rights from public employees and gives more authority to the administration in dispensing Medicaid to the poor, said Arentz, who runs a dairy farm in Cashton.

“He’s cutting Medicaid for the low-class, the middle class, the people who don’t make a lot of money and cutting $900 million to schools,” he said after participating in the tractorcade Saturday. “That’s our future.

“Can’t he see what’s going on down here? I don’t think he wants to.”

Silas Bernardoni, a beef farmer from Darlington, said farmers would suffer under the budget cuts proposed by Walker.

“It’s rural areas that are going to be hit hardest,” he said. “Who lives in rural areas? Farmers. We’re in one of the poorest counties in this state.” . . .

Walker wasn’t around to see the massive rally; instead, he was off to a Republican fundraiser in Washburn, a rural community on Lake Superior in Bayfield County. But angry badgers didn’t leave him alone, the Duluth News Tribune reports in Wis. governor greeted at Washburn fundraiser by thousands of protesters:

Wisconsin’s protracted family fight over the budget and public employee unions moved to this Bayfield County town Saturday evening, as embattled Gov. Scott Walker spoke at an invitation-only event and was greeted by at least 2,000 angry protesters outside.

Walker arrived in a convoy of six unmarked police cars that pulled up at 5:45 p.m. to the Steak Pit for a Republican Lincoln Day fundraiser. The large, boisterous crowd, which had been lining the streets leading to the restaurant since 4:30, quickly recognized him and erupted in boos and shouts of “Recall Walker.”

The presence of the protesters more than doubled the number of people in the small town:

Bayfield County Sheriff Paul Susienka said Saturday evening that he didn’t have a crowd estimate, but various people had estimated the size at between 2,000 and 5,000. So the protest probably at least doubled the size of Washburn, which has a population of 2,271.

Susienka said there had been no incidents and no arrests.

No arrests occurred at the massive rally in Madison, either. The paper talked to the rally’s organizers:

Ron Borchers, a substitute teacher in Washburn, said he was among 24 people who organized the rally, which began Friday afternoon behind Stage North, a community theater and entertainment venue.

Borchers praised Washburn police, whom he said worked closely with the organizers to agree on ground rules.

Scott Griffiths, a freelance artist in Washburn, also was among the organizers.

“The thing that really got me here is the disparity of wealth that has grown way too out of hand,” Griffiths said. “This is not a Wisconsin thing. This is a global pandemic of wealth buying power.”

Recall Walker has posted a video:

Photo above: A sign from the Madison rally: “Now settle down kitty.” Photo by Rafael Morataya.