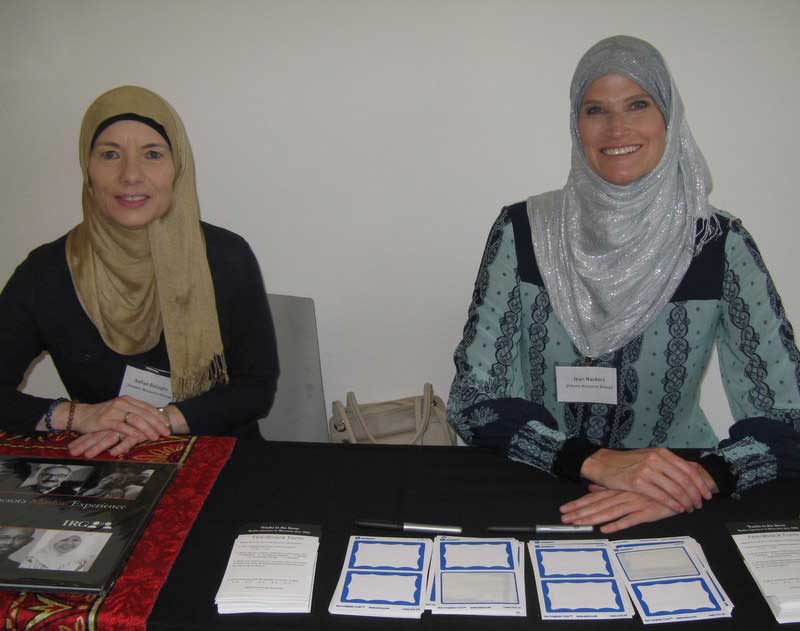 Safiya Balioglu, admistrator and speaker from IRG, welcoming folks into the reception

This Saturday, August 2, the community was welcome to attend the reception for Tracks in the Snow: The Minnesota Muslim Experience since 1880 at the Walker Art Center’s Medtronic Gallery. The touring exhibit has shown at the Minnesota State Capital and the MIA before coming to the Walker. Open since Thursday, July 31, the exhibit will continue to be available for viewing through Thursday, August 8.

Tracks in the Snow includes 25 portraits of Minnesotans of the Muslim religion, with diverse racial and ethnic backgrounds, from Bosnian American, to American of Lebanese descent, to American of Egyptian and Native American Heritage, to African American. Some are immigrants, some are refugees, and others, such as Representative Keith Ellison, converted to the faith–which he saw as a refuge from discrimination and racism.

Each portrait includes a quote from the subject and raises complex issues of identity. Even in a usually silent gallery, the quotes are exciting and inspire the kind of thought that needs discussion. “The main purpose is to get into conversations with people who come, and have people who come get into conversations with us–as representatives of the Muslim community here,” said Islamic Resource Group (IRG) speaker Safiya Balioglu, who staffed the informational table during the reception.

The exhibit is the third phase of the Minnesota Muslim Experience project created by The Islamic Resource Group (IRG). The project began with some 40 different interviews, which are now available as podcasts. From there, five different themes emerged: ‘We are diverse,’ ‘We’re Minnesotan,’ ‘We have deep roots,’ ‘We’re empowered,’ and ‘We are faithful.’ Five people who spoke to each of the themes were selected to be photographed on canvas.

Although the pictured folks have a a cross-section of different professions, many have vocations that circle around philanthropy or in some way make them leaders in the community. Women, such as Valerie Shirley, who became a Teacher of Deaf and Hard of Hearing after her son suffered hearing loss, are included among the community leaders. “A lot of people have the perception that Muslim women are oppressed—they don’t have their own opinion. . . We wanted to show that there are women who work in certain fields, who are out in public and contribute to society,” said Balioglu.

The goal of Tracks in the Snow is to provide insight into a community that is often misunderstood. A misconception that hurts me a lot is the notion that Islam is anti-Christian. I feel it’s important to spread the message that we love and revere the same prophets, have commonalities, and can treat each other with respect and dignity, reads a quote on Hoda Badawi’s portrait. The diversity of Tracks in the Snow explodes the notion that people of the Muslim faith are one monolithic voice.

“Muslims are mostly pictured negatively in the news–certain stereotypes are promoted,” said Baliglu. “We hope that we can correct some of those views that people come in with, and show them a different picture of what Muslims are all about.”

"Tracks in the Snow" reception

Safiya Balioglu, admistrator and speaker from the Islamic Resource Group, welcoming folks into the reception