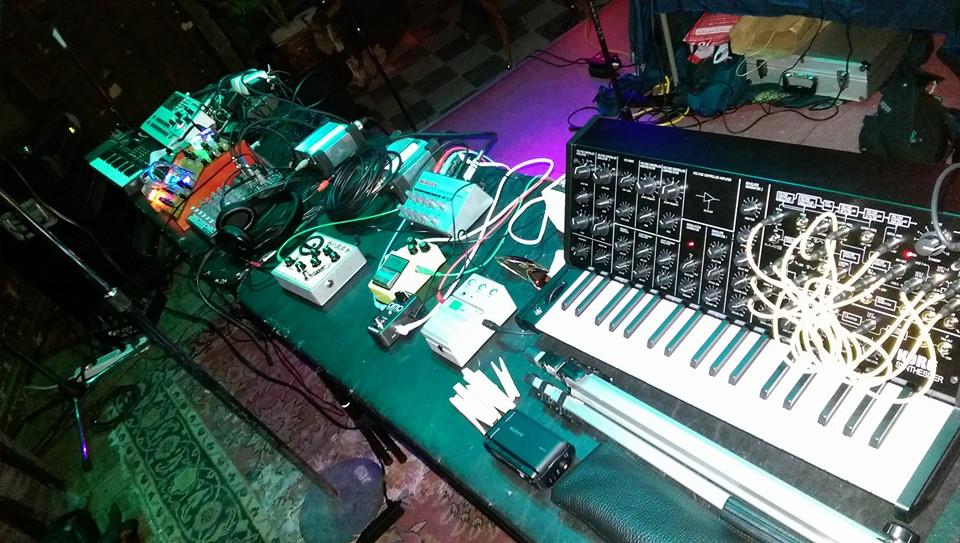 Last night I went to the first in a series of Noise shows at the Kitty Cat Klub. Every Monday in July, Kevin Cosgrove is gathering a wide assortment of Noise performers in what the City Pages called a revival of Noise. I suspect they are right.

The attendance last night was good. Many people had come specifically to the show – including potential performers and aficionados from as far away as Nashville. A few folks had stumbled onto the scene accidentally, such as the group of Shiners who had been in the area for a parade earlier in the day. It was fun to see the reaction to the shows from everyone.

On stage the range of performers was as varied: Noise paired with puppetry, a performer out for his second show ever and someone who hadn’t played publicly in two years. Usually I take copious notes at any show I plan to review – I didn’t do that last night. Really I was going to just soak it in but in the end I was moved to write up something.

I have been going to noise shows for about a year now. I find it intriguing. I enjoy them but I always feel a little bit like I do when I go to wine tastings, as if everyone in the room understands more than I do about what’s going on. Last night there was a performer reminded me of the rare glass of wine where even I could say without hesitation – that was good! Baculum played smooth Noise. It was loud. It was constant – it was as if we were in the note or a machine making a note and that note was all we could hear. He wasn’t rushed or scurrying. He just seemed to move a few dials and that modulated the note slightly. It was sustained and interesting in its slight nuance.

But my favorite part about Baculum was his hat, which read Fuck Art, Make Noise.

With wine I finally learned a couple of phrases that tricked people into thinking I knew what I was talking about and I just started drinking what I liked. I realized I could do that with Nosie too. I don’t have to get it. I don’t have to understand it all. And I only have to explain why I like it because I like thinking about it.

I walked in as Leisure Dynamics played while the Beheaddresses accompanied with a puppet show. It’s like Punch and Judy pound around the inside of Oscar the Grouch’s trashcan. I was glad for the Shriners that this was their introduction. Teaching I learned you go from the known to the unknown; puppets can help bridge that lesson. Puppets make everything more accessible.

Next was Breathing Singal. It was his second time performing in public. I think most of the folks at a Noise show perform Noise or want to. Subsequently everyone is supportive of a new performer. And he did a great job.

Finally was ANALSCUBAHIVE. Where Baculum is smooth; ANALSCUBAHIVE is complex. There are a lot more moving pieces and more theatrics. There are moments in the set where all of the moving pieces seem to get traction. I like that momentum. Then just as there’s a groove, something changes or screeches or drones. And that’s noise.

For something entirely different, the Tourniquet Noise series is worth checking out every Monday in July at the Kitty Cat Klub. It’s 21+ and free.