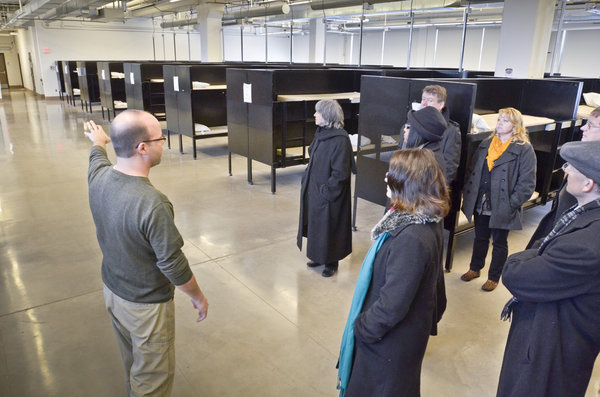 A former Minneapolis funeral home is now home for 16- to 19-year-olds in need of a safe, stable place to live off the streets as they transition from children to adults with responsibilities.

Opened two years ago in Nicollet Square, the building is once again full of life. The street-level bakery is a bustling neighborhood gathering spot that employs some of the former homeless teens who live upstairs in the 42 studio apartments known as Portico.

YouthLink and HIRED provide on-site supportive services and employment counseling for teens. Some have aged out of foster care; others are runaways from a troubled family, Portico Executive Director Lee Blons told members of the House Housing Finance and Policy Committee, who toured the facility on March 4.

Besides Portico, committee members toured several other types of homeless shelters, including the headquarters of Breaking Free, which provides housing and crisis intervention services for women and children trying to leave a life of prostitution and sex-trafficking.

The agency pledged $200,000 last year toward Breaking Free, whose annual budget is $1.3 million.

“The need is much greater than that, believe me,” said Rep. Karen Clark (DFL-Mpls), the committee chairwoman.

Another stop on the tour was two Habitat for Humanity homes in the Frogtown and Rondo neighborhood of St. Paul. The adjacent lots were just two of 20 homes in a two-block area that were foreclosed upon, said Andy Barnett, coordinating consultant for the Frogtown Rondo Home Fund. Located across the street from an elementary school and a few blocks from a new light rail station, the three-bedroom home is listed for sale for $135,000.

View a slideshow of the tour

For Rep. Paul Anderson (R-Starbuck), the “highlight” of the tour was visiting Higher Ground, a Minneapolis shelter operated by Catholic Charities, a short distance from Saint Mary’s Basilica.

“It was a new experience for me, and I was amazed at how well organized it was and how they try to treat the homeless, in this case all men, with a great deal of respect, to keep their dignity,” Anderson said.

Each night, men begin lining up outside for a chance to stay in one of the 251 bunks free of charge.

If they are drunk, they get a mat to sleep it off on a concrete floor. Sober men get a bunk bed with an electrical outlet, a small but important luxury. The men receive a meal and a shower but must leave by 7 a.m. The next morning, disappearing into the streets, public buildings or to low-wage jobs.

If they want to return that evening, they must wait their turn in line again, or those with $7 in their pocket can “pay to stay” on a higher floor of the shelter. Those left in line when the shelter is full shuffle down the street to the Salvation Army line, which begins accepting the homeless at 8 p.m.

The top floors are dormitory-style units reserved for people referred by counties for Group Residential Housing subsidies, which pay room-and-board costs for low-income adults through a negotiated monthly rate. Most are mentally or physically disabled and have been consecutively homeless for at least one year or four times within one year.

The housing agency contributed $12.7 million in non-profit housing bonds toward the construction of Higher Ground in 2009. There is nothing comparable in the state for women, according to Trista Matascastillo, government relations senior associate for Twin Cities Habitat for Humanity.

“The investment hasn’t been made yet to have something comparable for women,” Matascastillo said.

Passage Community Housing, a Minneapolis transitional housing program with one-, two- and three-bedroom units, is one of the few shelters that accept families. Operated by Simpson Housing Services, the 17-unit apartment building provides 90 minutes of tutoring each week for the children who are working below their grade level.

Rep. Peter Fischer (DFL-Maplewood) is director of finance and operations at Avenues for Homeless Youth. He said part of the problem with shelters is finding reliable and consistent funding sources.

“We need to be part of the solution and we haven’t been there,” Fischer said.

Tour organizers acknowledged that sites toured were some of the best Minnesota has to offer.

“One of the things I thought about at the end of the day was that we visited some really nice places and not all places are so nice,” said Rep. Rena Moran (DFL-St. Paul). “There is a need to house families in the community in a more dignified way and we can do that.”

The housing agency’s base budget is $76.9 million over the biennium. Gov. Mark Dayton is proposing an additional one-time investment of $13 million. The agency’s proposed funding is found in HF729, sponsored by Rep. Tim Mahoney (DFL-St. Paul). It awaits action by the House Jobs and Economic Development Finance and Policy Committee. Sen. Kari Dziedzic (DFL-Mpls) sponsors the companion, SF1057, which awaits action by the Senate Rules and Administration Committee.

Proposals before the Legislature

The following are a few of the bills heard in House committees this week that would appropriate state funds to decrease homelessness and provide supportive services:

A coalition called Homes for All anticipates a committee hearing on the bill next week. Its companion, SF811, sponsored by Dibble, awaits action by the Senate Finance Committee.