Get excited because the traveling bike festival known as Tour de Fat will be once again cycling its way to Minneapolis this month.

Beginning at 10 a.m. on July 27th, New Belgium Brewing will bring a “ballyhoo of bikes and beer” to Loring Park.

If you are unfamiliar with Tour de Fat, it is a free, family-friendly event that carries with it costumes, local food, eccentric entertainment, a parade, unusual bike contests and the joy of cycling.

The day opens with a massive bicycle parade that bobs and weaves through city streets, an event for all skill levels; all are welcome and imaginative costumes are encouraged. For the remainder of the afternoon, the stages light up with wild and exciting acts all while the park becomes a celebration like none you have seen. 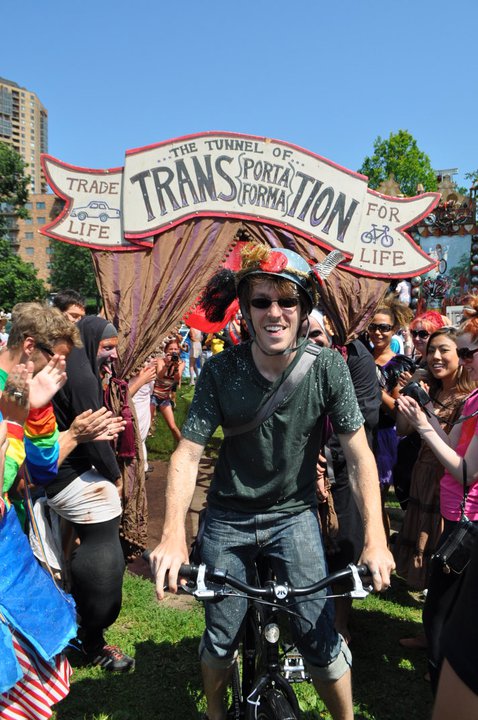 “The pinnacle of Tour de Fat is the ceremonious car-for-bike swap. At each of the 15 Tour de Fat stops, one person will become the center of the show as he or she gets up on stage, hands over their car keys and pledges to live one year car-free. Each car-for-bike swapper will choose a local bike shop to help turn a $2,250 budget into an ultimate car-replacement commuter bike. Vehicles for Charity will auction the cars, with proceeds,” says New Belgium.

Other tents and attractions include the crowd-pleasing Lips of Faith Tent, the Le Tigre Tent, Port-a-oke, Bike Pit, and Slow Ride.

Join us in Loring Park to see what TDF is all about. For more information visit the New Belgium Brewing TDR webpage http://www.newbelgium.com/events/tour-de-fat.aspx.