When we first started planning this trip, at the top of the must-do list was “biking though the tulip fields”. But when we started figuring out when the dates of my break were, we realized that late March would probably be a little early for tulips. We were right, but it wasn’t early by too much. Even though we weren’t able to see the fields in full bloom, we did get an early glimpse of color.

We intentionally saved Amsterdam for the end of the trip to give the flowers an extra week – and we saved the bike ride until the last full day before coming home. It was a cool, sunny day, and it would have still been great even if there hadn’t been ANY flowers. There’s an amazing system of bike paths and dedicated lanes all over the flower-growing area to the southwest of Amsterdam and it was a joy just to be out riding around the countryside. 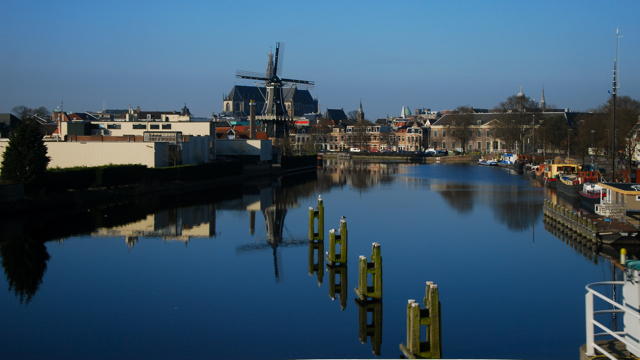 We took the train from the Amsterdam Central Station to Haarlem, which is only about 10 miles away. It’s a short walk into the city center from the train station. Haarlem is a beautiful small city and is a great place for a quick break from Amsterdam. But we were mostly using it as a jumping-off point for a bike ride, so we just walked around a bit and then headed out. It was a quiet Sunday morning – nothing open until later in the day. 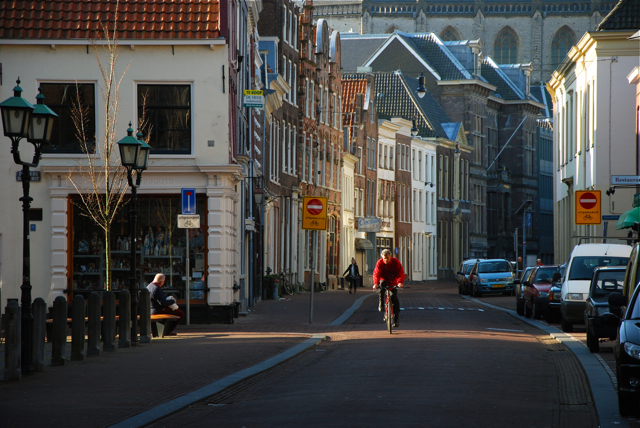 Renting bikes at the Haarlem train station was easy and cheap – €6.50 for the whole day, and they’re open until midnight! One slight drawback was that they only had single-speed backpedal-brake models. Not a big deal for us, but it might be for you.

Armed with nothing more than a comically undetailed map in a guidebook, we headed out of town in a generally southerly direction, hoping to find one of the two roads shown on the map. The “plan” was to see some flower fields in bloom and make it down to a place called the Keukenhof, which is basically a big flower park near the city of Lisse. Since everything in the Netherlands seems easy to do (compared to most other European countries) we weren’t too worried about find our way. We had all day and were up for heading out into the unknown nederland.

Not long after we got out of town, we starting seeing fields of daffodils and other early-bloomers.

Much to our delight, the Dutch have made it simple for morons without a map to bike all over the place without getting lost. The system of trails and bike lanes in this area is truly amazing. There are numbered signs with maps on them that seem to be spaced exactly as far apart as you need them to be. The road and path surfaces are smooth, lanes wide and traffic light (at least on a Sunday). Some of the bike baths go through wooded areas, past cattle and sheep farms, small towns, residential areas, as well as the bulb fields. Here are a few pictures to illustrate the types of things you’ll see as you wander around. 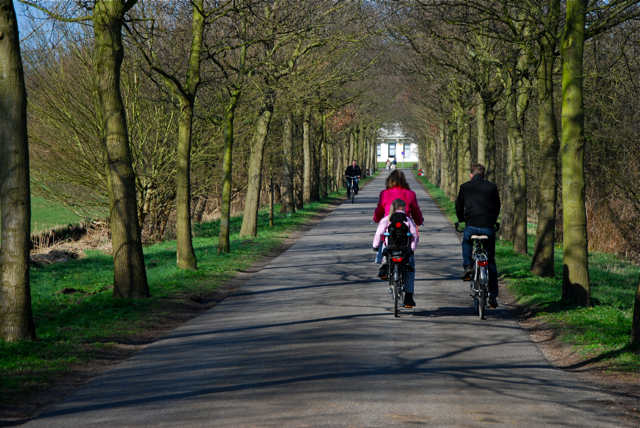 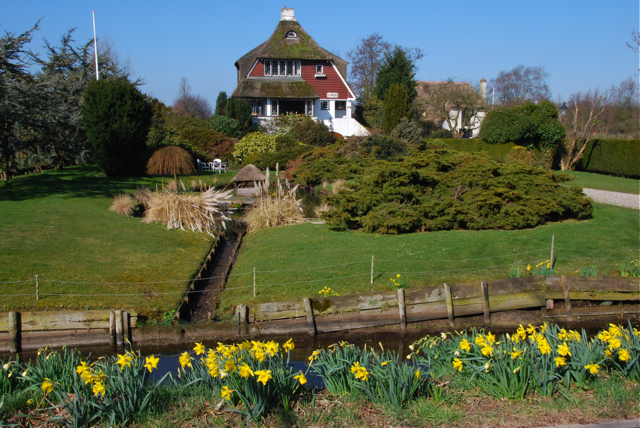 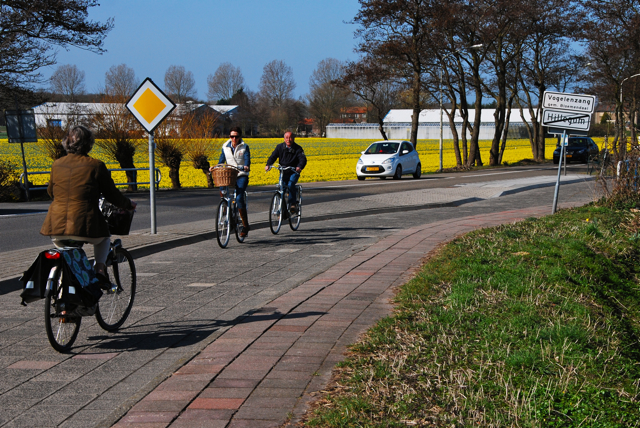 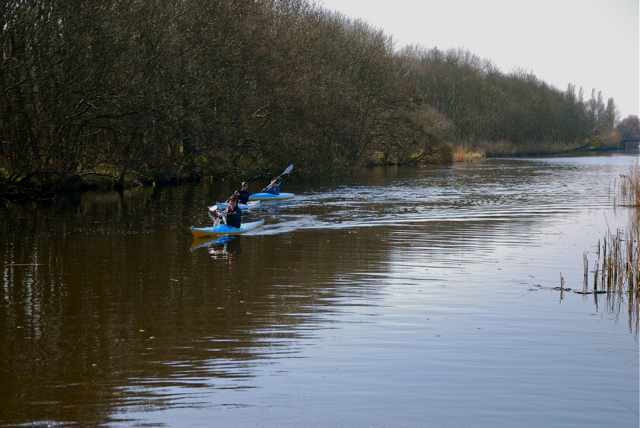 We stopped at the Keukenhof, looked around at the gift shop for a minute and decided not to go in. At a hefty €12 or €13, we decided to do on the next trip. It had only been open for the season for a few days, so it wouldn’t be in full bloom, plus we were enjoying the scenery so much, we just wanted to keep biking.

A mile or so from the Keukenhof is Lisse, a quiet, pleasant town where we decided to find a place to each lunch. We stopped at an unassuming little Italian restaurant called Ristorante Piccolo that was just opening up for the day. They had a couple of tables outside. A French-speaking group of four took one and we took the other. The very friendly owners (possibly husband and wife) apologized because the oven was not hot enough for pizza yet. They brought us some bread and tasty spreads, and because we had to wait, followed a few minutes later by some bruschetta and another apology.

This place doesn’t look like anything special from the outside, but it really was. (photo by Steve Date)

Sitting in the 60-degree sun, having some good food – pretty nice. By the way, the pizza was great, too. Just one of those places you stumble on that make you glad you took this trip. 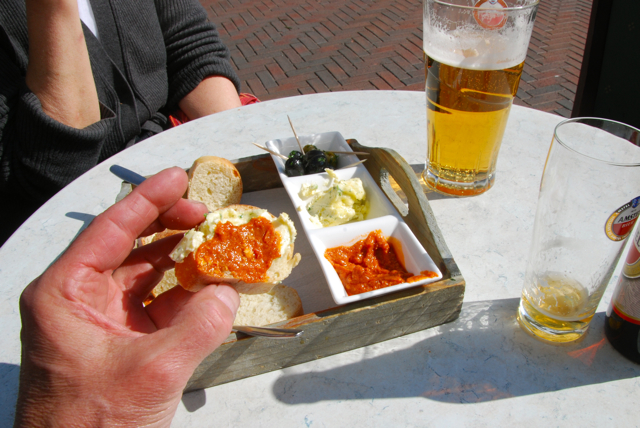 Keep apologizing! – the pizzas can wait.

Stomachs full, it was back on the road. We decided to go a few kilometers farther south, to a town called Sassenheim, just north of Leiden, before heading back toward Haarlem. Here are a few more photos from that part of the ride. 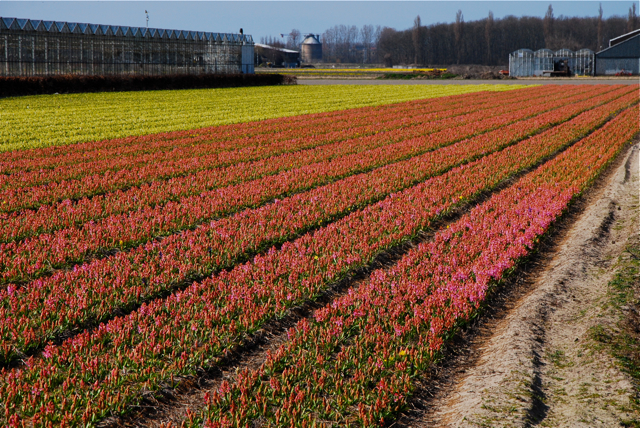 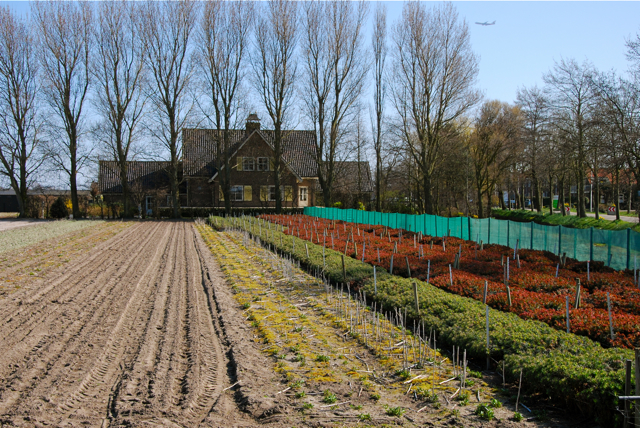 I’m not sure if it comes through in the photos, but it was great – beautiful day, beautiful scenery, beautiful people (the people we met, not us).

Time for a quick jaunt over to the ocean before we return the bikes in Haarlem? Sure, let’s give it a shot.

The path takes us past some dunes and a nice looking golf course called the Kennemer Golf and Country Club. 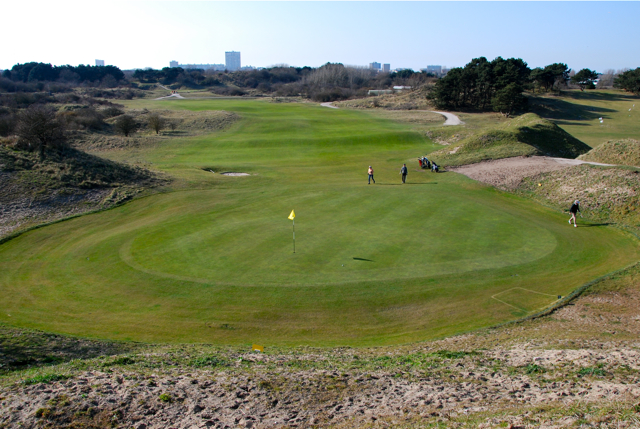 Soon we were at the sea shore, a place called Zandwoort. It seemed kind of strange to suddenly be at a beach resort area. I’ll bet it’s pretty nice in the summer.

We were getting tired and had a few miles to get back to Haarlem, so we didn’t stay long at the beach. There are some great residential neighborhoods between Haarlem and the ocean. Seems like the ideal place to live if you have money and want to live outside, but near Amsterdam. 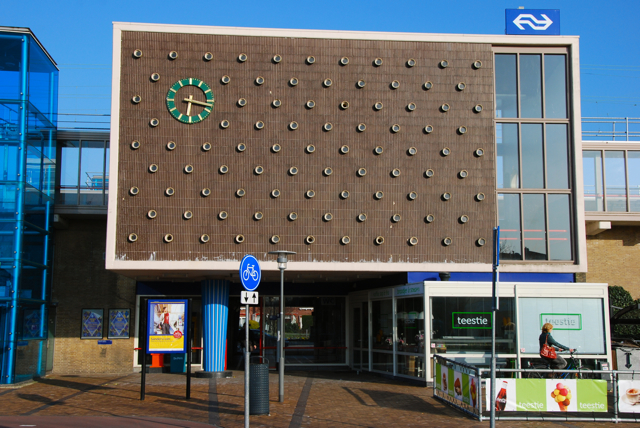 Just ouside Haarlem. No reason for the photo other than I really like the building. Reminds me of a radio we had when I was a kid.

The sun was going down when we got back to our place. I really didn’t want to go home the next day. That’s the sign of a successful vacation, I guess.

Usually not one to go for superlatives, Mrs. D declared it “the best day I’ve ever had on one of our trips”.

I cannot (and of course, would not) argue with that. But I might add that the other days were also pretty darn good.

For many more photos from the trip, go to my Flickr collection from the whole trip here.

(All photos by Steve Date)

Home again in Amsterdam. The last rays of sun hit our room just above the Cotton Club in the center of the picture.

P.S. One more photo – as we were flying out the next morning, we went over some of the area we had biked. You can see the beach town of Zandwoort, the golf course in the upper left, and some of the grass-covered dunes between Haarlem and the ocean.